Volatility is the name of the game in the cryptocurrency market and the Nov. 11 evening sell-off in the price of Bitcoin (BTC) is a reminder that new all-time highs are often followed by sharp whipsaws to underlying support levels. Data from Cointelegraph Markets Pro and TradingView shows that after dropping to a low near $62,800 late on Nov. 10, the price of Bitcoin managed to claw its way back up to the $65,000 level where bulls now look to consolidate and regroup for another push higher. 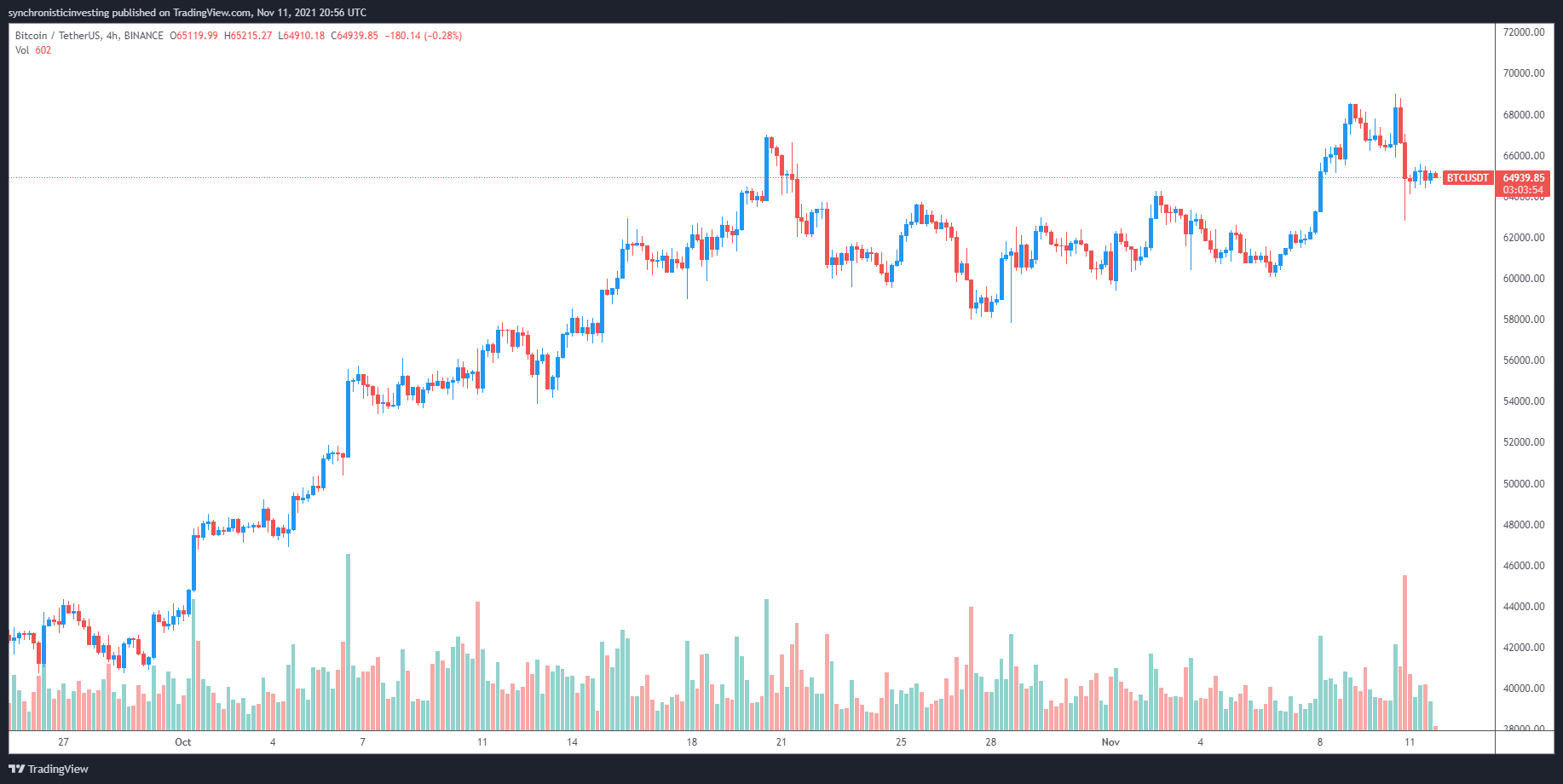 Here’s a look at what analysts are saying about the outlook for Bitcoin and the cryptocurrency market as concerns about rising inflation dominate the news headlines in the U.S.

The sight of a rapid $7,000 decline in BTC may have come as a shock to some, but for analyst and pseudonymous Twitter user ‘Nunya Bizniz’, the price action over the past couple of days is par for the course and transitory in nature based on Bitcoin’s past performance. Breaking News Alert:

Bitcoin Dips are Transitory! pic.twitter.com/DdpL8ggHRoAs observed in the chart below which shows the Bitcoin price along with its 20-day moving average (20-MA), it’s common for a run-up in the price of BTC to be followed by a pullback that touches or briefly dips below the 20-MA before once again heading higher.

Evergrande and inflation affect the market

Insight into the macro factors at play was provided by Jean-Marc Bonnefous, head of asset management at Tellurian ExoAlpha, who highlighted the fact that “there has been much talk about the impact of the Evergrande story on the recent sell-off in the market.”As a way to make the development more relatable to cryptocurrency holders, Bonnefos stated that the “Evergrande news is to equities what Elon Musk tweets are to cryptos” in that it is “somewhat manipulated news to move markets.”According to Bonnefos, “the crypto markets seem to be overreacting” to the headlines, and “the recent dip is probably more of a technical consolidation after the sharp rally of the last few days.”And it’s not just negative headlines about Evergrande and tweets from influencers that are affecting the price action in the crypto market. According to Bonnefos, the recent 6.2% rise in the U.S. Consumer Price Index (CPI) also points to a major factor influencing the global financial markets and the price of Bitcoin. Bonnefous said,

Bitcoin is in the process of a necessary retest

A final word of encouragement was offered by analyst Twitter user ‘GalaxyBTC’, who posted the following chart outlining one possible trajectory for the price of BTC to reach $75,000 in the short-term.

The analyst said, The overall cryptocurrency market cap now stands at $2.847 trillion and Bitcoin’s dominance rate is 43.1%.The views and opinions expressed here are solely those of the author and do not necessarily reflect the views of Cointelegraph.com. Every investment and trading move involves risk, you should conduct your own research when making a decision.

OMG price crashes by one third after BOBA airdrop snapshot