The weekend is upon us and fear remains the dominant short-term sentiment in the cryptocurrency market. Earlier on Dec. 11, Bitcoin (BTC) price dropped to $47,250, and investors are biting their nails after data from the United States consumer price index (CPI) shows inflation reaching a forty-year high at 6.8%.Data from Cointelegraph Markets Pro and TradingView shows that a midday push by bulls to reclaim the $50,000 support level was handily defeated and sellers sent the price back below $48,000, which could possibly force another daily lower high for the top-ranked cryptocurrency. 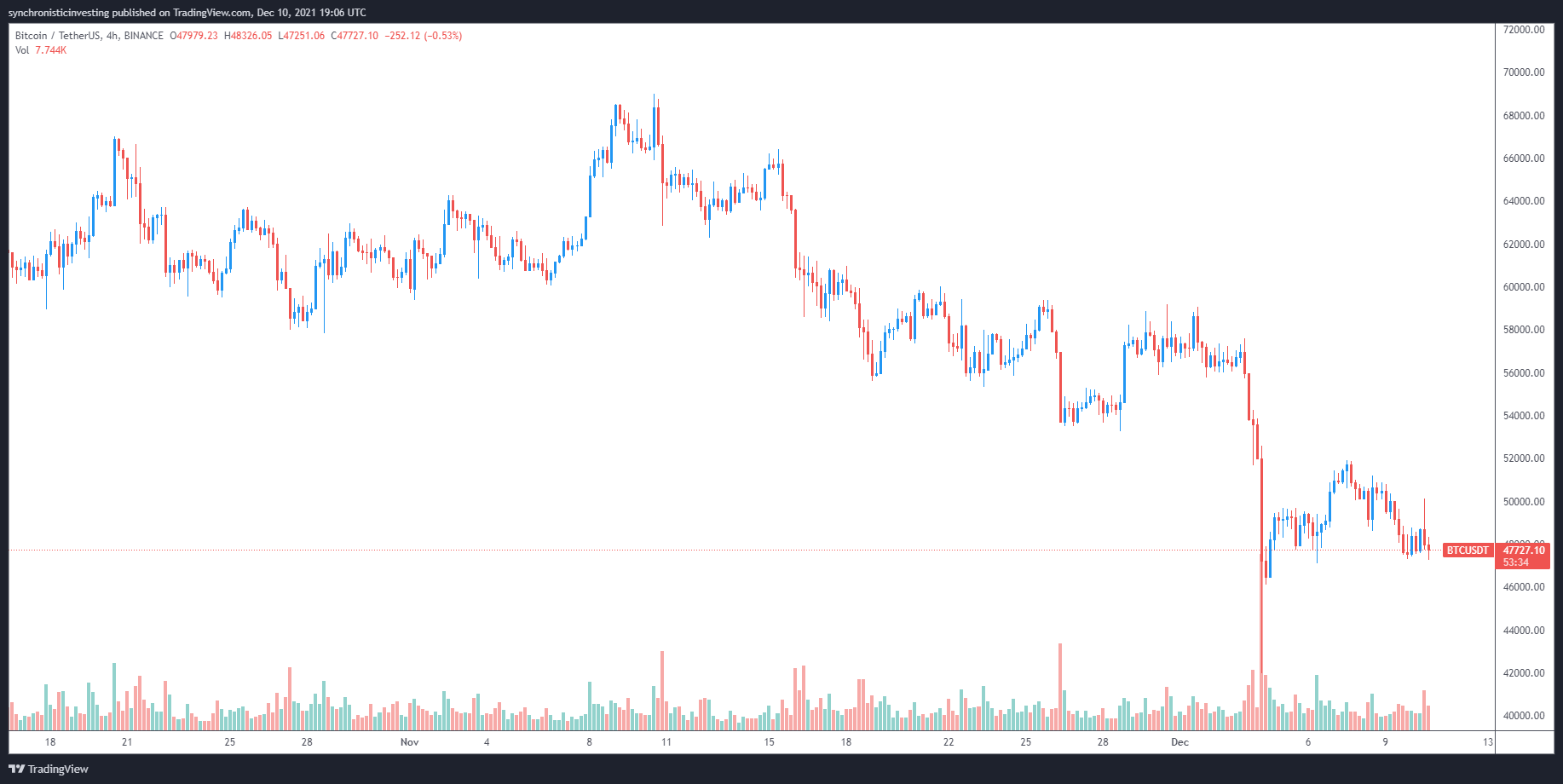 With the prospect of a major run up in price to end the year all but dashed, traders have shifted their attention to managing risk and identifying the best levels to buy dips. Here’s a look at what analysts are saying about Bitcoin’s outlook heading into 2022.

Open interest wipeout “will give way to further upside”

As seen in previous instances where the price of BTC saw a rapid decline, there has been a significant decrease in the open interest (OI) for BTC on derivative exchanges, as highlighted in a recent report from Delphi Digital. The report noted a 50% decrease in OI after this latest market downturn, as over-leveraged longs positions were decimated.

While the experience was likely an unpleasant one for traders who were overexposed, the analysts suggested that deleveraging events like this are beneficial over the long term and will often “give way to further upside,” as the previous froth and over-exuberance are replaced with a more measured trading environment. The sharp reduction in OI over the past month may also be signaling that the short-term bottom for BTC may be in accordance with Delphi Digital, and it’s possible that the current sell-off could be reaching the point of exhaustion. Delphi Digital said,

Range-bound trading for BTC until 2022

According to Ben Lilly, co-founder of Jarvis Labs, the price of Bitcoin is likely “to stay in this trading range until at least the end of the month,” mainly due to the fact that Dec. 31st marks “the largest open interest in terms of open contracts.”Lilly highlighted previous instances of major drawdowns resulting in a high number of liquidations as part of the reasoning. He explained that the market has typically taken some time to build momentum after these pullbacks.

Should traders look for continuation of the uptrend?

A final bit of insight was provided by analyst and pseudonymous Twitter analyst Rekt Capital, who posted the following chart of BTC price trading between two key exponential moving averages. 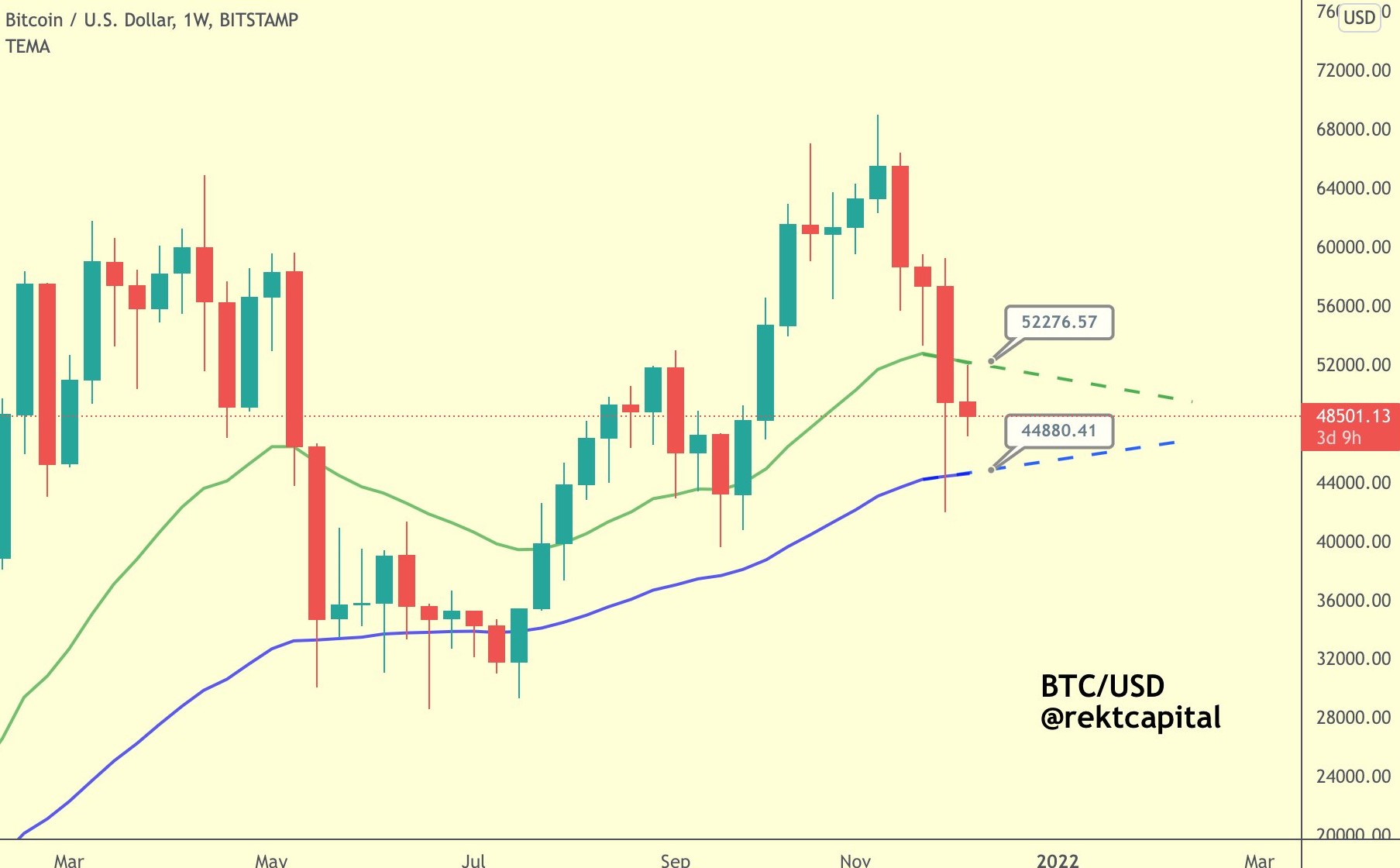 Rekt Capital said, The overall cryptocurrency market cap now stands at $2.238 trillion and Bitcoin’s dominance rate is 40.7%.The views and opinions expressed here are solely those of the author and do not necessarily reflect the views of Cointelegraph.com. Every investment and trading move involves risk, you should conduct your own research when making a decision.

The Metaverse will bring unbridled evolution to NFTs

Shiba Inu falls after $2.3B of SHIB moved from whale wallet