ApeCoin (APE), the new cryptocurrency that was recently launched by Yuga Labs, aims to be the bedrock of the Otherside metaverse and recently, the token has experienced massive volatility leading into and after its digital land sale. APE’s price dropped from $26 at the peak on Apr. 28 to $14 on May. 2 — more than a 45% drop within a few days of the mint. The price has now dropped to the $6 range.Given the current volatility, investors will be wondering if ApeCoin price will ever recover to its previous trading range. Let’s first take a look at the historic price trend, particularly what happened on the Otherdeed mint day; then take a deeper dive into the amount of APE that will be locked and released in the next three years. This will provide a better understanding of the supply and demand dynamics that could affect the price going forward.

ApeCoin surged after the Otherdeed announcement

In the first couple of days since APE’s listing on March 17, 2022, the price jumped from roughly $7 to $17 at the peak ; an increase of 143%! The price had since fluctuated between $10 to $15 until rumors began circulating of the Otherside metaverse land sale. 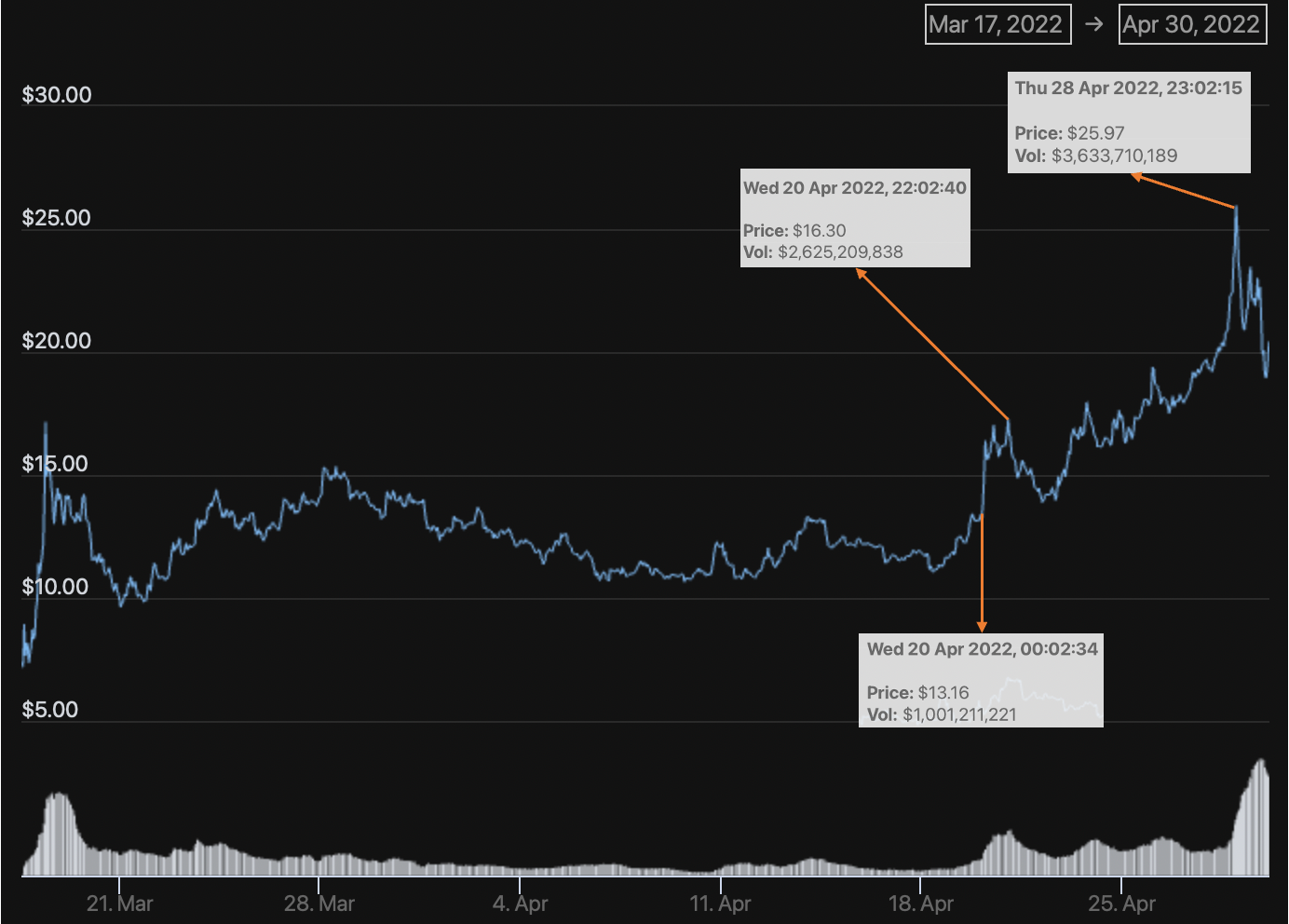 The chart above shows APE made a sharp move up of almost 24% within a day from $13.16 to $16.30. When the Otherdeed rumours surfaced on Twitter on April 20, APE catapulted to $26 on April 28 after the sale was officially confirmed by OthersideMeta two days prior. 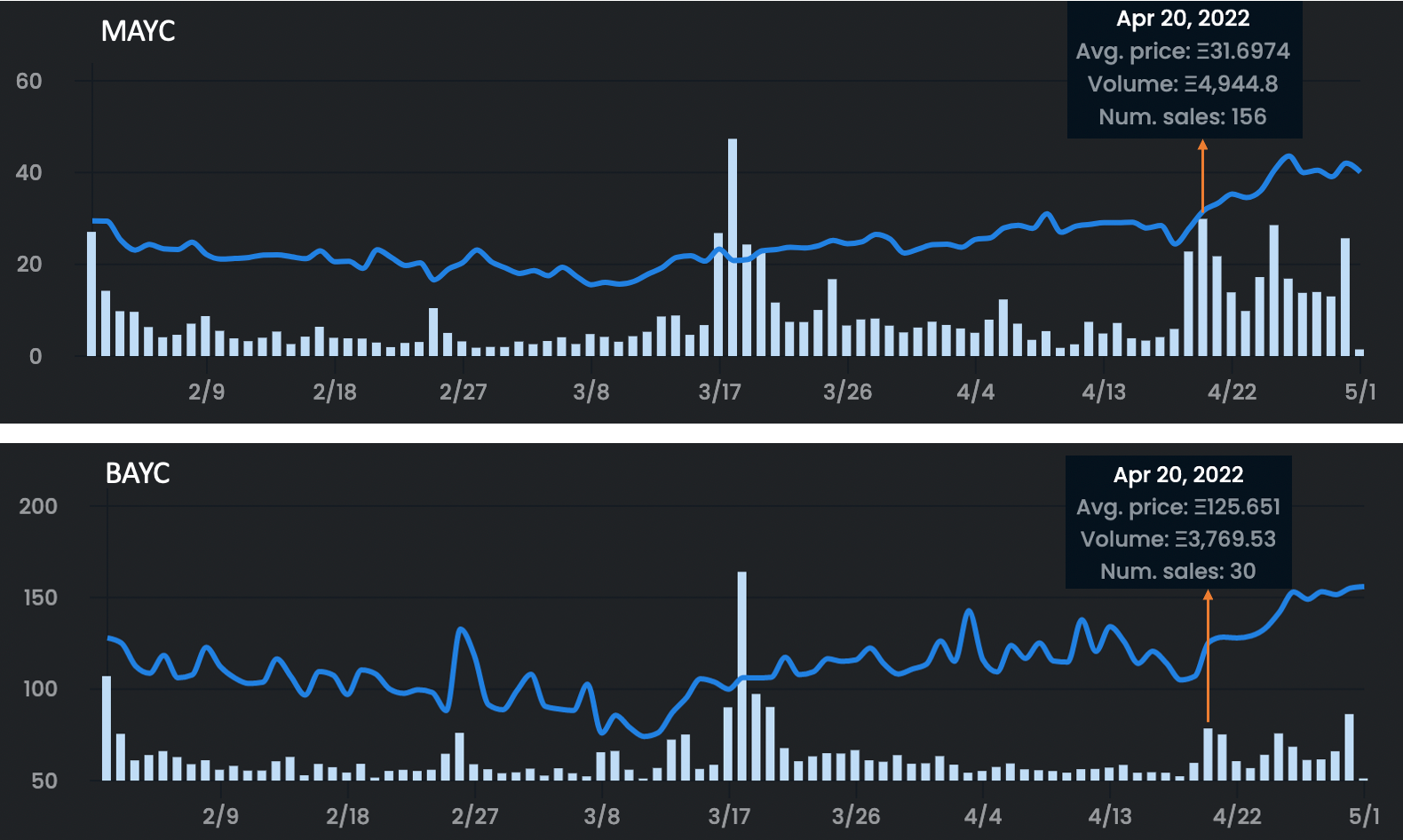 Chaos ensued as Yuga confused users during the Otherdeed sale

Otherdeed was seen as an opportunity for new investors who have been priced out of BAYC, MAYC and BAKC to become part of the Ape community.The bullish conviction toward APE was driven by the fact that it is the only currency in the Otherside metaverse and the land sale in the secondary market would also be traded in APE in addition to ETH. Investors who believed in Yuga Labs and the idea behind the Otherside metaverse rushed to acquire APE in preparation for the mint at the price of 305 APE per plot. The increasing demand for APE as the minting date approached was broadly expected and the increase in price pre-mint was also foreseeable.What came as a shock later  is how chaotic the whole process of minting Otherdeeds was. APE’s price plunged from $24 to $14 on May 2, which reflected a more than 40% decrease in two days! The immediate price drop to $20 on the day of the mint could be explained by the sudden decrease in demand for APE after the mint started. A further 30% drop in the following two days is a clear reflection of investors’ loss of confidence in the project after the mint debacle. BAYC and MAYC price also reflected the same sentiment by falling more than the market value of the airdropped Otherdeed.Despite efforts made by the Otherside team to verify new investors through a Know Your Customer (KYC) process before the mint and to offer the sale at a fixed price, these measures were not enough to prevent a gas war. The information was not clear and sometimes plain wrong prior to the mint and a significant amount of money has been misspent and burnt on gas as a result of the poor communication by Yuga Labs.What follows are some of the major issues encountered by investors on the day of the mint.

What happened to the Dutch auction?

On April 26, OthersideMeta tweeted that the mint would be a Dutch auction but three days later they changed their mind and said “Dutch auctions are actually bullshit,” a complete pivot and a brutal slap in the face to investors.A Dutch auction would have been an effective way to mitigate gas wars due to its unique design of a very high start price and a decreasing price over time. Investors could have chosen to mint at the price they could afford at different times, avoiding everyone minting at the same time, at the same price, and creating a gas war.Mint will be Dutch auction style, so the ApeCoin price will decline over time. The starting price of the Dutch auction will be announced later this week.

After the team delayed the mint date, APE price experienced some of the largest hourly downside re-pricings.The hourly chart below shows APE increased slightly in the first three hours after the originally planned mint time, then dropped from $22 all the way to $18 by the time the actual mint took place at 9 pm EST (1:00 am UTC). It is hard to say if the delay exacerbated the downward pressure, but the price fluctuation in APE significantly increased the risks taken by investors, especially when the mint was not even guaranteed for the KYC’d wallet holders. 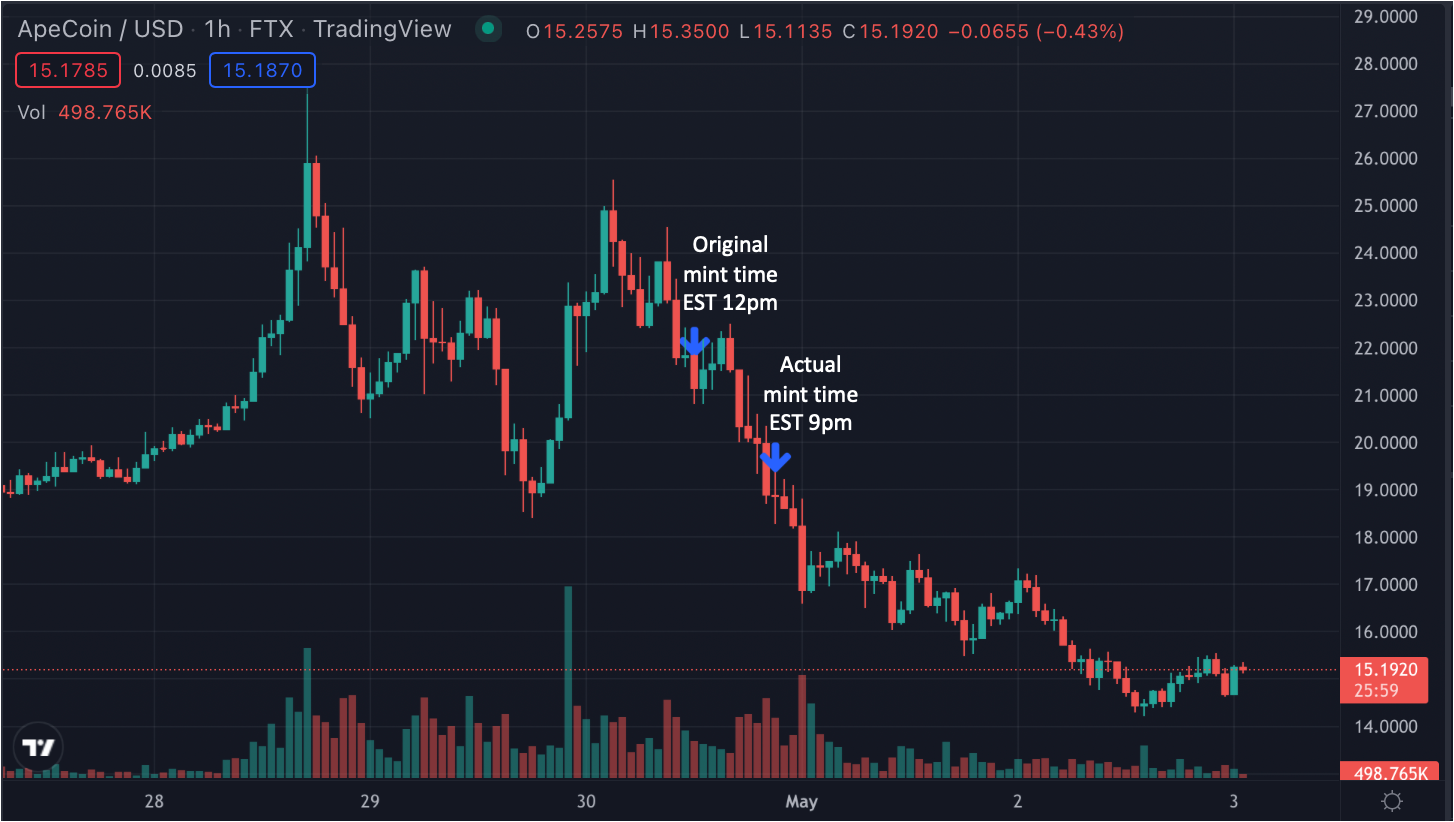 This was the biggest issue and misunderstanding in the whole minting process. Based on Otherside’s article, at the start of the sale (wave 1) each KYC’d wallet would only be allowed to mint 2 plots. Once the gas fee came down, the limit would rise to an additional 4 NFTs (wave 2). Since the number of KYC’d wallets are not disclosed to the public and there is only a fixed amount of plots to mint, it is uncertain whether all KYC’d wallets could mint at least one. Assuming a maximum of 6 plots of land per wallet given the total of 55,000 plots, to guarantee each wallet can mint at least one plot, the maximum number of KYC wallets allowed should be 9,166. It turned out there were far more KYC’d wallets than this number and many investors failed to mint anything after paying a very high price to acquire APE and experiencing stratospheric gas fees during the mint.

Waves 1 and 2 were designed to mitigate the gas war by limiting the number of plots each wallet can mint. The problem was the total number of KYC’d wallets was too large. The number of people rushing to mint at the same time was not reduced and gas fees never came down. While the early minted NFTs were selling in the secondary market for two or three times more than the cost of the mint, the demand for further mints and the ferocious gas war continued until all 55,000 plots were gone. Numerous users paid between 2.6 ETH and 5 ETH for gas fees during the process and many lost their entire fee due to transaction failures across the Ethereum network

According to OthersideMeta, all APE earned during the mint will be locked up for one year. This is over 16 million APE (55,000 * 305) taken out of the circulating supply. Will this reduction in supply save the APE price? Unfortunately not. Compared to the amount of APE being unlocked and released into the market every month, 16 million is a drop in the ocean.Looking at the amount of APE that will be unlocked in the next three years on a monthly basis, the majority of the supply comes from the DAO Treasury and Yuga Labs. There are also three large pumps in supply from the contributors in September 2022, March and September 2023. 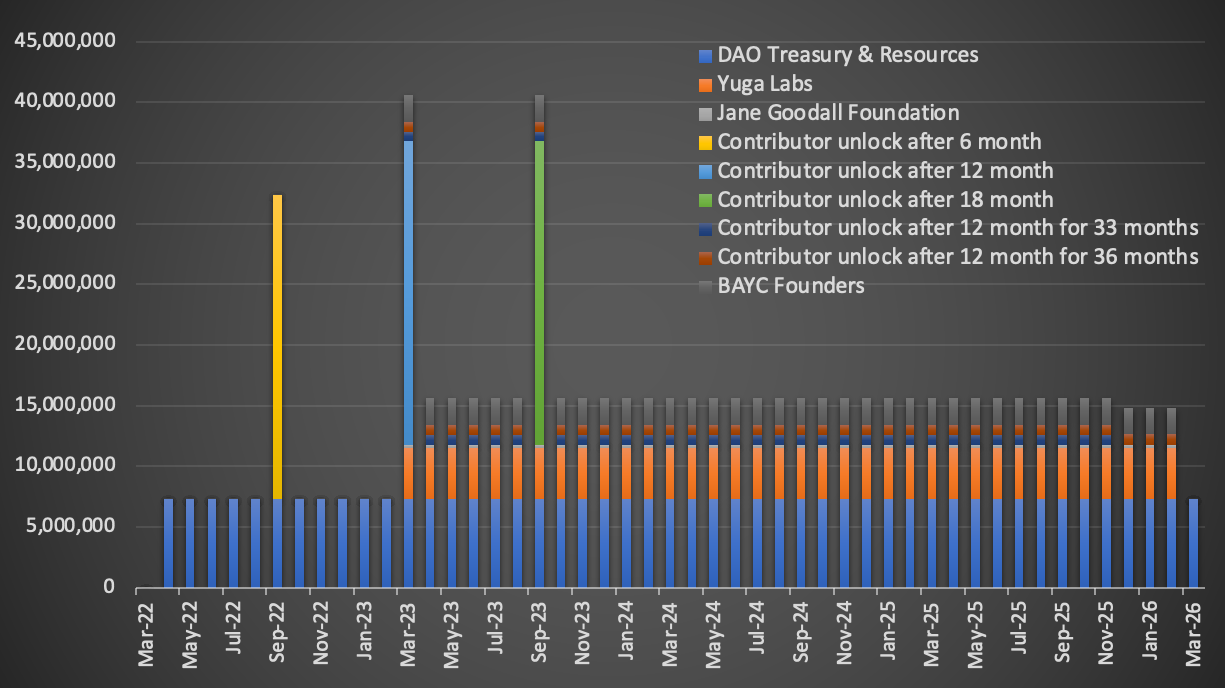 On a cumulative basis, the initial amount of APE unlocked at launch day dominates the proportion of supply until May 2025, when it is overtaken by the DAO Treasury. At the rate of 7.3 million APE being unlocked per month for 48 months until 2026, the DAO treasury’s allocation is the main source of additional APE inflation. 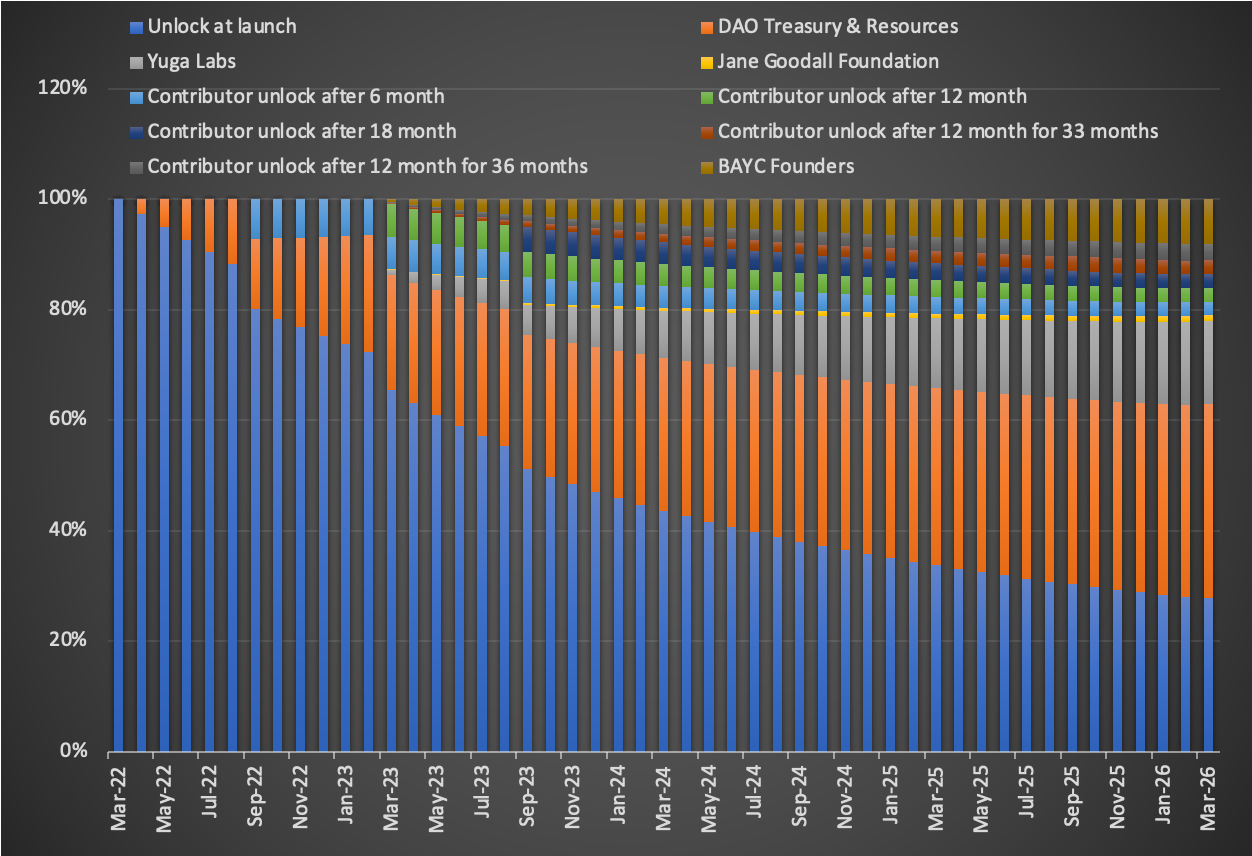 Given the estimated circulating supply of APE in April 2022 is around 284 million, the 16 million APE locked up from the Otherdeed land sale is only 5.9%. Such a small amount of one-time supply reduction is unlikely to have a long-lasting effect on the APE price, especially when supply keeps increasing. 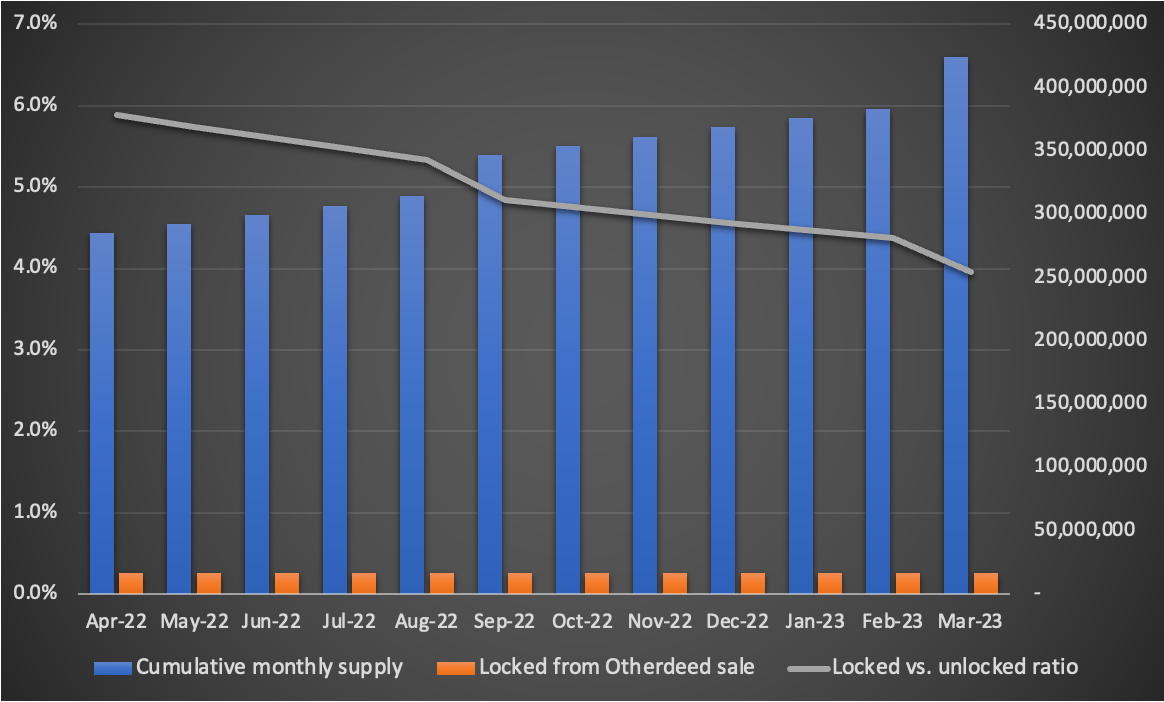 Trading volume is the only potential saviour for APE price 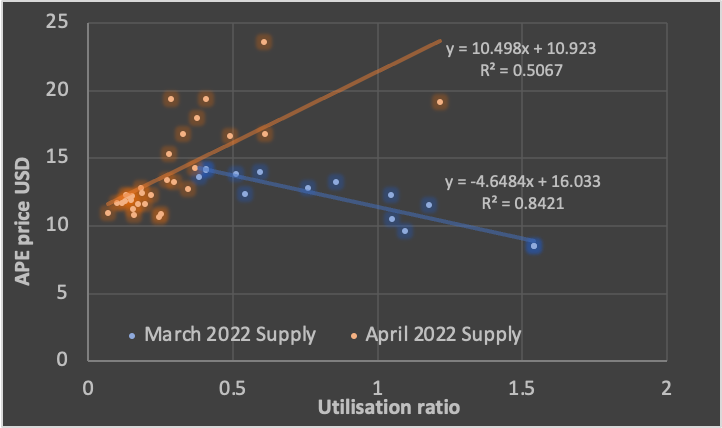 If the positive correlation between the utilization ratio and the price holds true while circulating supply keeps increasing gradually, it seems the only savior for the APE price is an increasing amount of trading volume.However, APE will struggle to attract more trading volume after the chaotic Otherdeed land sale. Yuga Lab’s tweet about turning off lights on Ethereum and building their own chain seems to have exacerbated the investors’ loss of confidence. We’re sorry for turning off the lights on Ethereum for a while. It seems abundantly clear that ApeCoin will need to migrate to its own chain in order to properly scale. We’d like to encourage the DAO to start thinking in this direction.The implications of this tweet are profound. Ethereum has a long, stable track record of security and stability, designed and built by, arguably, the smartest and most established crypto talents in the world. It is more than concerning if Yuga Labs moves away from Ethereum and people have rightly ridiculed this on Twitter.Yuga’s NFT collections derive their extreme valuations largely because they sit on Ethereum and users trust the network to hold their highly valued NFTs. How would any migration away from Ethereum take place? Would users trust a home grown chain from Yuga Labs? No other chain has tokens trading in the price strata as the blue chips that trade on Ethereum.It would be reasonable to assume that APE and Ape-related NFTs could significantly re-price from their meteoric valuations if Yuga Labs was to follow through with the idea of managing their own chain to house their collections. We have seen what happened with Axie Infinity on the Ronin chain. APE could be up for a bumpy road ahead.The views and opinions expressed here are solely those of the author and do not necessarily reflect the views of Cointelegraph.com. Every investment and trading move involves risk, you should conduct your own research when making a decision.

Bank of England: Any UK CBDC Will Be ‘Tens of Thousands’ Times More Efficient Than Bitcoin