On Thursday Avalanche’s (AVAX) price hit a new all-time high at $68.89, and over the last few months, the project has risen to challenge the Ethereum network’s dominance among smart contract platforms. According to the project’s website, the layer-one protocol is capable of surpassing 4,500 transactions per second (TPS) with a time to finality of less than 2 seconds. Data from Cointelegraph Markets Pro and TradingView shows that since hitting a low of $32.10 on Sept. 7, the price of AVAX has rallied 111% to establish a new all-time high on S as its 24-hour trading volume spiked 200% to $2.8 billion. 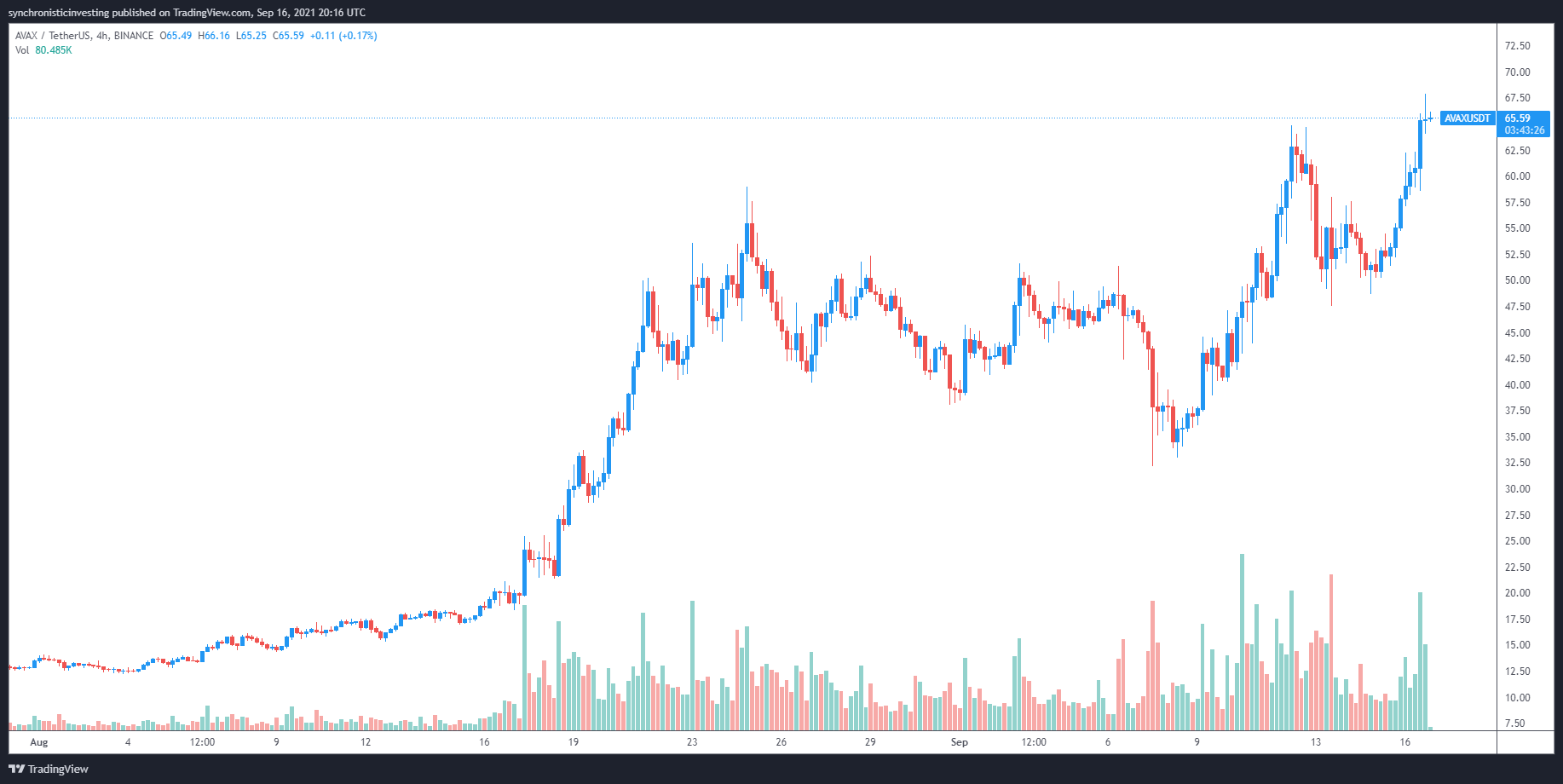 Three reasons for the surging price of AVAX include the recent completion of a $230-million investment round by large capital funds, the continued migration of liquidity to the Avalanche network, and new integrations and protocol upgrades that help improve the user experience.

The jump in momentum seen in AVAX’s price on Thursday came following the announcement that a handful of large funds, including Polychain Capital, Three Arrows Capital and Dragonfly capital, took part in a $230-million funding round for the project. This marks the largest investment into the Avalanche ecosystem to date and indicates that larger institutional players are starting to take a keen interest in the Ethereum competitor. The Avalanche network is cross-chain compatible with Ethereum, meaning any tokens or projects that operate on Ethereum can fully migrate to the Avalanche ecosystem and take advantage of its higher throughput capabilities and lower transaction costs. With no definitive date on when Ethereum 2.0 will be fully operational or what its final capabilities will be, networks like Avalanche now have an opportunity to make the case for why they are a better choice, which could lead to an increase in their market share.

A second reason for the building strength seen in AVAX has been the continual migration of assets from networks like Ethereum to Avalanche to participate in its growing decentralized finance (DeFi) ecosystem. Evidence of the asset migration can be found in the total value locked (TVL) data provided by Defi Llama, which shows that the TVL on Avalanche has been climbing rapidly since Aug. 19 and reached a new record high of $2.17 billion on Thursday.

The rise in TVL is largely due to the launch and growth of several successful DeFi protocols on Avalanche, including Benqi (QI), Trader Joe (JOE) and Pangolin (PNG).

A third factor that has helped boost the value of AVAX has been a series of partnership and integration announcements that have excited investors and put the spotlight on the project.The Avalanche nonfungible token (NFT) ecosystem has seen an influx of interest thanks to a partnership with the sports card and memorabilia company Topps, which launched its “Inception” NFT digital collectibles series on the network.There is also a vote underway in the Aave community, one of the top DeFi protocols in the cryptocurrency ecosystem, to see if investors want to see Aave launch on the Avalanche network. A vote of approval could lead to a further increase in TVL on Avalanche, as assets held in Aave on Ethereum have the potential to be migrated to Aave on Avalanche. The @AaveAave proposal is live!

If you’re part of the $AAVE community and would like to see Aave deployed on #Avalanche, please put your vote in now: https://t.co/Bx4jbUq6mOAccording to data from Cointelegraph Markets Pro, market conditions for AVAX have been favorable for some time.The VORTECS™ Score, exclusive to Cointelegraph, is an algorithmic comparison of historical and current market conditions derived from a combination of data points including market sentiment, trading volume, recent price movements and Twitter activity. 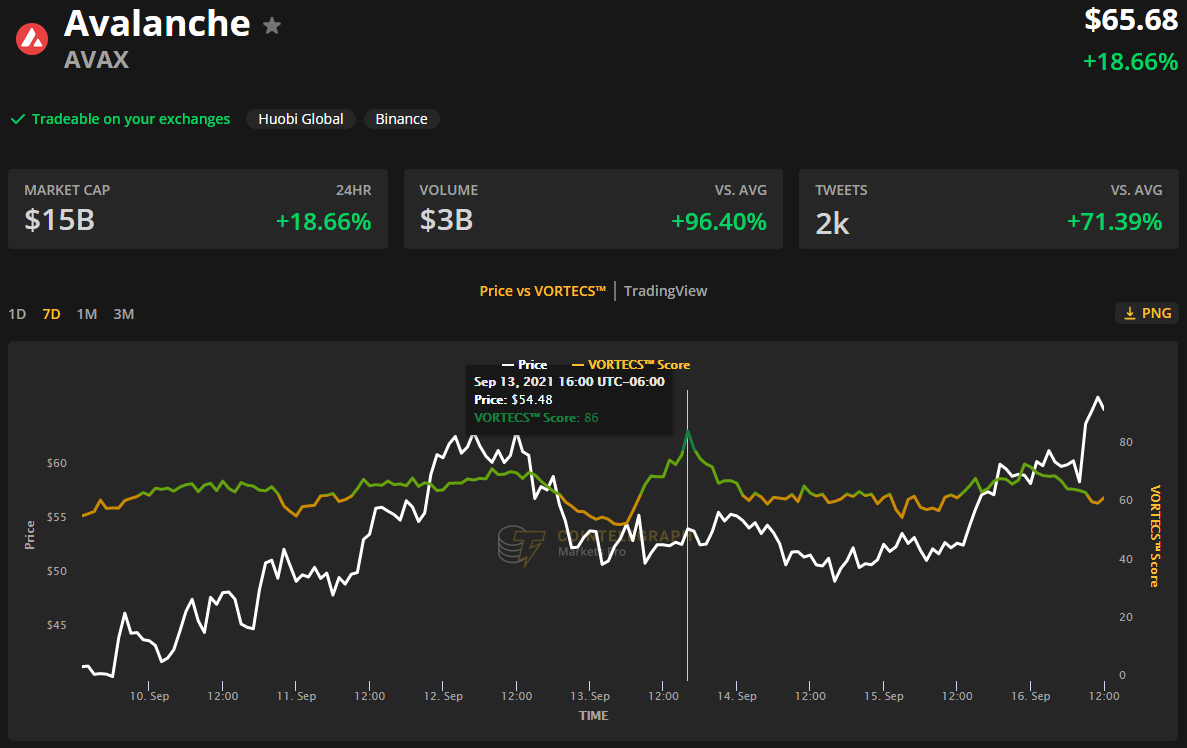 As seen in the chart above, the VORTECS™ Score for AVAX spiked into the green and reached a high of 86 on Monda, around 24 hours before the price increased 40% over the next two days.The views and opinions expressed here are solely those of the author and do not necessarily reflect the views of Cointelegraph.com. Every investment and trading move involves risk, you should conduct your own research when making a decision.