A combination of macro factors and smart action from big players left retail investors holding the bags in both Bitcoin and altcoins, Light explained.This was apparent before the comedown from $69,000 accelerated into December’s liquidation cascade — smart money knew that such levels were unsustainable, and reacted accordingly.”25% of derivatives OI was closed or liquidated. Billions upon billions lost. If people were cautious before, they were now properly risk averse,” the account wrote. After bottoming and since remaining broadly below $50,000, however, there is fresh cause for optimism.Those same early sellers are now beginning to look the other way, while BTC/USD is at solid support and appetite for Bitcoin is returning.”Whereas bulls have been cautious, bears have taken to aggression, pushing perpetuals basis negative on some venues and building OI, while the large players who derisked in the $60K area have reversed course and begun to absorb panic- and short-selling,” Light continued.Despite narratives arguing otherwise, the future for Bitcoin bears, therefore, is likely not nearly as “exciting” as the start of the month.”It’s the bears that will likely turn out to be stoneless soon enough,” Light summarized.

Will altcoins spoil the party?

Putting a potential spoke in the wheel are altcoins, these continuing to see distribution after considerable gains throughout 2021. Related: Happy ‘bearday,’ Bitcoin: It’s been 3 years since BTC bottomed at $3.1KFor the short term, however, Ether (ETH) continues to “carry the market,” Cointelegraph contributor Michaël van de Poppe argued this week.Even here, however, the tide is turning as data shows Bitcoin dominance waning.”Many altcoins are down 80% since their peak high in May. They are also on higher timeframe support levels or approaching those,” Van de Poppe told Twitter followers. 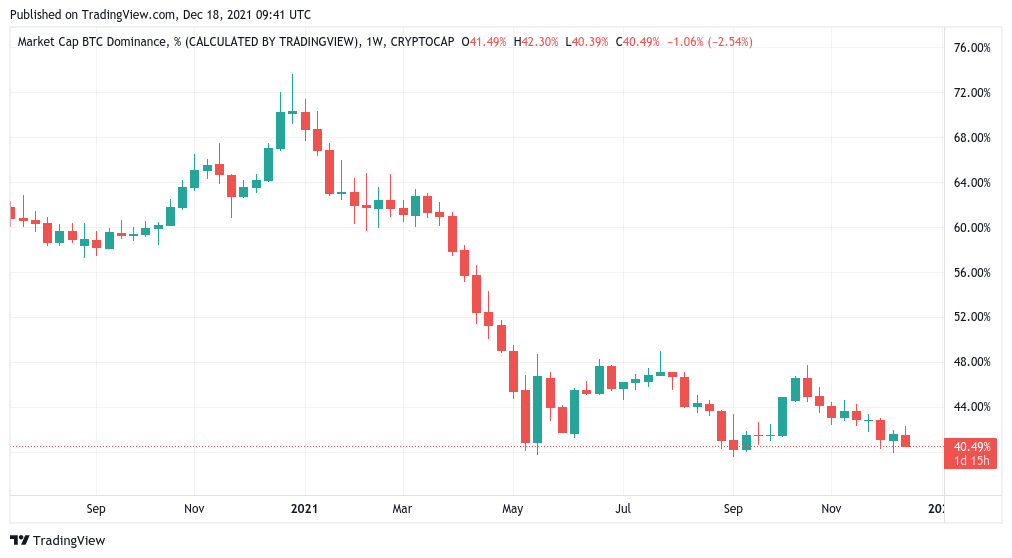 Bitcoin pushes for $50K! Is the downtrend finally over? | Tune in now to The Market Report w/ Sam Bourgi

0.01% of Bitcoin holders control 27% of all circulating coins: Study