According to Bloomberg Intelligence, $100,000 Bitcoin (BTC) and $2,000 gold could greet 2022 as global markets face “deflationary forces.” In a tweet on Dec. 9, Mick McGlone, a senior commodity strategist at Bloomberg’s research arm, forecast that next year would be good for both gold and BTC.

“Positive ramifications” for Bitcoin thanks to deflation

As inflation makes headlines worldwide this month, Bitcoin has faced criticism over its alleged role as a hedge thanks to its 39% drawdown from all-time highs.As Cointelegraph reported, the latest U.S. Consumer Price Index (CPI) data is due Dec. 10, with analysts presuming that inflation will have sharpened 6.7% year-on-year.Next year could be very different, McGlone argues, as inflationary pressures give way to declining commodity prices and equities.“$100,000 Bitcoin, $50 Oil, $2,000 Gold?” he tweeted. 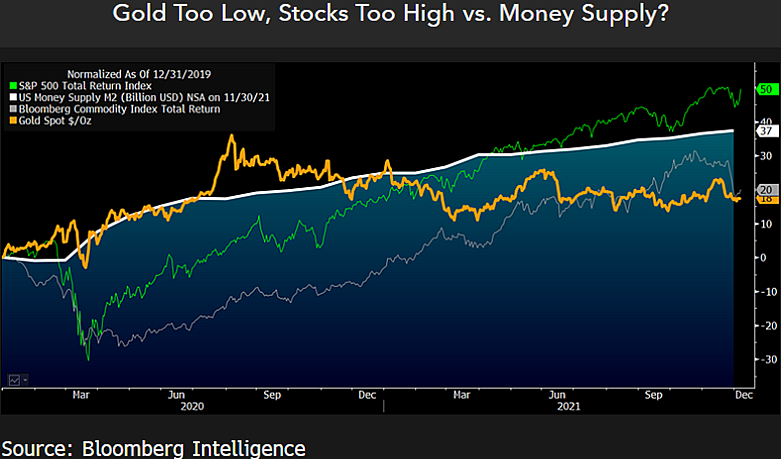 A previous post highlighted crude oil prices now being roughly equivalent to where they were just before the 2008 global financial risis.

McGlone is well known for his bullish views on Bitcoin. Gold, much-maligned this year thanks to its comparatively flat performance versus Bitcoin, may also benefit from macro headwinds.Related: Bitcoin dips below $50K as Evergrande defaults on US dollar debtThe Bitcoin versus gold debate continues to rage, with proponents trading barbs as neither camp sees the kinds of gains they assumed would characterize Q4.On inflation, however, there was consensus to be found.”How long before investors realize that even if the Fed follows through with its inflation-fighting plan to taper QE and raise interest rates slightly in 2022, that it’ll be too little too late to derail this inflation juggernaut?” gold bug Peter Schiff queried this week.