Bitcoin (BTC) inched higher on Saturday as the focus shifted to the Federal Open Market Committee’s (FOMC) policy meeting in the wake of lower inflation numbers last Tuesday.The BTC/USD exchange rate approached $49,000 on the Coinbase exchange, hitting $48,825 before turning lower on interim profit-taking sentiment. Nonetheless, the move uphill raised expectations that the pair would hit $50,000, a psychological resistance target, in the coming sessions.#bitcoin needs to get over $50,000 and just hold it.

The Bitcoin markets received a boost from fears of persistently higher inflation, despite a softer consumer price index (CPI) report released on Sept. 13. Data showed that the United States CPI rose 5.3% year-over-year in August, compared to 5.4% in the previous month. The market received mixed reactions to these numbers, with some cheering that core inflation came out lower than expectations, while others pointing that inflation was still at ridiculously high levels — with 5.3% being one of the highest numbers in more than a decade for CPI.“I like to look at inflation data in a median sense (so rather than having one crazy category drive it all, we look at the center of the distribution, across 82 categories, equally weighted),” said Jens Nordvig, founder and CEO of data analytics firm Exante Data. He added:JUST IN – NY Federal Reserve now sees inflation at 5.2% in one year, 4% in three years; a series high with “large expected price rises” in food, rent, and medical costs.More bullish cues for Bitcoin appeared as TD Securities analysts noted the Federal Reserve might delay the planned tapering of its $120-billion monthly asset-purchase policy after the softer-than-expected inflation report. Additionally, Anthony Pompliano, a partner at Pomp Investments, warned that a sustained 5% inflation would have Americans watch their savings evaporate.“The only way to protect yourself in this environment is to make sure you are invested,” Pompliano wrote in a note to clients.

Dollar goes up in tandem

As it happened, the BTC/USD exchange rate jumped 4.85% on the day of the inflation data release. The pair moved up another 2.17% on Wednesday, with its prices closing above $48,000. Its prices started consolidating sideways in the next two sessions, only to move further toward $49,000 on Saturday.Surprisingly, the U.S. dollar index (DXY) also moved higher like Bitcoin, iterating that macro investors shifted the capital to assets they deemed as their safe-haven following the inflation report. The index, which measures the dollar against a basket of top foreign currencies, surged 0.41% on Friday to 93.246, its highest level in September. 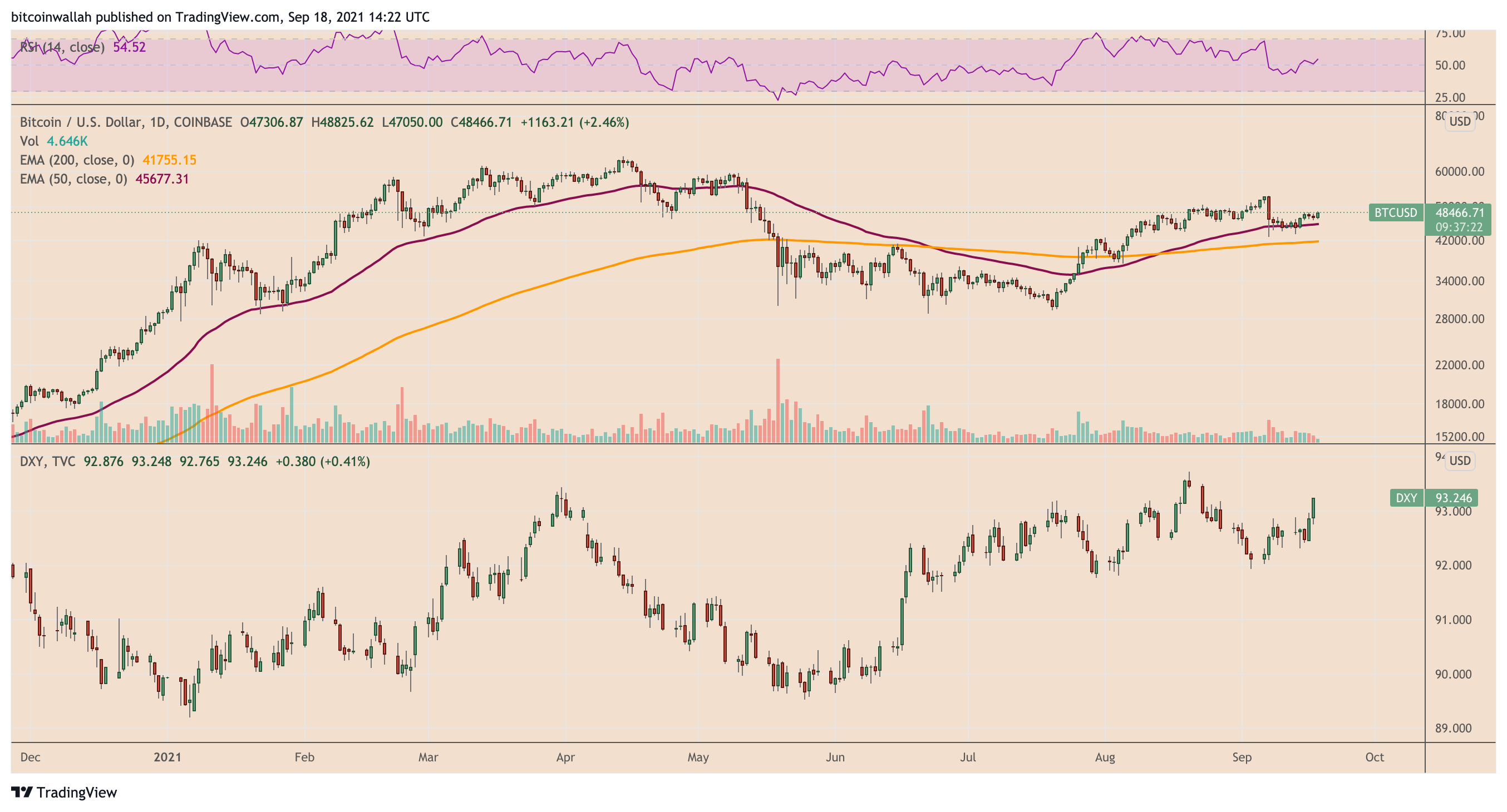 More cues for Bitcoin and the dollar markets should be expected from next week’s FOMC meeting. Related: Bitcoin struggles at $40K after ‘most confusing’ Jerome Powell press conferenceThe Fed officials agree that they would start unwinding their loose monetary policies by the end of this year. But the nonfarm payroll (NFP) report earlier this month showed that the U.S. labor market had not recovered fully.That would prompt the Fed to hold its tapering plans, and any further delay could entail both Bitcoin strength and dollar-weakness.The views and opinions expressed here are solely those of the author and do not necessarily reflect the views of Cointelegraph.com. Every investment and trading move involves risk, you should conduct your own research when making a decision.