Bitcoin price hit another all-time high at $69,000 as Ether continued its long slog toward $5,000 after reaching a new high at $4,868 earlier today. Shortly after hitting this fresh milestone, however, traders began taking profit, leading to a nearly-$7,000 drop which plunged BTC price below $63,000.Interestingly, this morning’s breakout initiated right as a report from the U.S. Bureau of Labor Statistics showed a sharp 6.2% annual rise in the Consumer Price Index, a figure which is the highest in 30 years. According to the BLS, rising energy costs fueled a rise in CPI but for at least 6 months, analysts have tracked the rising costs of food and other goods. The current CPI is the highest it has been since October 1990. Core inflation, a figure that ignores the impact of the rising cost of goods, showed a 4.6% increase, a level not seen since 1991.

Amid rising inflation, the Federal Reserve and the Biden administration continue to message that the situation is “under control” but equities markets reacted negatively to the news. Despite the concerning news and slight pullback in traditional markets, BTC and Ether price rose, a dynamic that analysts like Anthony Pompliano refer to as “assymetric price action” where investors who see a red hot stock market and unsustainable central bank monetary policy making risk-on assets like Bitcoin attractive investments and hedges against gold, the dollar and inflation. According to Cointelegraph business editor, Sam Bourgi, Bitcoin is viewed by many as the best “hard money” alternative to sovereign currencies and: 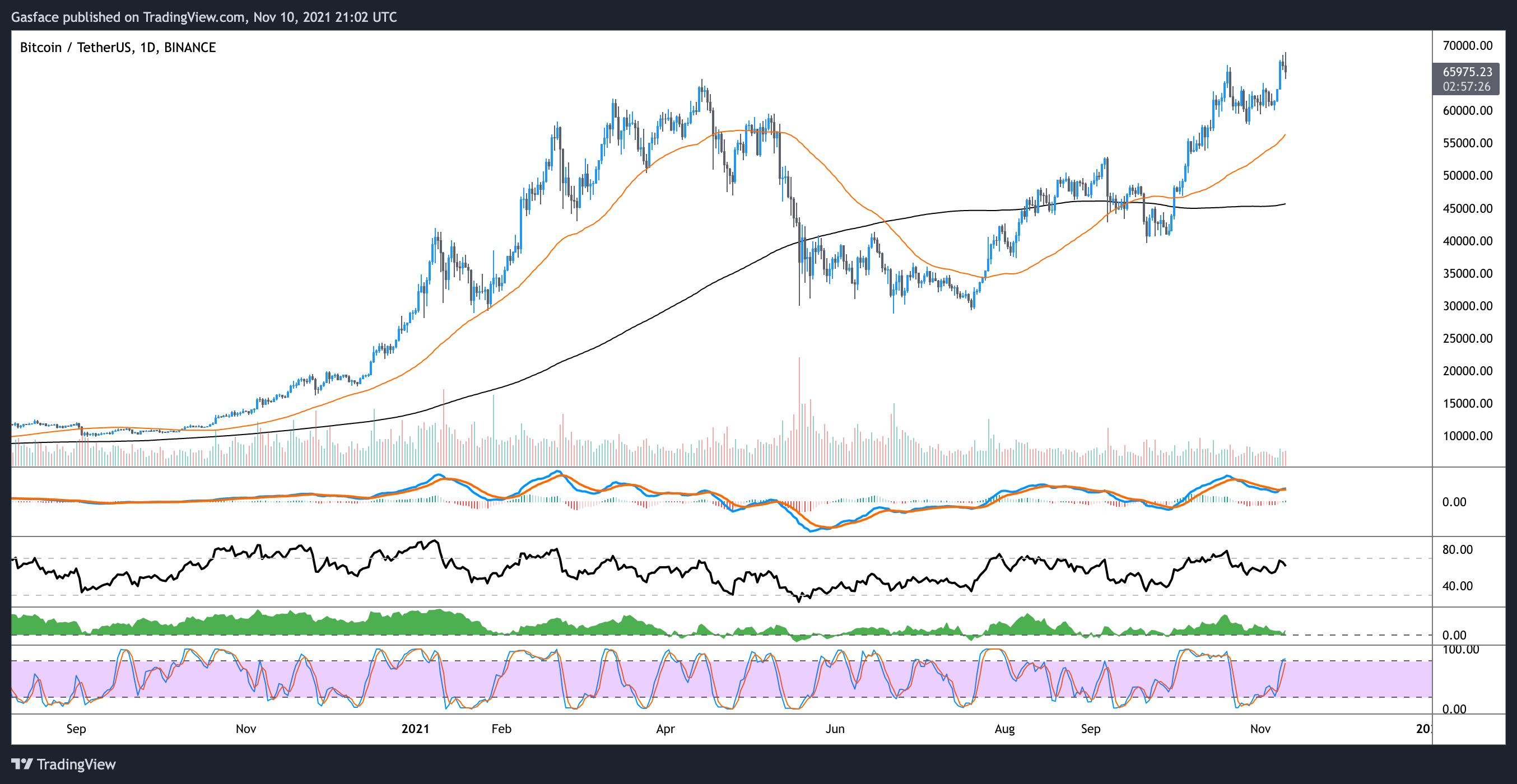 Shortly after achieving these astronomical new heights, Bitcoin’s price fell back towards $62,700, before recovering slightly to around $64,500 and most altcoins endured near double-digit lossesEven though the current downside move is sure to shock some investors, slight corrections after reaching new all-time highs is a customary practice for Bitcoin. From the perspective of technical analysis, profit taking near all-time highs and the need for a retest of lower support levels are normal processes for most cryptocurrencies. In fact, a quick glance over discussions by many analysts and traders on Twitter shows that most expected BTC to revisit lower support levels at $64,000 and below before recapturing bullish momentum and moving higher.The overall cryptocurrency market cap now stands at $2.91 trillion and Bitcoin’s dominance rate is 41.9%.