Bitcoin (BTC) sought cues from the United States Federal Reserve on Dec. 14 as markets waited anxiously for news on policy. 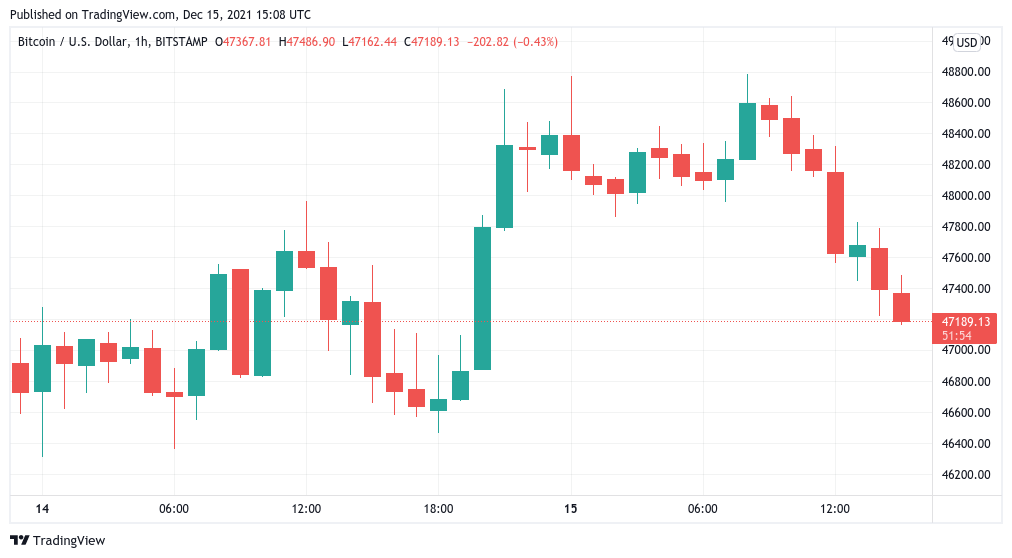 Data from Cointelegraph Markets Pro and TradingView showed BTC/USD continuing in a range around $47,000 as Wall St. opened on Dec. 15.The pair had hit local highs of $48,785 on Bitstamp overnight but was down 3% at the time of writing ahead of a key Fed meeting.The Federal Open Market Committee (FOMC) will begin discussions at 2 pm Eastern Time, with expectations focusing on interest rates, inflation and asset purchase tapering.A hawkish stance is foremost in analysts’ minds, this potentially causing pain for risk asset holders in the short term should the Fed’s approach become less liberal.”Markets are forward-looking. Crypto is even more so because it’s not under anyone’s control. It’s the only free market left in the world,” popular crypto trader Pentoshi summarized in a Twitter discussion on the issue. Traditional markets were similarly directionless, with the S&P 500 down 0.22% on the day.As Cointelegraph reported, with Bitcoin underperforming compared to what many assumed Q4 2021 would look like, a consensus is building that 2022 will form the market cycle peak for both BTC and altcoins.”The panic & bearish sentiment towards BTC is extreme right now. But there’s nothing extreme about this -38% retrace,” fellow trader and analyst Rekt Capital reiterated. Rekt Capital previously noted that a close above $42,300 still represents a higher low formation for BTC/USD.

Fear is all around

On altcoin markets, the mood was more pronounced in its skew to the downside.Related: Bitcoin sheds ‘dumb money’ as retail buys most BTC since March 2020 crashOut of the top ten cryptocurrencies by market cap, all except Solana (SOL) were mildly in the red on daily timeframes.Dogecoin (DOGE), fresh from its Tesla publicity, managed to secure around half of its 25% gains.”Right now, people are easily selling their bags as they are convinced a huge drop will happen tonight,” Cointelegraph contributor Michaël van de Poppe argued.The Crypto Fear & Greed Index stood at 28/100, up from 21/100 on Tuesday, marking a transition from “extreme fear” to “fear” within its own range reflective of Bitcoin’s recent moves.

Crypto in the House: Execs on the march, US partisan politics and Web3