Thursday was a bloodbath for traditional and cryptocurrency markets. On the worst day of trading since 2020, Bitcoin (BTC) dropped over 7%, while the Nasdaq slipped over 5%. Many hoped for capitulation in the trade and crypto markets, and although the short-term outlook for Bitcoin looks weak, one analyst and some evidence would suggest that Bitcoin is still on course to becoming a risk-off asset.Markets are by no means math-based or infallible, but a risk-off asset describes an asset that performs well–or is an asset that investors flock to–when overall market sentiment wanes. Government bonds are risk-off assets. Conversely, tech stocks and cryptocurrencies are considered risk-on assets. Risk-on assets perform well when the overall “mood” in the market is up and when the United States Federal Reserve isn’t hiking interest rates.Nonetheless, one Bloomberg analyst shared an interesting graph describing “adoption, maturation and Bitcoin beating equities,” implying that Bitcoin may finally be showing its colors as a safe harbor during troubled waters.The graph shows that volatility in Bitcoin and the performance of Bitcoin is outcompeting that of the Nasdaq 100 stock index. 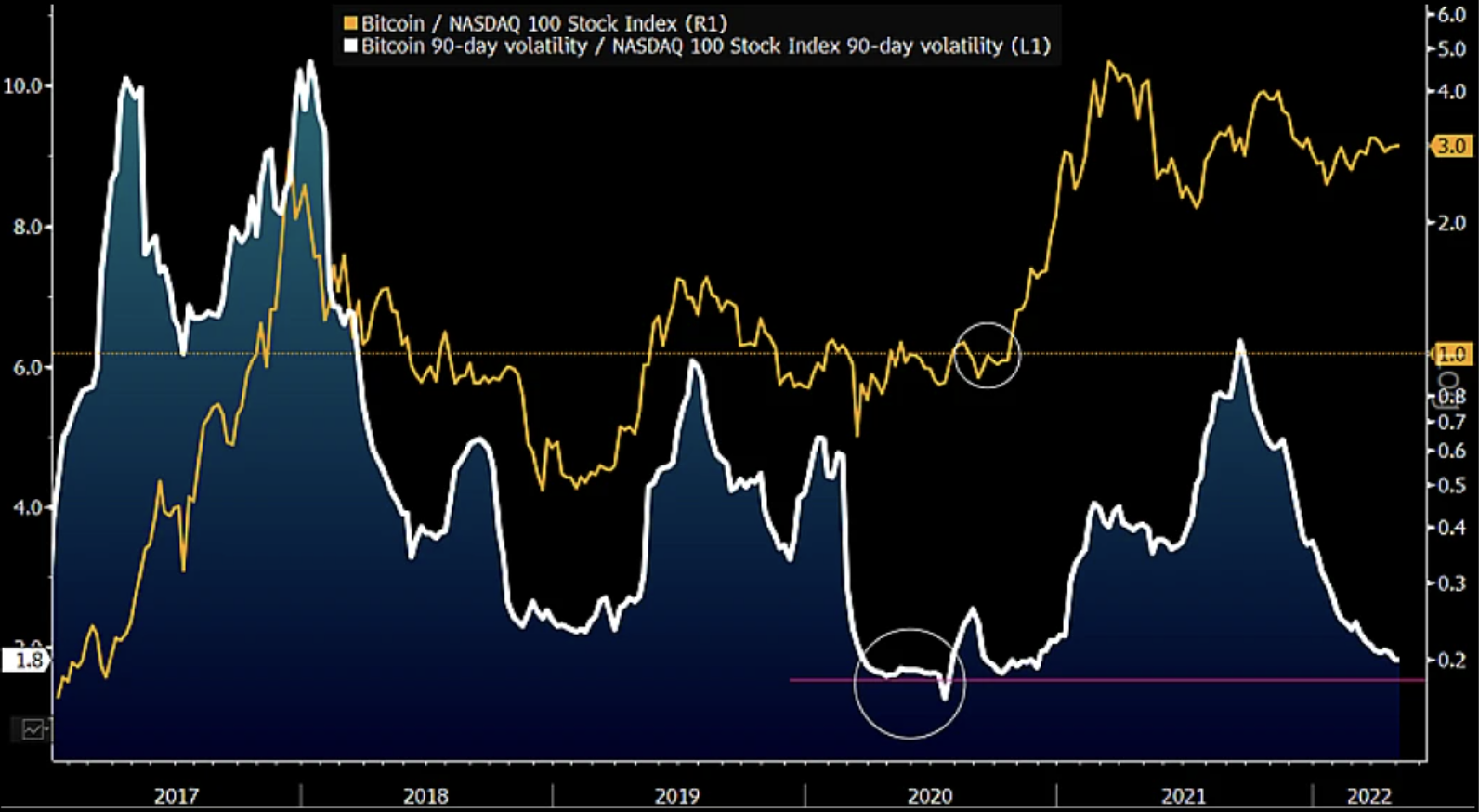 Crucially, Mike McGlone explained that “the crypto market at the start of May appears as a nascent revolution in fintech and money.” “The fact that the world’s most fluid, 24/7 trading vehicle — Bitcoin — was down only about 15% in 2022 to May 3 vs. 20% for the Nasdaq 100 Stock Index may portend the crypto transitioning to a risk-off asset.”Mike McGlone, the author of the report interviewed with Cointelegraph in January this year. McGlone suggested that the transition of Bitcoin to become a risk-off asset “will propel it to $100K in 2022.”Crucially, he described that “what’s happening to advance money and finance into the 21st century is unstoppable.”To back up the argument, according to one chart provided by InvestAnswers YouTube, over the past 90 days, Bitcoin is up 6% vs. the Nasdaq’s 12% lows.

Ultimately, Bitcoin has slowly proved itself as a store of value, or Gold 2.0, as the Winkelvoss twins describe it. However, with the worsening macroeconomic backdrop, popular YouTuber Benjamin Cowen said that Bitcoin may not hit $100,000 this year in the current “risk-off” environment–not “until inflation is under control.”Related: Bitcoin celebrates halfway to the halving with new hash rate recordResultantly, it may still be a tad prescient to call Bitcoin a “risk-off” asset, especially as it wallows in the mid $30,000s. That said, there are a couple of certainties. Do Kwon will continue to buy Bitcoin in the billions, Michael Saylor will continue to orange pill big-name investors and there will only ever be 21 million Bitcoin.

Ready Games will help developers upgrade their games to Web3

UK Treasury and central bank will consult on CBDC, potentially launching by 2030