On Wednesday, the Banque de France (BdF), the BIS Innovation Hub (BISIH) and the Swiss National Bank (SNB) announced the success of a pilot run of a wholesale central bank digital currency (wCBDC), titled Project Jura. The project, which aimed to investigate cross‑border settlement with euro and Swiss franc wCBDCs, was launched on a third‑party distributed ledger technology platform.The experimental technology explored in Project Jura consisted of a decentralized peer‑to‑peer network of computer nodes (Corda) to validate transactions while simultaneously ensuring that all legal, regulatory and business rules of governing nations are satisfied. Then, there was the tokenization of the aforementioned fiat currencies and the Negotiable European Commercial Paper, a short-term maturity (one year or less) debt instrument denominated in euros. Finally, Project Jura looked into infrastructure networks that enable real‑time gross settlement of transactions, bond digitization and a digital assets registry.Although the trial was successful, it does not guarantee the issuance of a wCBDC by Swiss, French or European Union authorities. The report concluded that “wCBDCs could be incorporated into novel settlement arrangements that could change the structure and functioning of capital markets, money markets and foreign exchange markets,” saying that: 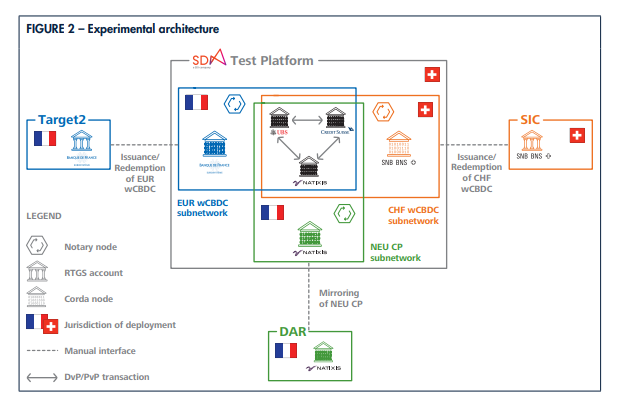 Chinese regulators unite forces to crack down on crypto