As September ended, the cryptocurrency markets recovered from the so-called “September curse” handsomely to hit a market capitalization of $2.32 trillion. The decentralized finance (DeFi) market has been an integral part of this growth. The total value locked (TVL) in DeFi protocols grew more than 20%, from $113.5 billion on Sept. 28 to hit $137 billion on Oct. 6, as per data from Dappradar.Even the Bank of America (BoA) — a global banking giant — has revealed its bullish outlook on DeFi and nonfungible tokens (NFTs). In an Oct. 4 report by BofA Securities — a subsidiary of BoA — the firm evaluated the scope of crypto assets beyond “just bitcoin.”(Bitcoin’s strength) can execute automated programs (smart“Tokens such as Ether, Cardano, Solana, and others with blockchains that can do more than securely record payments contracts) such as making a payment after an event. his is Decentralized Finance (DeFi) where smart contracts automate manual processes of traditional finance”, the report states.It also compared tokenization to the early days of the internet and spoke of the decentralization and tokenization of many aspects of finance as it currently exists. Cointelegraph discussed the rapid expansion of the DeFi markets with Johnny Lyu, the CEO of crypto exchange KuCoin. He explained:While the DeFi sector’s TVL has seen a bump from the massive price increase of various projects’ native tokens, Lyu also attributes the growth to the attractive rates offered by DeFi platforms.A recent report by Dappradar revealed that the TVL in the industry gained 53.45% quarter-on-quarter in Q3 2021. In September, the unique active wallets (UAW) linked to any decentralized application hit a daily average of 1.7 million. The quarterly average UAW is 1.54 million.Cointelegraph spoke with Balancer Labs CEO Fernando Martinelli about the importance of the DeFi base that Ethereum established. He said, “A new wave of DeFi projects is building on top of the infrastructure the first generation has established, bringing new use cases and more advanced products to DeFi power users.”Martinelli said that greater institutional involvement is driving up the TVLs in well-established “safe” protocols. Furthermore, the large yields offered by DeFi platforms are shifting retail investors from centralized platforms into the DeFi space. This rising adoption across various categories of investors is enabling DeFi to move to the next phase of its growth.

The DeFi ecosystem began on the Ethereum blockchain because of the smart contract functionality it offered. However, several other blockchain networks have since deployed smart contract functionality on their networks through layer-1 or layer-2 solutions. The most prominent of these networks are Binance Smart Chain, Solana, Avalanche, Terra and Polygon. Most recently, the Cardano network witnessed smart contract deployment as a part of the Alonzo hard fork.Even though the growth of these networks could be seen perceived to be organic, there is one major issue with the Ethereum blockchain that could have contributed to this growth: gas fees. The EIP-1559 proposal that came as part of the London hard fork included the burning of ETH tokens in an attempt to make ETH “ultrasound money” eventually, improve scalability and reduce gas fees.However, even though the fees are not as absurd as they used to be during the peak of the bull run in May, there have been a few instances in the last several weeks where the average transaction fee in the Ethereum network took a huge spike. Notably, on Sept. 7, the fee went to $21.29, and on Sept. 27 the gas price went to a four-month high of $25.43. 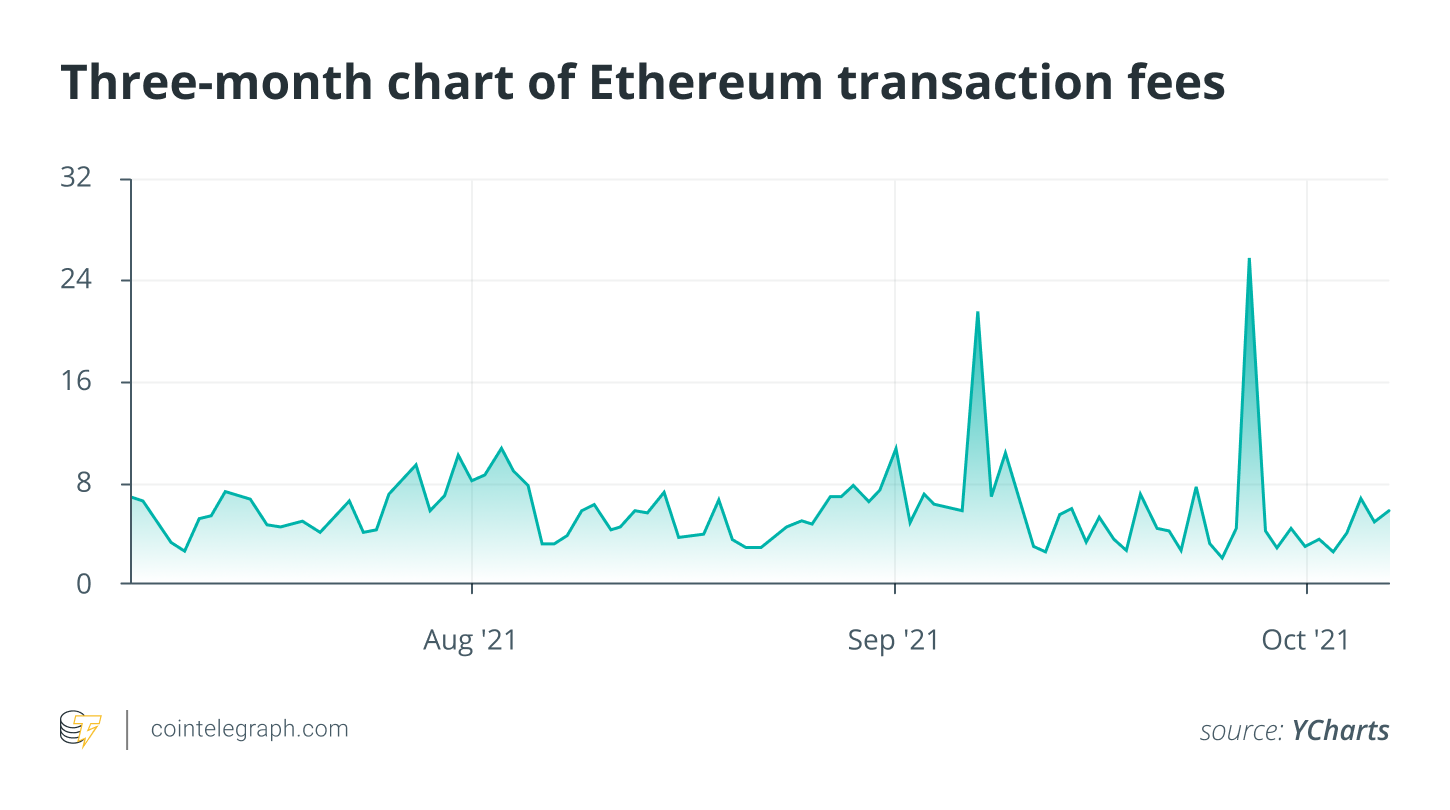 Martinelli said, “There is little doubt that high gas fees on Ethereum — particularly severe recently due to the congestion from NFTs — has helped spur on the rapid adoption of other networks. (..) Layer 2 solutions are helping Ethereum scale, and we’re excited to see ongoing developments in this space.”The continued popularity of NFTs is also a significant driver of this growth. The aforementioned report by Dappradar mentioned that the NFT space has seen exponential growth as well. In Q3, the market generated over $10.67 billion in trading volumes, thus entailing a 704% increase from the second quarter and a massive 38,060% increase year-on-year. While earlier in the year, most of the major NFT sales were on the Ethereum blockchain, now blockchains like Binance Smart Chain, Solana, Polygon, Avalanche and Tezos are beginning to catch up. Recently, an NFT from the biggest collection in the Solana ecosystem, Solana Monkey Business, sold for 13,027 Solana (SOL), currently worth more than $2.1 million, breaking the platform’s previous NFT record.Shane Molidor, the global head of business development at crypto trading platform AscendEX, spoke with Cointelegraph about the potential of NFTs:

The rapid expansion of the DeFi ecosystem is not without its setbacks. Due to a combination of lack of understanding and scrupulous players, there have been several exploits and hacks throughout the growth phase.On Sep. 30, DeFi interest rate protocol Compound Finance announced that there was a token distribution bug in its newly implemented Proposal 062. This flaw accidentally rewarded users with $70 million in COMP tokens. In the aftermath, another $65 million COMP tokens are at risk as the update in the code wouldn’t take effect for the next three days due to a time-lock. In total, the bug put $162 million “up for grabs,” making it an extremely costly mistake. On Oct. 7, the protocol passed a proposal to fix this issue.Related: Compound crisis averted? Securing exposed COMP could be just the startIn another instance of a technical error, the cryptocurrency exchange Bittfinex paid a transaction fee of over $23 million to transfer $100,000 of Tether (USDT) on the Ethereum blockchain to a layer-2 subsidiary platform, DiversiFi. However, the goodwill of the miner prevailed as he returned the funds to the exchange.Despite the lucrative nature of the DeFi markets, such widely covered instances of hacks, bugs and mistakes could serve as deterrents for institutional investors and retail investors alike. Retail investors are even more susceptible to such events of financial loss due to the lack of sophistication and knowledge that institutional investors possess. Thus, they often serve as a benchmark for retail investors. Molidor told Cointelegraph:But these negative instances are only a small part of the picture evolving in the DeFi market, which is attempting to revolutionize finance. The user’s independence and the innovation that DeFi protocols offer to investors will only serve to further grow the space.

You can buy a Tesla with Bitcoin again, this time via Car For Coin