Early adopters in the cryptocurrency market have once again been rewarded for their bravery and exploration after the popular Ethereum Name Service protocol, which issues nonfungible tokens that double as Ethereum addresses and web domains, distributed an airdrop for its new ENS decentralized autonomous organization (DAO) token. The resulting airdrop translated to an instant five-figure payday for many holders and there are those who would have registered multiple ENS addresses to multiple wallets, meaning some holders are in possession of a six-figure airdrop. It had been widely expected that an airdrop was in the works for members of the ENS community, especially because the tactic has become more common throughout 2021 and was made popular when Uniswap, a decentralized exchange, surprised users with a retroactive airdrop late in 2020. ENS distributed 25 million tokens to domain holders and currently, the token is trading for $85 on a number of cryptocurrency exchanges.

The claims process for ENS tokens began at 7 pm on Monday, Nov. 8, and qualified domain holders have until May 4, 2022 to claim their allotted tokens. The number of tokens each qualified user receives is based on a calculation that takes into account how long an address has held a domain as well as the length of the domain registration, with a cut-off of eight years. Lower level tiers have received an average of 200 ENS tokens, while the mid-level tier has received 500 ENS and the most active participants have earned 1,000 ENS. Claiming tokens also requires active participation from the domain holder, who has to vote on four articles of the ENS governance constitution designed to get the new decentralized autonomous organization off to a solid start. Users must also delegate their token voting power before getting access to their tokens and Coinbase has emerged as one of the top delegates in early voting. 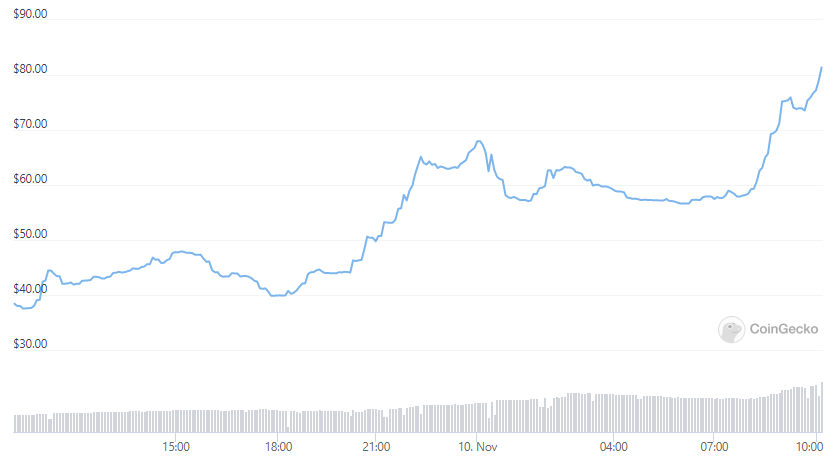 According to data from Dune Analytics, there are 137,689 addresses that are eligible to claim the airdrop, of which 62,634 have already completed the process and claimed 49.72% of the available supply.

This airdrop from ENS marks one of the largest token drops of the year, behind the dYdX airdrop, which gifted the most active users of the decentralized derivatives exchange with a high six-figure payday as the token’s value surged following its release. The views and opinions expressed here are solely those of the author and do not necessarily reflect the views of Cointelegraph.com. Every investment and trading move involves risk, you should conduct your own research when making a decision.