Ethereum’s native token, Ether (ETH), staged a rebound on Sept. 26 following a massive decline earlier this week that saw its prices plunging to as low as $2,651 on Coinbase.The ETH/USD exchange rate rose 3.63% to hit an intraday high of $3,030. The upside move amounted to a 14.3% upside retracement from the pair’s week-to-date low at $2,651, showing that traders attempted to retain their bullish bias despite potential headwinds ahead.Last week, ETH prices fell due to a flurry of issues arising from China. On Monday, traders dumped crypto assets en masse after a tumult in China’s heavily indebted property market prompted a sell-off across global stock markets.A rebound move ensued later in the week but met with another sell-off on Friday after the People’s Bank of China reiterated that crypto transactions are illegal. Nonetheless, Ether bulls maintained their foothold and pushed prices back above $3,000, a psychological resistance level. 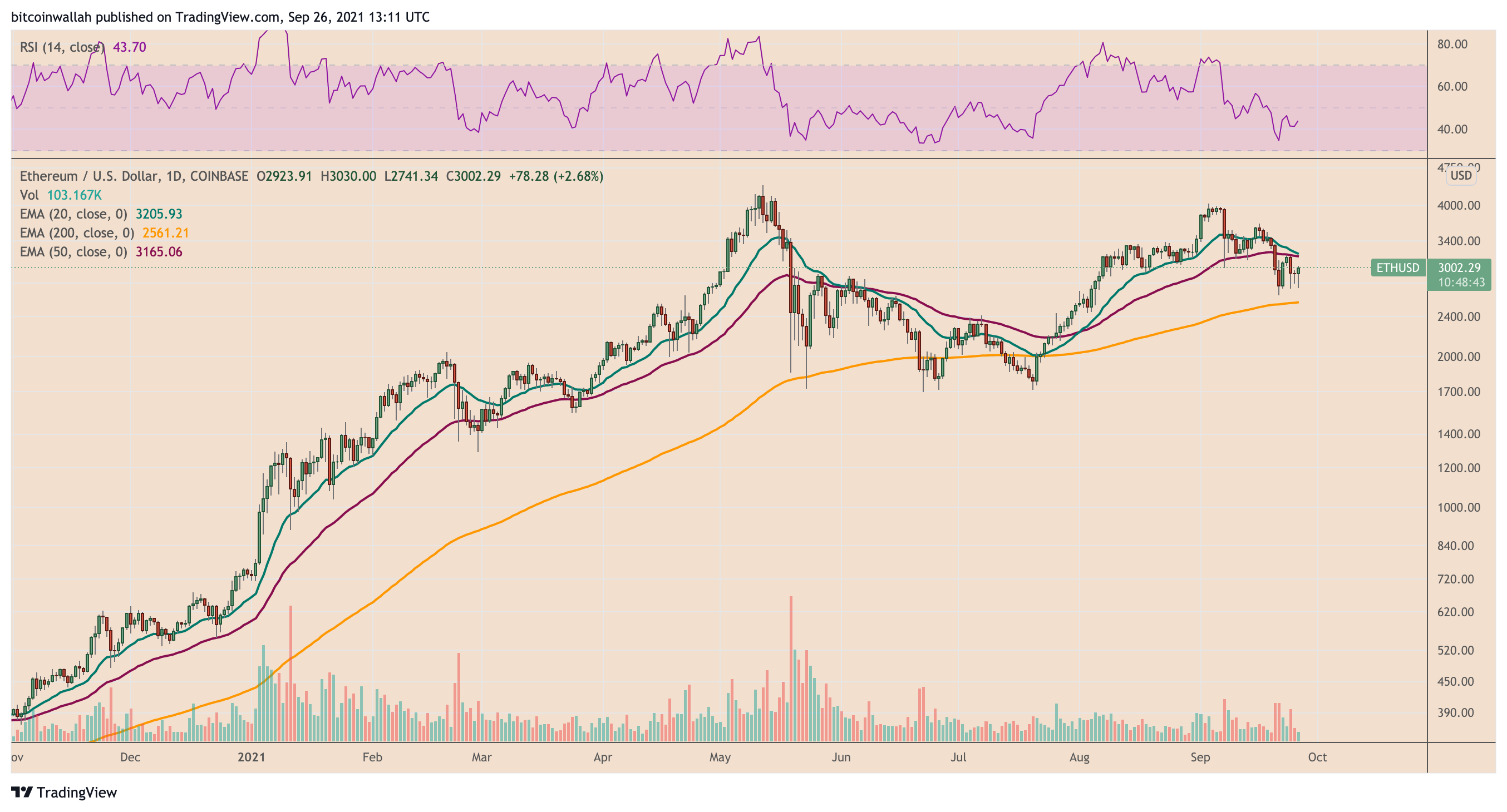 The sentiments were similar across some top crypto assets, with the benchmark cryptocurrency, Bitcoin (BTC), hitting an intraday high of $43,767 on Coinbase following a 2.49% upside move. Meanwhile, Uniswap’s native asset, UNI, also fared higher by more than 19%, becoming the top-performing crypto asset in the previous 24 hours.At the same time, Ether’s top rivals Cardano (ADA) and Solana (SOL) performed poorly, with ADA/USD dropping more than 5% and SOL/USD losing over 3% on a 24-hour adjusted timeframe.

Ether gains also followed a bullish report from JPMorgan Chase. The study noted that institutional investors have started increasing their exposure in Ether markets.Analysts at JPMorgan credited the ongoing craze in the decentralized finance (DeFi) and nonfungible token (NFT) sector as the primary driver behind investors’ interest in Ether. They added that the 21-day average Ethereum Futures premium climbed to 1% over spot ETH prices, citing the Chicago Mercantile Exchange data recorded since August.

The JPMorgan report coincided with a record amount of Ether tokens getting withdrawn out of all crypto exchanges, as per data provided by CryptoQuant. At press time, the net ETH reserves on trading platforms had dropped to 18.44 million ETH compared to 23.94 million ETH a year ago.Related: Ethereum drops more than Bitcoin as China escalates crypto ban, ETH/BTC at 3-week lowIndependent analyst PostyXBT also anticipates a potential further price rebound in Ether markets, noting that the cryptocurrency’s latest declines had pushed it inside a classic accumulation range, as shown in the chart below. 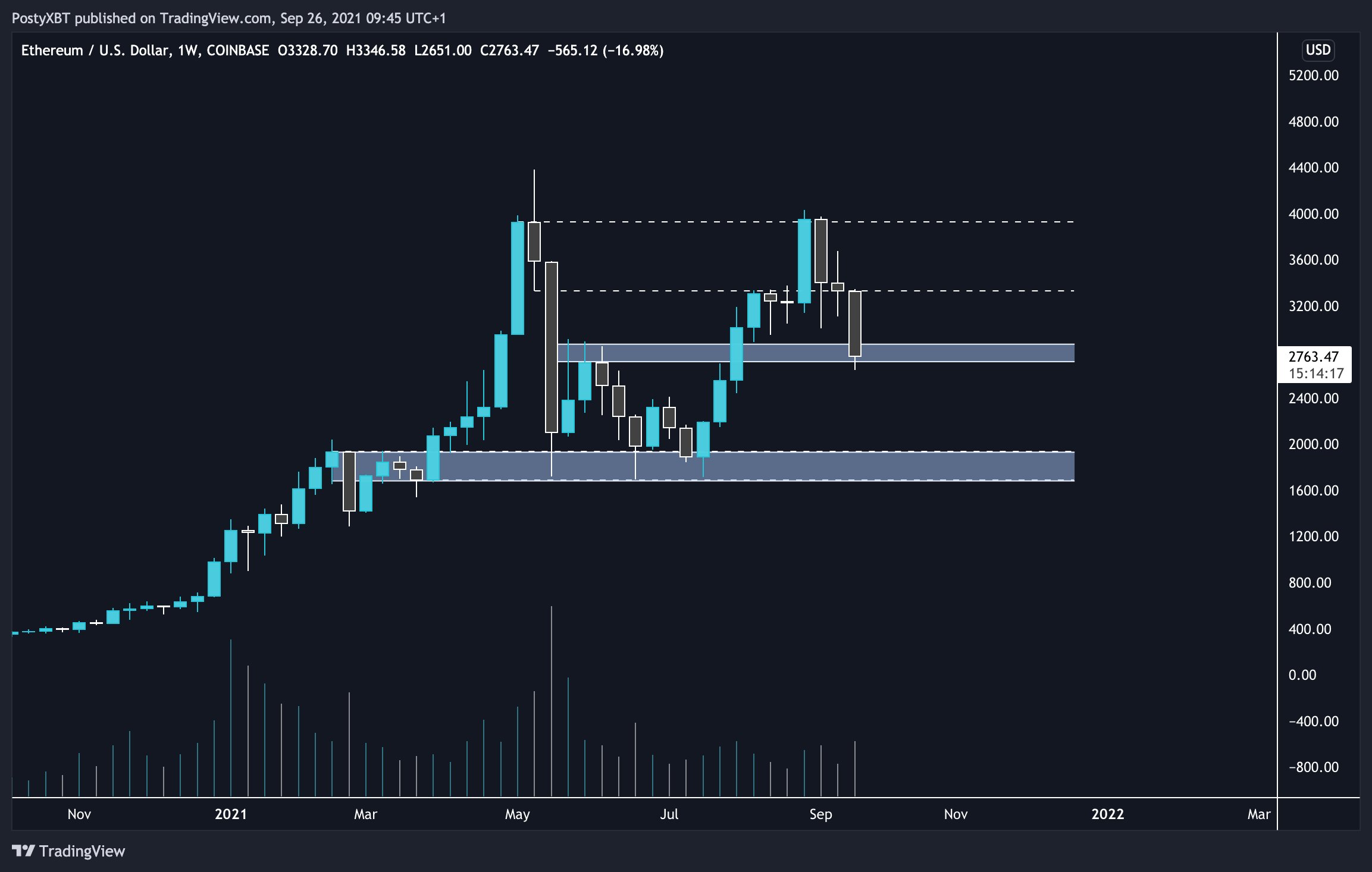 “Weekly close equally as important for ETH today as price tests the previous range highs as support,” the analyst noted. The views and opinions expressed here are solely those of the author and do not necessarily reflect the views of Cointelegraph.com. Every investment and trading move involves risk, you should conduct your own research when making a decision.