Senator Elizabeth Warren publicly scrutinized the decentralized finance sector this week in a hearing with the Senate Banking Committee.Speaking on the topic of “Stablecoins: How Do They Work, How Are They Used, and What Are Their Risks,” Warren conversed with Alexis Goldstein, a regulatory expert on financial matters, on the intricacies of stablecoin transactions, including Tether (USDT) and USD Coin (USDC) and whether the former has genuine one-to-one dollar backing.Following this, the former Democratic presidential candidate questioned Hilary Allen, a professor at the American University Washington College of Law, on whether a run on stablecoins could potentially endanger the country’s financial system.In response, Allen argued that stablecoins runs, in which speculators of the asset sell on mass, would be akin to that witnessed in money market mutual funds and foreign exchange markets and, therefore, could have wide-ranging consequences for the DeFi ecosystem.In closing, Warren stated, “DeFi is the most dangerous part of the crypto world,” adding:Warren’s track record in commenting on the cryptocurrency space follows a consistently predictable pattern that largely insinuates illicit activity within the market, alongside advocacy for robust consumer security in light of sparse regulation.In June this year, she spoke dramatically about the emergence of central bank digital currencies (CBDC), stating that cryptocurrencies have “created opportunities to scam investors, assist criminals and worsen the climate crisis” and that a positive solution could be a centralized, federally-backed U.S. digital dollar.Around the same time as the hearing, Warren became embroiled in an argument with tech titan Elon Musk, accusing the maverick CEO of “freeloading” off the general public after reports emerged about tax contributions among the country’s top earners. Verbal insults were exchanged back and forth between the pair on various mediums, including Twitter.Please don’t call the manager on me, Senator Karen

An Ethereum Beacon Chain staking contract containing 8,641,954 Ether (ETH), equivalent to $33.5 billion, was discovered to be inaccessible this week without the action of a hard fork, an event in which the details have yet to be finalized. The Beacon Chain is the inaugural development in Ethereum’s transition to a proof-of-stake mining consensus. One of the prerequisites for becoming a validator on Ethereum 2.0 is to stake at least 32 ETH in the contract. Therefore, a short-term situation has arisen whereby vast sums of capital are stored in a contract that cannot be spent or transferred out. Once the merger of the Beacon Chain into the Ethereum mainnet is finalized, the transition to Eth2 will be complete. Following this, the hard fork details are expected to be drawn up, creating a solution to what is currently a dormant contract.

New study finds that 83% of Millennial millionaires own crypto

A survey reported by U.S. news broadcaster CNBC has revealed fascinating insights into the financial portfolios of Millennial millionaires, concluding that a large majority of individuals have invested in the nascent cryptocurrency markets and are expecting to continue doing so for the foreseeable future.Conducted by Spectrem Group, the survey polled investors with assets in excess of $1 million and found that 83% of them had made crypto investments in their lifetime and that 53% of respondents hold 50% or more of their portfolio in the digital asset market.George Walper, president of Spectrem Group, noted that traditional organizations have largely failed to recognize the interest from Millennials in the digital economy, stating:

Analytical data reveals that DeFi’s total value locked has decreased 13.51% across the week to a figure of $122.89 billion.Data from Cointelegraph Markets Pro and TradingView reveals DeFi’s top 100 tokens by market capitalization are mostly bearish across the last seven days. 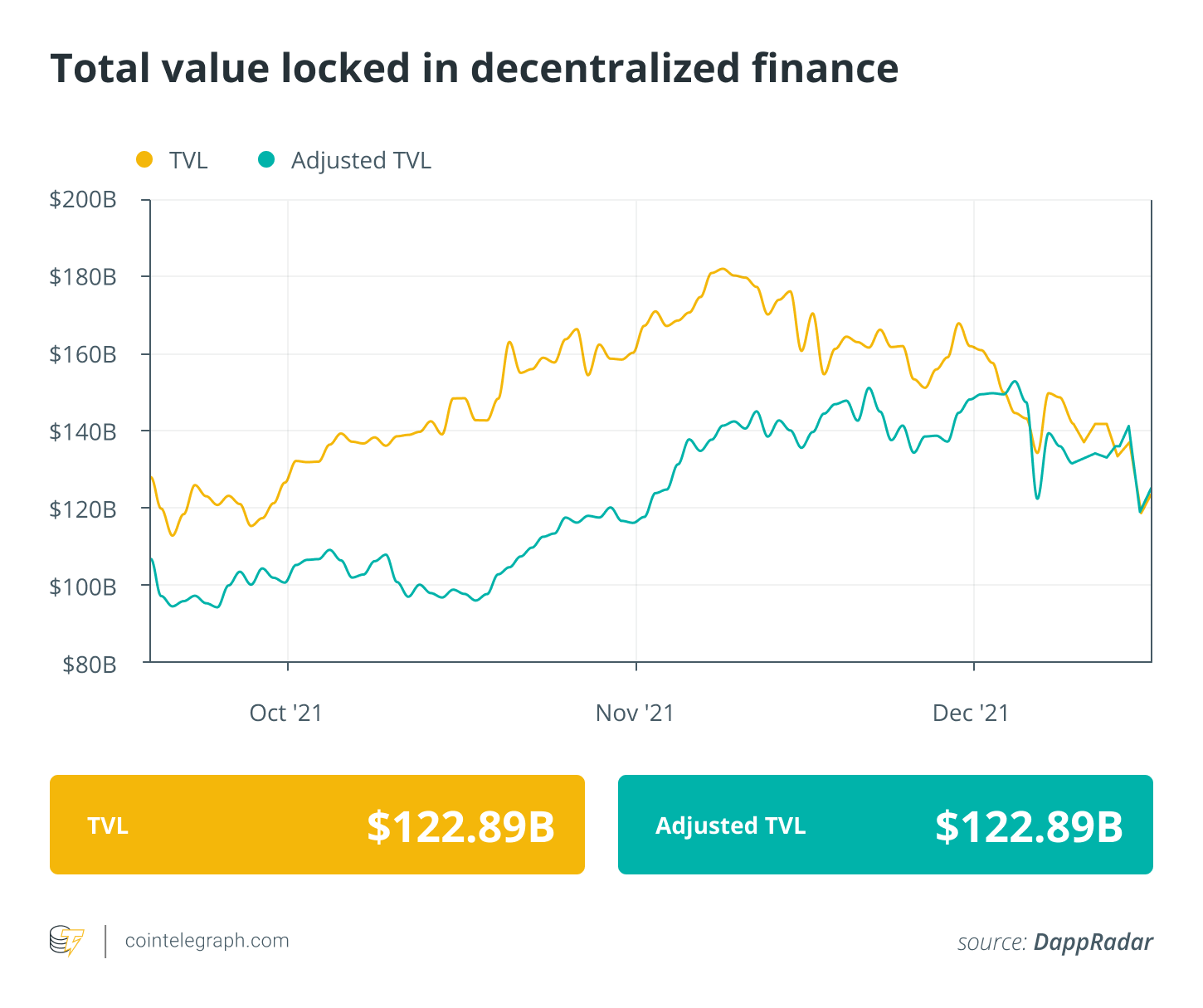 Yearn.finance (YFI) grew a healthy 33.56%. Avalanche (AVAX) rose 22.03%, while Curve DAO Token (CRV) posted gains of 11%. PancakeSwap (CAKE) and Oasis Network (ROSE) claimed fourth and fifth places this week with 8.48% and 5.6%, respectively.Interviews, features and other cool stuffThanks for reading our summary of this week’s most impactful DeFi developments. Join us again next Friday for more stories, insights and education in this dynamically advancing space.