Welcome to the latest edition of Cointelegraph’s decentralized finance newsletter.For many years, Ethereum and XRP held the second and third-ranking spots in the crypto market. Read on to discover how wXRP will integrate into Ethereum to expand its utility to smart contracts.What you’re about to read is the smaller version of this newsletter. For the full breakdown of DeFi’s developments over the last week, subscribe to our newsletter below.

The Avalanche Foundation unveiled a new $200 million fund this week aimed at expanding the liquidity potential of startup projects with its ecosystem building decentralized finance, nonfungible tokens, enterprise and cultural applications.According to the official blog post, the smart contracts platform will deploy the funds across a panoply of sectors, including “equity investments, token purchases, various forms of technology, business development and ecosystem integration support,” all of which will be overseen by an expert field of fund managers.The fund, known as “Blizzard,” has been contributed to by an impressive list of participants from the DeFi space, including Ava Labs, Polychain Capital, Three Arrows Capital, Dragonfly Capital and CMS Holdings, among others. Emin Gün Sirer, director of the Avalanche Foundation, shared his perspective on the recent growth of the project, as well as the potential implications for Blizzard:

wXRP to launch on Ethereum blockchain

Wrapped XRP (wXRP) is expected to launch on the Ethereum blockchain in December, facilitated by multichain platform Wrapped.com. The integration will enable Ripple (XRP) holders to deploy smart contract functionalities of lending, borrowing and swapping for the first time in its history.Wrapped tokens are digital assets stored in a vault on a separate blockchain and equally pegged to the value of another asset. For instance, Wrapped Bitcoin (wBTC) operates on the Ethereum blockchain. Therefore, wXRP will have a one-to-one exchange ratio to XRP, with the custody provided by insured provider Hex Trust.In a tweet on Monday, Ripple chief technology officer David Schwartz advocated for a multichain, interoperable approach in the crypto space:Wrapped XRP is coming to Ethereum! Great news for those that want to access XRP within Ethereum wallets, DeFi, and smart contracts.

It’s a multichain after all. https://t.co/36shyqF0Nj

Blockchain firm AllianceBlock announced a partnership with Flare Network this week to advance the capabilities and interoperability of the two platforms within the DeFi space. The long-awaited launch of Flare Network, and its corresponding FXRP token airdrop, is expected to bring Turing-tested smart contracts functionality to the Ripple network by integrating the Ethereum Virtual Machine.Commencing with XRP — due to its partnership connection to Ripple — the platform will also offer Dogecoin (DOGE), Bitcoin (BTC), Algorand (ALGO) and Stellar Lumens (XLM) before reportedly branching out to all native layer-one blockchains.Rachid Ajaja, co-founder and CEO of AllianceBlock, spoke to Cointelegraph about the regulatory potential of the platform:

Analytical data reveals that DeFi’s total value locked has increased 4.62% across the week to a figure of $167.42 billion. 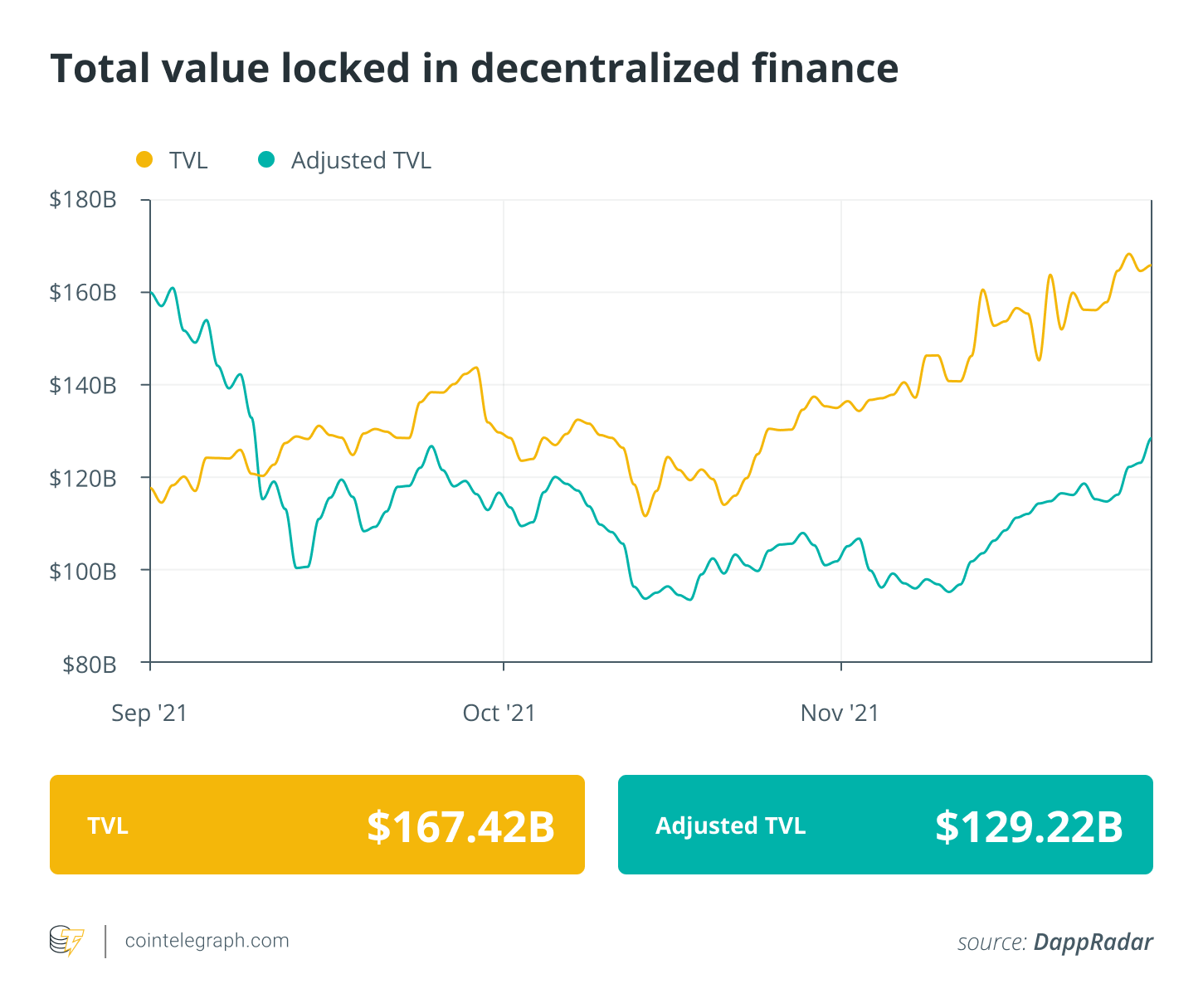 Data from Cointelegraph Markets Pro and TradingView shows DeFi’s top 100 tokens by market capitalization considerably well across the last seven days.Phoenix Global (PHB) secured the podium’s top spot with a colossal 3,230%. Loopring (LRC) came in second with 118.5%, while Basic Attention Token (BAT) came third with 30.94. Fourth and fifth places were claimed by Avalanche (AVAX) and Maker (MKR) with 20.74% and 18.5%, respectively.Analysis and hot topics from the last week:Thanks for reading our summary of this week’s most impactful DeFi developments. Join us again next Friday for more stories, insights and education in this dynamically advancing space.