Welcome to the latest edition of Cointelegraph’s decentralized finance (DeFi) newsletter.Ethereum Name Service announced a retroactive token airdrop this week to a fanfare of crypto enthusiasts. If you happen to own a .eth domain, read on to discover how you can claim your eligible tokens.What you’re about to read is the smaller version of this newsletter. For the full breakdown of DeFi’s developments over the last week, subscribe below.

“The DAO space has matured,” says ENS’ director of operations

Domain protocol Ethereum Name Service distributed its native ENS governance token this week in an airdrop event to early adopters of the protocol and announced the formation of a decentralized autonomous organization, or DAO.Users who registered Ethereum addresses, such as Cointelegraph.eth, were granted a sum of ENS tokens dependent on the date of domain registration and length of renewal fees, in addition to other engagement parameters. The claiming window for tokens lasts until May 4, 2022 to allow the maximum opportunity for applicable claimants. All details on claiming can be read here.In the days following the announcement, major cryptocurrency exchanges Binance, KuCoin, Uniswap and SushiSwap, among others, started accepting the token on their platforms for an array of trading activities. The ENS token has experienced major volatility since launching as a flurry of investors seek to secure their unrealized profits. The asset reached an all-time high price of $85.70 but has since fallen to $54.19 at the time of writing. Cointelegraph spoke to Brantly Millegan, director of operations at Ethereum Name Service, for an exclusive insight into the protocol’s privacy details:DAOs promote a decentralized, open-source model of governance that is owned and managed by the active individuals within the community, rather than a handful of signatories. Projects emerging within the nonfungible token, or NFT, space are adopting the model to encourage their holders to stake assets in a bid to increase the floor price of their collection.

United States Securities and Exchange Commission Commissioner Caroline Crenshaw published an opinion piece this week outlining the “panoply of opportunities” in the DeFi space, alongside expressing a level of caution regarding the lack of regulatory clarity and foreshadowing the challenges that DeFi is expected to pose. Titled “DeFi Risks, Regulations, and Opportunities” and published in the debut edition of The International Journal of Blockchain Law, the piece argues that investors in the digital asset industry require greater legislative protection akin to traditional markets, a sentiment echoed in Crenshaw’s speech at the “SEC Speaks” conference in October.Despite being a core pillar of decentralization since the inception of Bitcoin (BTC) in 2009, Crenshaw also argues that participants in the DeFi space tend to prioritize financial gains over pseudonymity:She continues on to suggest that projects that adhere to the SEC’s regulatory framework can expect a higher probability of success going forward.

DeFi protocol Moonbeam is in pole position to claim victory in Polkadot’s inaugural 10-project parachain auction. The bidding, which commenced on Nov. 11 and is scheduled to run until Nov. 18, has attracted approximately 75,000 participants, who have staked over $2.5 billion in DOT tokens. Polkadot parachains are distinctive layer-one blockchain networks operating in parallel to the main network, in addition to being connected to the Polkadot Relay Chain. They can be implemented across a number of sectors from decentralized finance to smart contracts.Earlier this week, Acala was leading the way in the auction but has since been overtaken by Moonbeam in what has become a two-horse race. The two protocols have accumulated 20.3 million DOT and 17.2 million DOT, respectively — equivalent to a colossal $980 million and $797 million.Polkadot’s first parachain has been added

Referendum 41 has passed registering the Shell parachain on Polkadot, to ensure block production, inclusion, and finalization. The Shell parachain has extremely limited functionality: it does not even have the notion of accounts.In early October, Polkadot council members passed a governance proposal in a unanimous decision, following confirmation from Polkadot founders Gavin Wood and Robert Habermeier that the network could support such initiatives.

Analytical data reveals that DeFi’s total value locked has increased 3.85% across the week to a figure of $174.76 billion. 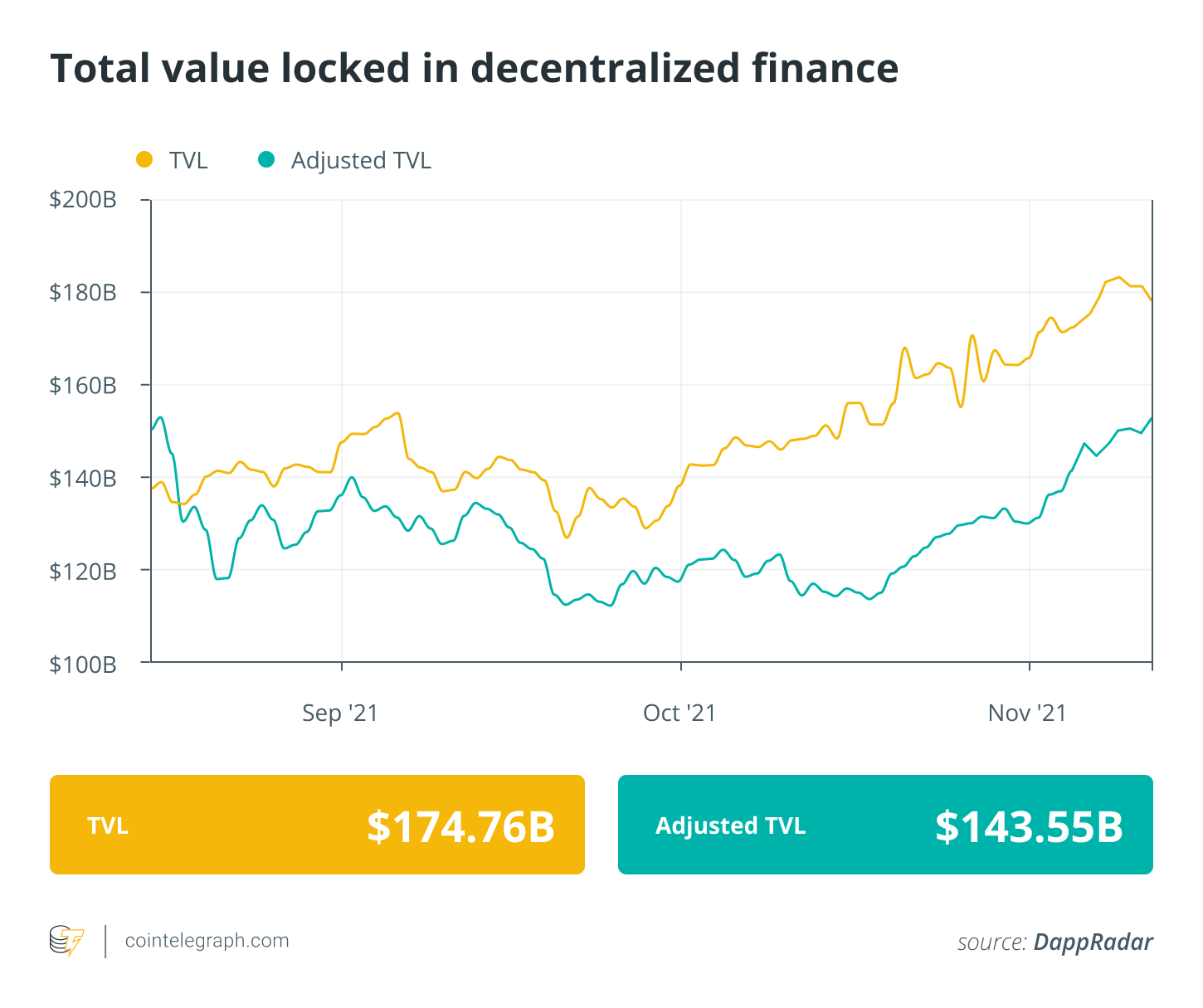 Data from Cointelegraph Markets Pro and TradingView shows DeFi’s top 100 tokens by market capitalization performing considerably well across the last seven days.Loopring’s LRC secured the podium’s top spot with a seismic 179%. Basic Attention Token (BAT) came in second with 16.5%, while Avalanche’s AVAX came third with 7.95%. The fourth and fifth places were claimed by Chainlink’s LINK and Wrapped Bitcoin (wBTC), with 5.23% and 3.8%, respectively.Analysis and hot topics from the last week:Thanks for reading our summary of this week’s most impactful DeFi developments. Join us again next Friday for more stories, insights and education in this dynamically advancing space.

EU set to invest $177B in blockchain and other novel technologies