The year-long mantra that the crypto market would see a blow-off top in December has proven to be a dud thus far and for the last week, most cryptocurrencies have been under sell pressure and Bitcoin (BTC) is encountering difficulty in trading above $47,000. That said, it’s not all bad news for cryptocurrency holders on Dec. 10 because several altcoins have managed to post double-digit gains due to new exchange listings and protocol upgrades. 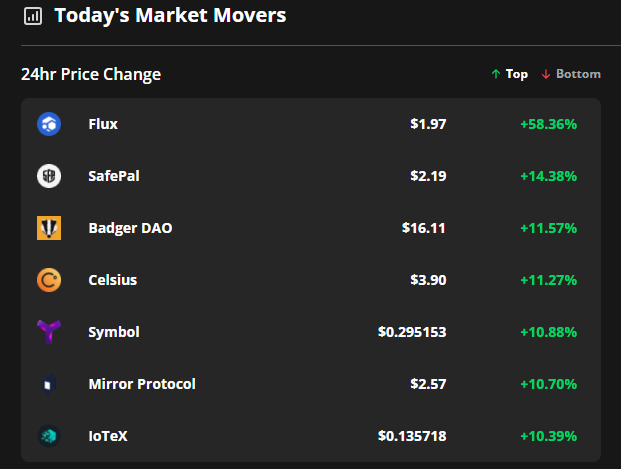 Data from Cointelegraph Markets Pro and TradingView shows that the biggest gainers over the past 24-hours were Flux (FLUX), SafePal (SFP) and Badger DAO (BADGER).

FLUX benefits from the “Binance bump”

Flux is a GPU mineable proof-of-work protocol aimed at creating a scalable decentralized cloud infrastructure for Web 3.0 applications. VORTECS™ data and the NewsQuakes™ alerts from Cointelegraph Markets Pro began to detect a bullish outlook for FLUX on Dec. 9, prior to the recent price rise. The VORTECS™ Score, exclusive to Cointelegraph, is an algorithmic comparison of historical and current market conditions derived from a combination of data points including market sentiment, trading volume, recent price movements and Twitter activity. 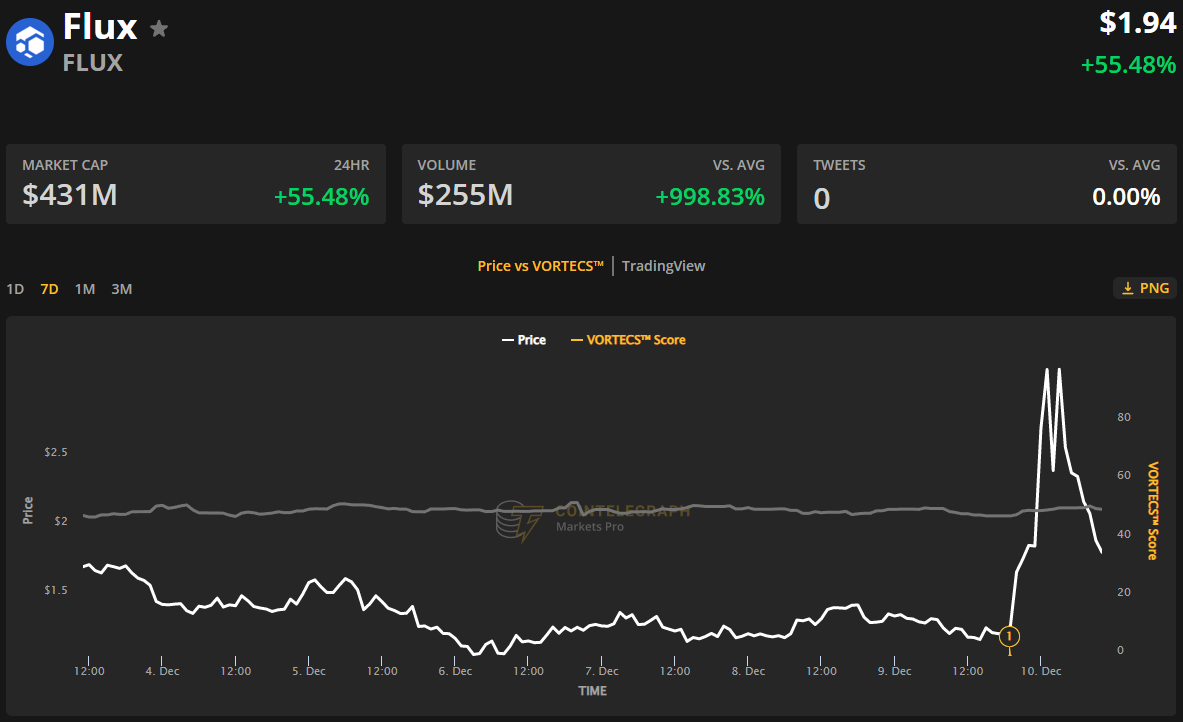 As seen in the chart above, the NewsQuake™ system put out an alert for FLUX on Dec. 9, less than an hour before the price began to spike 150% over the next day.The announcement that helped spark the rapid price rise in FLUX was a notification that Binance would be list FLUX token on its platform. Shortly after this announcement, FLUX price rallied to a new all-time high at $4.01.

The SafePal project is a cryptocurrency hardware and software wallet solution for investors who hold assets on the Ethereum, Binance Smart Chain and Tron networks. Data from Cointelegraph Markets Pro and TradingView shows that after hitting a low of $1.55 on Dec. 6, the price of SFP has climbed 45.84% to hit a daily high at $2.27 on Dec. 10 as its 24-hour trading volume spiked 50% to $158 million. 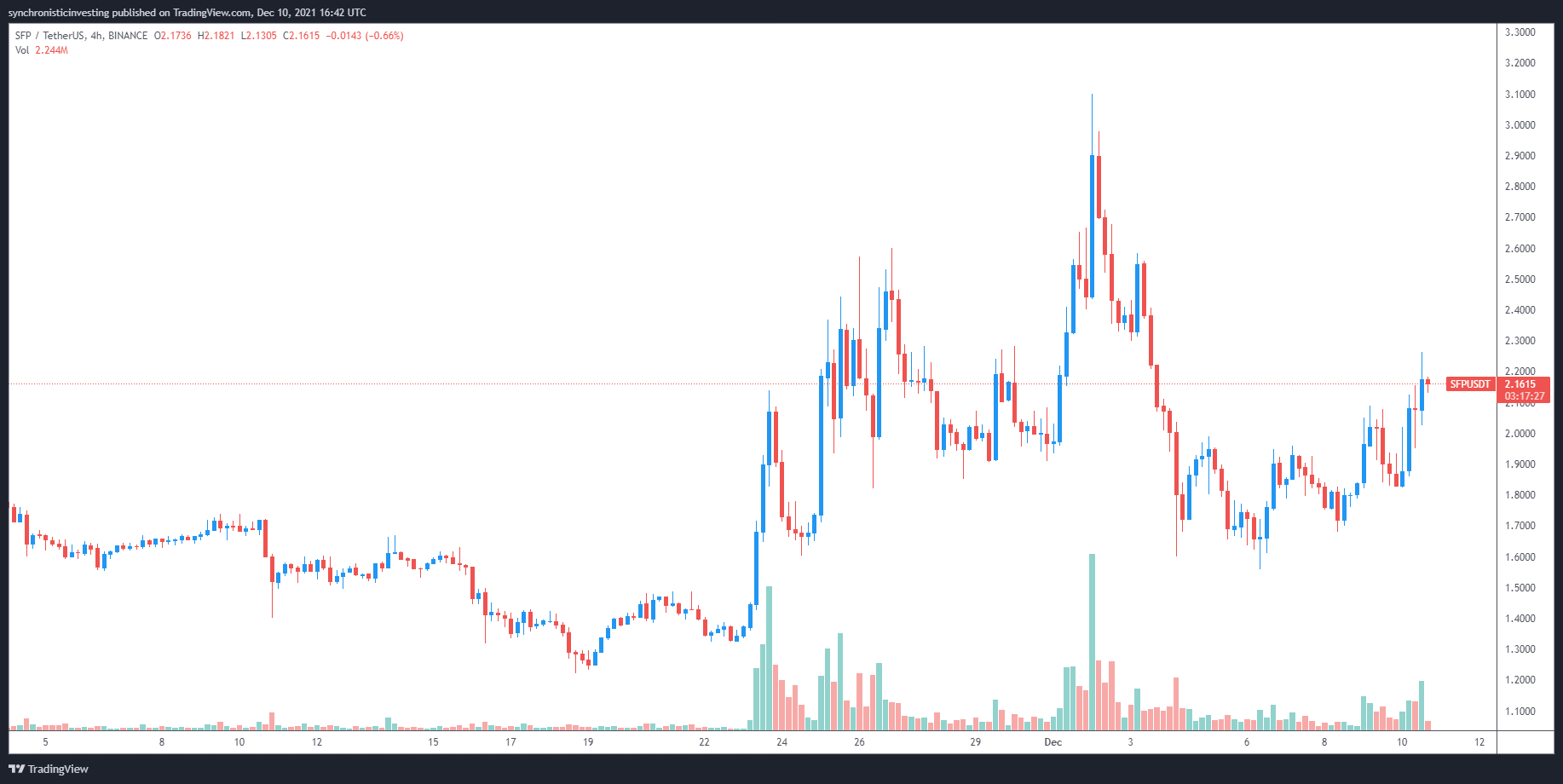 Badger DAO is an open-source decentralized autonomous organization focused on building products and infrastructure that increase the utility of Bitcoin in the decentralized finance landscape. VORTECS™ data from Cointelegraph Markets Pro began to detect a bullish outlook for BADGER on Dec. 9, prior to the recent price rise. 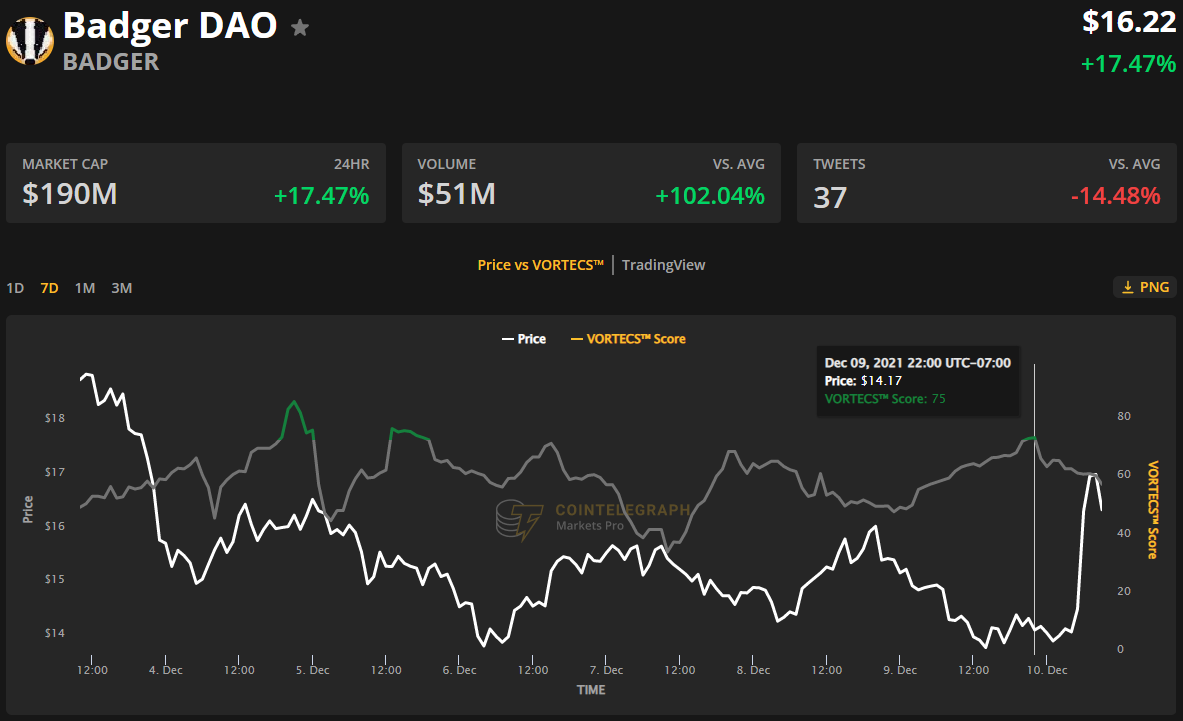 As seen in the chart above, the VORTECS™ Score for BADGER spiked into the green zone and hit a high of 75 on Dec. 9, around three hours before the price increased 48% over the day.The positive price action for BADGER comes as the protocol tries to bounce back from a Dec. 2 exploit that resulted in the halting of the project’s smart contracts.The overall cryptocurrency market cap now stands at $2.218 trillion and Bitcoin’s dominance rate is 40.7%.The views and opinions expressed here are solely those of the author and do not necessarily reflect the views of Cointelegraph.com. Every investment and trading move involves risk, you should conduct your own research when making a decision.