Bitcoin (BTC) starts a new week on familiar ground below $50,000, but anticipation is building for major disruption to begin.After a fresh push above $50,000 ended in rejection, BTC/USD is keeping traders guessing till the last when it comes to near-term price action — including the end-of-year close.With just two weeks to go, the kind of blow-off tops that characterized both 2013 and 2017 seems unlikely to repeat, but on-chain metrics are all but unanimously pointing to upside.With 90% of the Bitcoin supply now officially mined, Cointelegraph takes a look at what could lie in store for investors this week.

Sunday was marked by a fresh push to $50,000 and beyond, which ultimately failed to hold, data from Cointelegraph Markets Pro and TradingView shows. 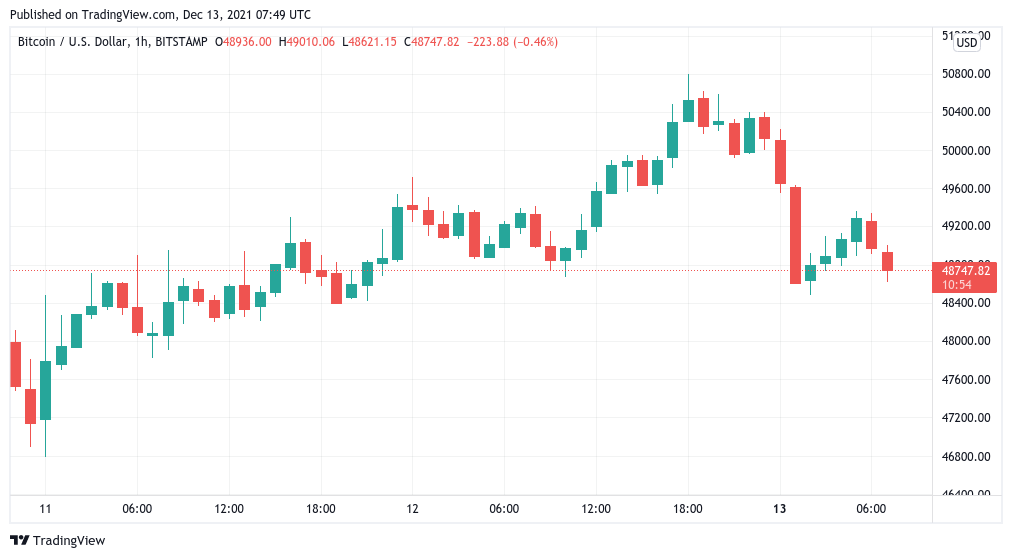 It’s a familiar story, and one that came as no surprise to seasoned market participants.“53K has been my line in the sand as well. Flip that and we’re back in business,” analyst William Clemente reiterated.While Bitcoin remains under a $1trillion asset sub-$53,000, other opinions were far from concerned about the unexpected sideways nature of the market this Q4.For popular Twitter account TechDev, Bitcoin still “rhymes” with previous bull cycle years and seems similar to Q4 last year — right before BTC/USD began its ascent.#BTC Weekly

About as much reason to be bearish here as there was in late 2020 before the first major leg in my opinion. pic.twitter.com/62AptElE2GElsewhere, PlanB, the creator of the stock-to-flow BTC price models, was also optimistic. Uploading a representation of one of his forecasts, he argued that Bitcoin had in fact just been in an extended consolidation phase for most of the year.“Patience is key,” he added. 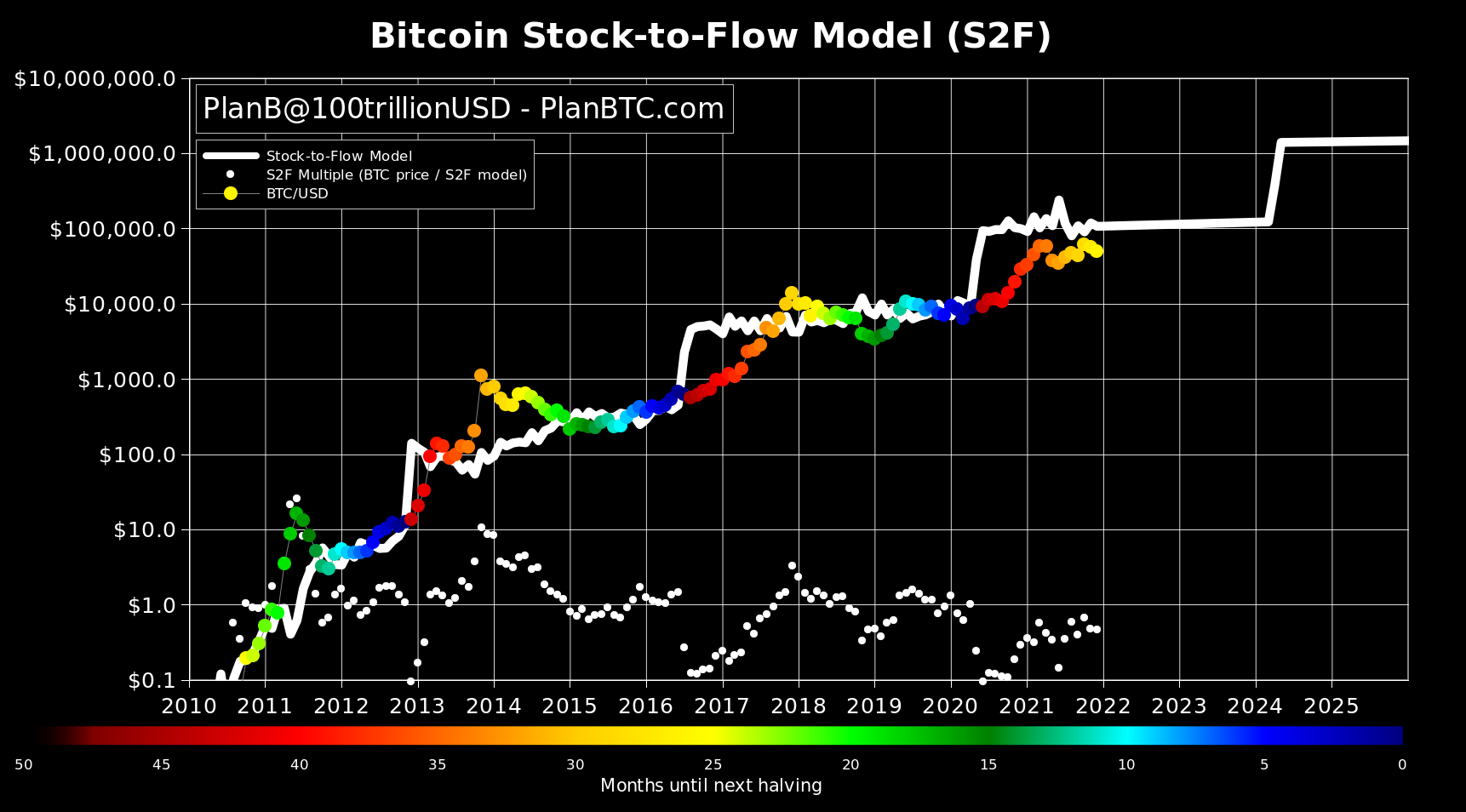 To taper or not to taper?

This week’s macro trigger comes in the form of the United States Federal Reserve and its next announcement on the state of its asset purchase program.A meeting of the Federal Open Market Committee could provide valuable insights into the future of quantitative easing (QE) and the speed of “tapering” asset purchases.Amid an inflationary environment and the ongoing risk of coronavirus fallout, the Fed faces an unenviable balancing act when it comes to the credibility of policies it chose to enact.As Cointelegraph reported, some are eyeing the meeting as being much more potentially disruptive to crypto markets than last week’s Consumer Price Index data, which showed the highest U.S. inflation since 1982.“With no opposition raised by other Fed officials, despite the uncertainty presented by the emergence of the Omicron variant, next week’s meeting look set to see the Fed announce an acceleration in QE tapering, with a $30bn reduction for January (to $60bn of purchases) and a further $30bn reduction in February,” a note from banking giant ING read last week. 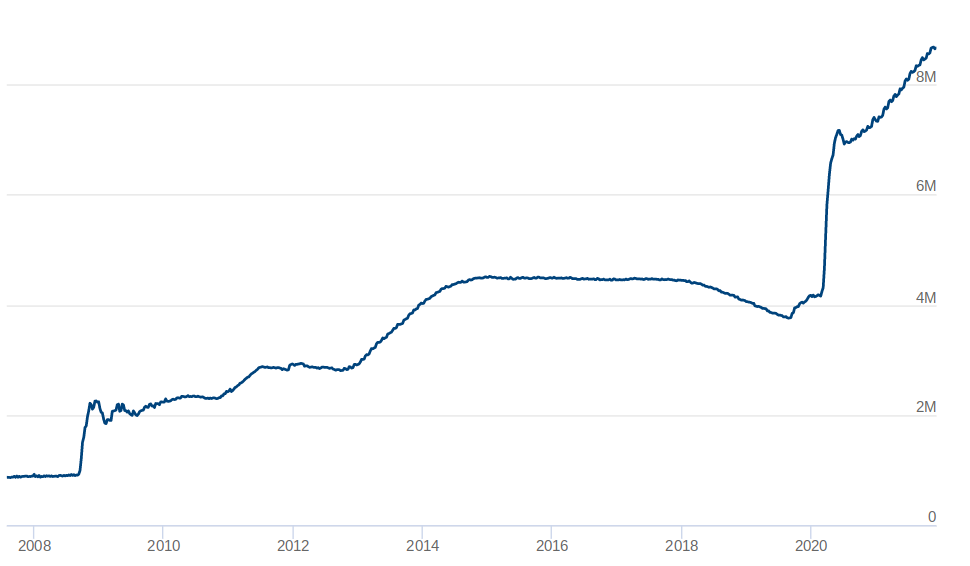 Major changes in QE effectively alter the availability of “easy” money, in the words of BitMEX former CEO Arthur Hayes, and has knock-on effects for risk assets such as Bitcoin.

It’s no secret that on-chain indicators have stayed strong despite spot price decreasing nearly 40% versus all-time highs.Now, more metrics have joined in, giving analyst Cole Garner some serious faith in “green days” ahead.In a series of Twitter posts over the weekend, the well-known statistician outlined several of his “go-to” charts, which have now turned conspicuously bullish.“I think BTC is ready,” he summarized about the outlook for BTC/USD as a result. Chief among the signals was that coming from over-the-counter (OTC) trading desks. These entities’ BTC balance saw a sudden increase last week, corresponding to buying activity among clients.While not always corresponding to price increases, OTC remains firmly on Garner’s radar as “powerful alpha.”“One of the very best leading indicators I’ve ever seen. The more you think about it — the more it makes so much intuitive sense,” he wrote. 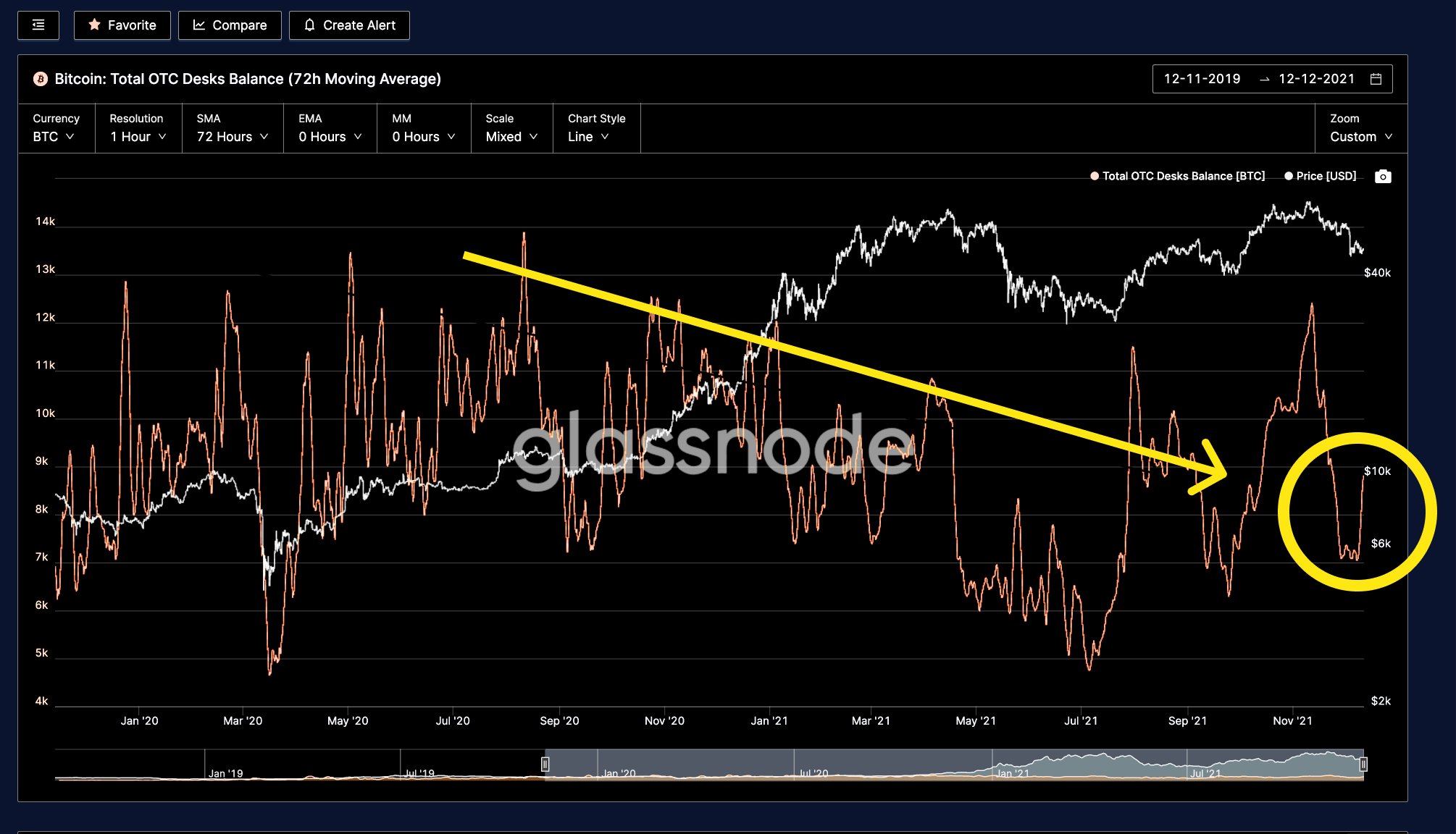 Another is the combined volume delta (CVD) for Bitcoin whales, this sloping upward in what Garner said is an infallible bull sign.CVD is used to determine the ratio of buyers and sellers during market moves, and its data suggests that buyer interest likewise remains strong at current levels.“This metric has evolved to be my go-to indicator, over the course of this bull,” he commented.

As ever, not everyone was convinced, with responses arguing that the spike in OTC numbers could be just that — a brief divergence in an overall downtrend. Others are sticking to a narrative that requires Bitcoin to end 2021 with a whimper, slowly consolidating on the way to a return to the upside next year.

Continuing a previous trend, institutional investors show no signs of divesting themselves of BTC as a “risk” asset under current conditions.Amid the OTC suspicions, fresh data shows that exchange-traded funds (ETF) are busy accumulating and that demand is there for them to do so.The Purpose Bitcoin ETF, Canada’s first licensed spot ETF product for Bitcoin, added 4,342 BTC to its reserves in December, an increase of 17.6%.Now with 28,974 BTC, Purpose shows what many have been arguing throughout the year — that Bitcoin exposure for institutional entities is a tide, which must be catered for sooner or later.

“That’s just one ETF,” Lex Moskovski, chief investment officer of Moskovski Capital, commented.The issue of the U.S. denying spot-based Bitcoin ETFs a market remains contentious, meanwhile, as industry representatives and even lawmakers get in on pressuring regulators to explain their position.“Can anyone explain… why Fidelity Investments, one of America’s best-known investment advisors, had to go to Canada to offer an ETF, or why physically-settled crypto ETFs are safe and legal in Germany, Brazil, Singapore and elsewhere, but somehow not in the United States?” Brian Brooks, CEO of BitFury, told the Senate Committee on Financial Services in testimony last week.

It may be that the market simply does not know what to think.Related: 2 key Bitcoin trading metrics suggest BTC price has bottomedIf the Crypto Fear & Greed Index is any guide, changes in Bitcoin’s overall rangebound price activity are currently able to upend the mood with just a few thousand dollars up or down.

Fear & Greed has returned to the spotlight in recent weeks thanks to the unexpected nature of the BTC downturn.Last week, it hit its lowest reading since July — 16/100 or “extreme fear.” It then almost doubled to 28/100 in a single day before reversing back down to 16 — and then up to 27 — over the weekend.Over that period, BTC/USD acted within a range of around $4,000.“This range has turned my Twitter feed into an emotional rollercoaster,” analyst William Clemente joked alongside a chart showing sentiment reactions to recent price moves.

TechDev, meanwhile, noted that sentiment is still lower than at the start of the year, which Bitcoin opened at $29,000.So too is its relative strength index, a key metric that highlights overbought and oversold phases of an asset at a certain price point.This, TechDev added, is hiding a “big” bullish divergence.

Grayscale Bitcoin premium rebounds as BTC price falls below $35K — What does it mean?