Facebook’s conglomerate of social applications, including Instagram, WhatsApp, Messenger, and its virtual reality headset Oculus, all suffered a major power outage on Monday, switching the platforms offline for a total of six hours to the effect of billions of users and businesses across the world.The incident was first reported at approximately 3:16 pm UTC on Monday when a surge of complaints emerged from users worldwide claiming that they were unable to access their favorite social networking platforms.A Cloudflare post-analysis of the crisis concluded that Facebook “had stopped announcing the routes to their DNS prefixes,” which meant that the platforms “DNS servers were unavailable.”The graph below showcases the inability to access Facebook’s domain web address slightly prior to 4pm, through to the minutes following 9pm UTC. 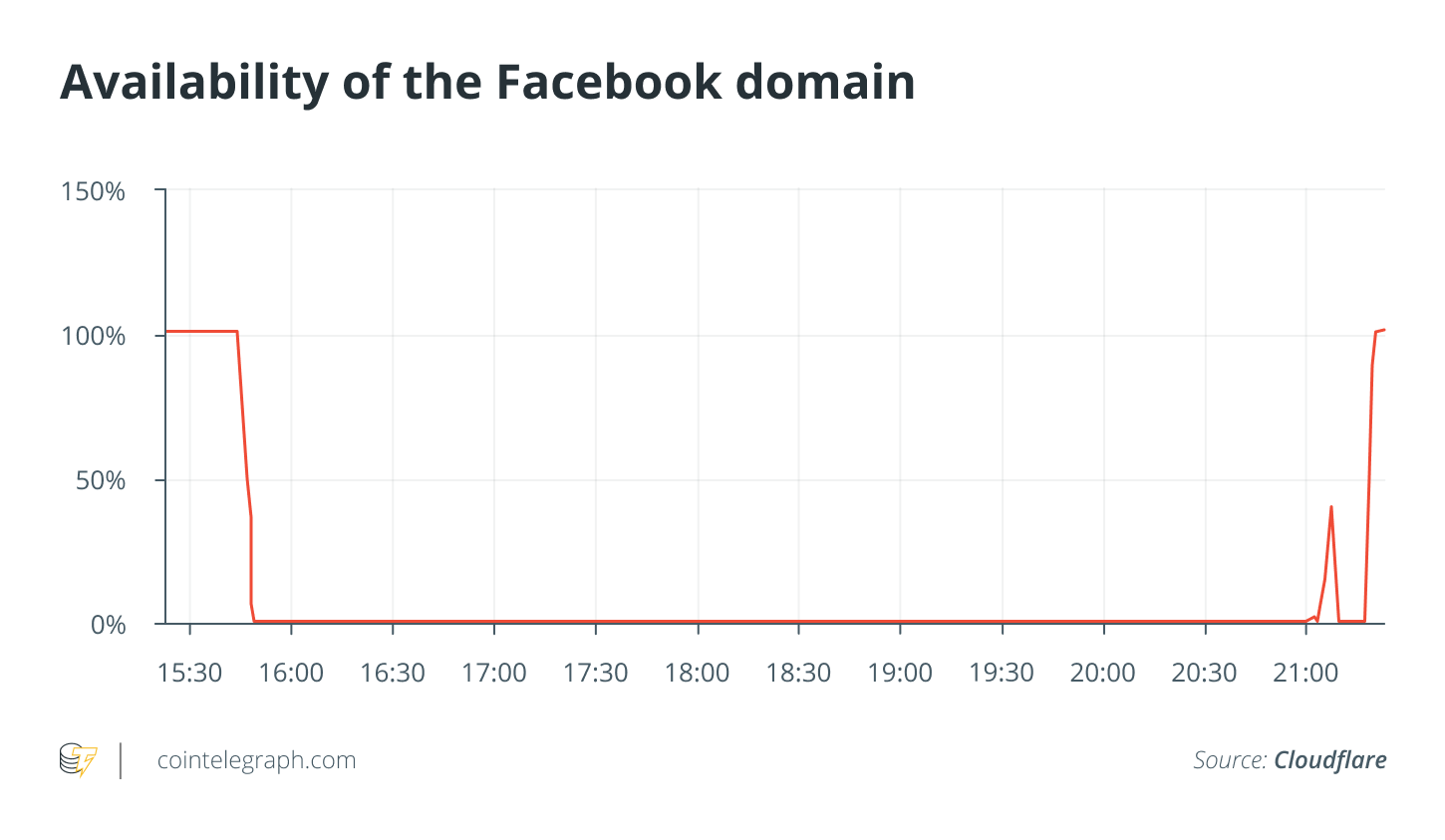 Though a small number of individual claims circulated a suspected hack or manipulation after the recent whistleblower story, evidence to conclude these theories was not officially reported.In an official blog post released Tuesday, Facebook detailed its suspicions for the cause of the outage:In the wake of the March 2019 outage, which lasted for 24 hours, Facebook equally cited an issue with a “server configuration change.”In yeday’s statement, the social media giant continued on to say:

As Facebook’s behemoth stumbled in the public plaza, the crypto communities’ roar for open, decentralized social networks echoed around the neighboring town of Twitter.Analytical data shown below reveals that search engine queries for social media applications outside Facebook’s realm, including Twitter and TikTok, rose almost 200% during the six hour outage. 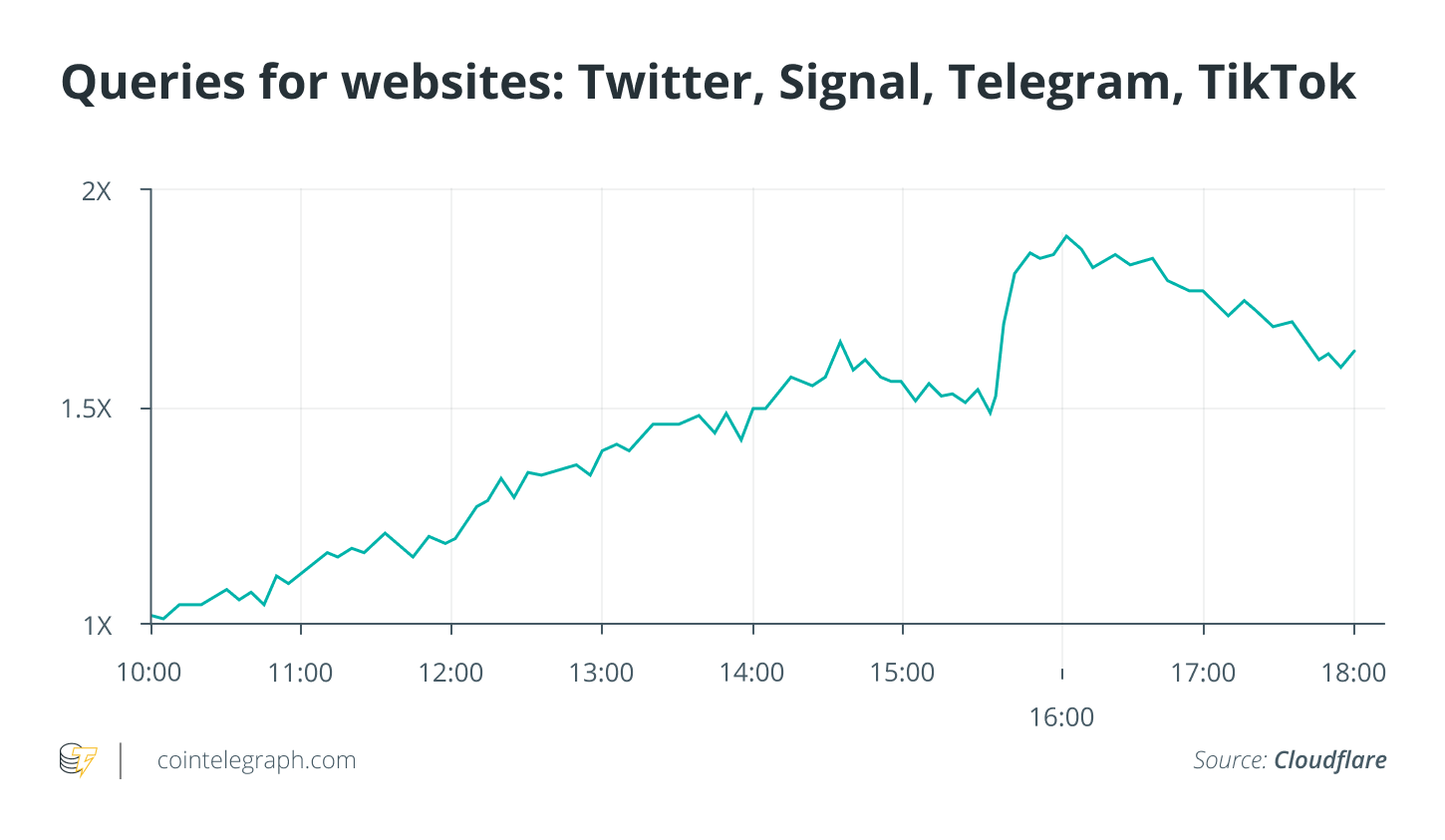 A decentralized standard for social media is an initiative that Twitter CEO Jack Dorsey is passionate about pursuing as stated in a 2019 tweet, and once again earlier this year.We are trying to do our part by funding an initiative around an open decentralized standard for social media. Our goal is to be a client of that standard for the public conversation layer of the internet. We call it @bluesky: https://t.co/51or6OuNNvSeemingly in response to Dorsey’s endeavors, Stani Kulechov, CEO of decentralized finance (DeFi) lending protocol Aave, expressed ambitious plans to launch a Twitter rival built on Ethereum later this year, claiming, “Since Jack is going to build Aave on Bitcoin, Aave should build Twitter on Ethereum.”Ironically, via a tweet!

The Achilles’ heel of social giants

Over the past few years, the influx of moral concerns surrounding privacy breaches, data gathering, censorship and fake news has fuelled the conversion for a renovation of the social media platforms that have come to dominate our democracy. The prevalence and severity of such issues have even begun to deter conscious users away from centralized behemoths Facebook, YouTube and Twitter in favor of more liberating alternatives.The rapid emergence of cryptocurrency and blockchain technology, specifically its native features of decentralization, transparency and community reward, has empowered the rise of these next-generation initiatives.Representing Web 3.0, the platforms of tomorrow promise to cultivate a fairer, more inclusive model of digital interaction, realigning the values of the social space to encourage free expression, user welfare and self-governance.Subsocial is an open platform for decentralized social networks and marketplaces built on the Polkadot and IPFS stack. It aims to provide users with full data sovereignty, which means liberation over their sensitive data, content and revenue streams to facilitate the development of fair, open and independent communities.By utilizing core features such as spaces and posts, users can adopt a DIY approach to creating their own decentralized versions of the most popular social applications we use today, such as Medium, Twitter, Reddit, Instagram, Patreon and more.Conscious of the well-documented flaws of their predecessors, users of Subsocial are granted full creative license throughout their experience, benefiting from “personalized news feed and notifications, transparent reputation, full-text searching, rich content formats, without sacrificing SEO.”As the project’s light paper states, the network is more than just a “blogging platform with crypto payments.” It is “social finance where social media meets DeFi.”Related: Bitcoin moves past $49K as Facebook, Instagram and WhatsApp go downCointelegraph spoke to two active participants in the decentralized ecosystem striving to build alternative, Web 3.0-powered models to the current tech experience. Colin Pape, founder of decentralized search engine Presearch, spoke of the importance of ownership in the social sphere:Ed DeLeon, CEO of Anatha, a decentralized wallet, spoke of the potential impact DAO’s could make in this sector:

With the help of one NFT marketplace, patients may be able to share data with their providers securely

Crypto is the most dangerous investment, Bank of Russia governor says

Crypto and ‘meme stocks’ shunned by 90% of UK financial advisers