As of today, Coinbase has 139 tradable assets. The exchange added a whopping 83 assets to its trading list in 2021, nearly double the number of assets it had accumulated in the eight years since its founding. Is this rapid expansion a simple cash-grab? Are any of these lesser-known tokens and coins securities? Is this irresponsible or overly ambitious? What does this rapid expansion of assets by Coinbase mean? 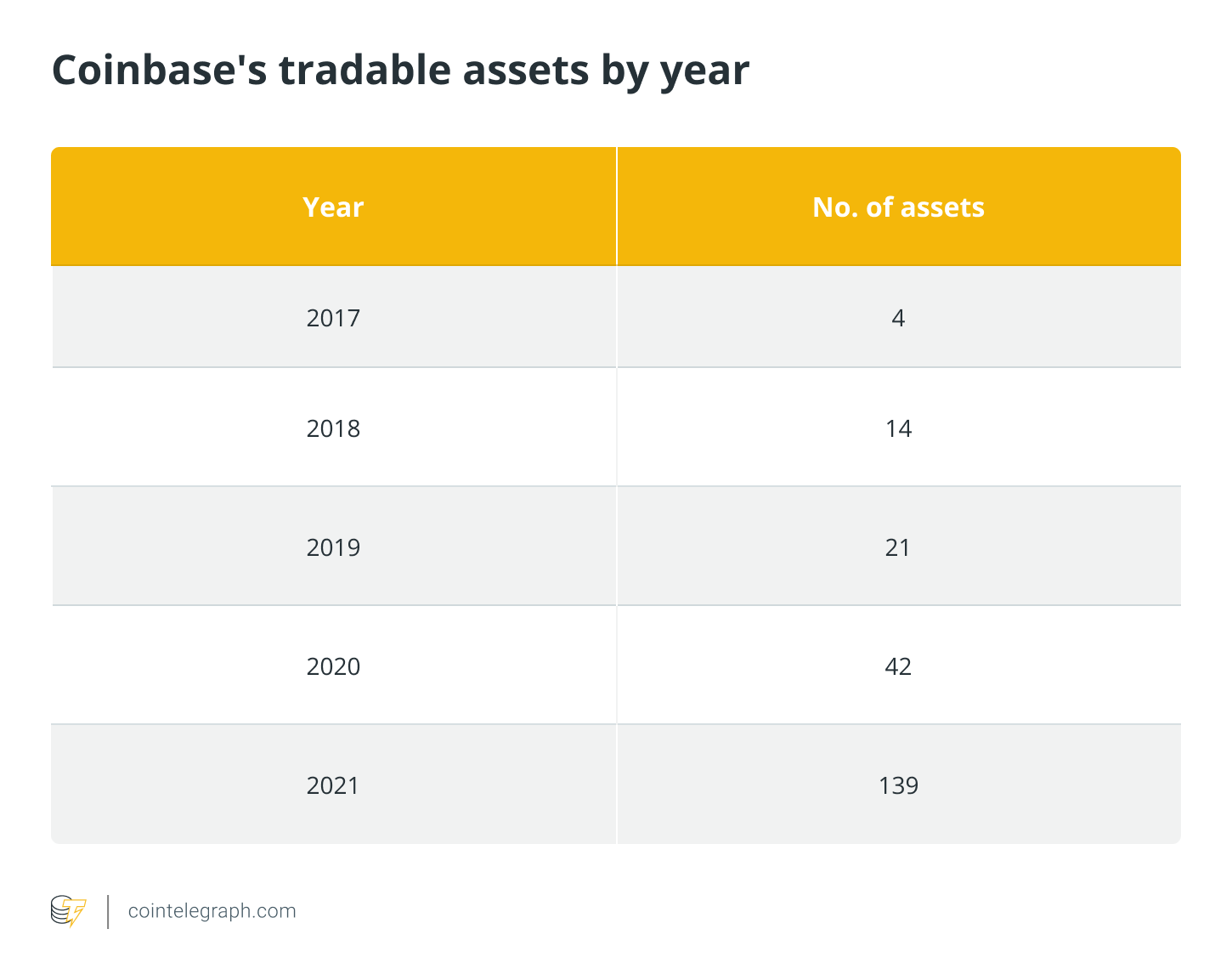 I feel the answer to the first question is an emphatic “No!” Coinbase is making a lot of money on trading fees, but its token list expansion is not about the money. Coinbase started out with a small booth at a conference “just trying to make something that customers wanted,” pitching T-shirts and a hosted Bitcoin (BTC) wallet. Now, Coinbase is the second-largest crypto exchange in the world. 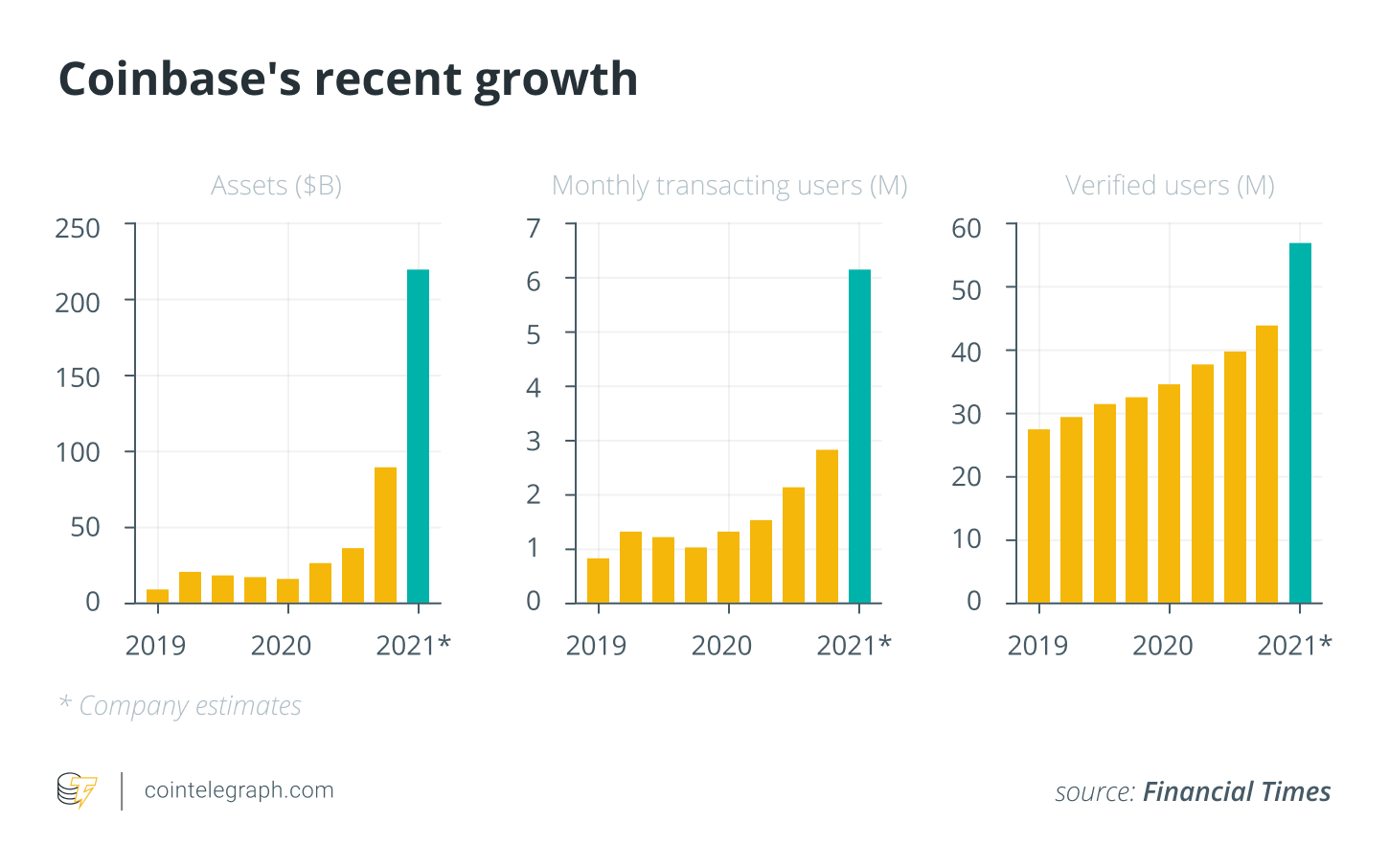 It’s a common tale that an entrepreneur builds something, finds success, sells and moves on, but Coinbase founder and CEO Bryan Armstrong was manning that small booth eight years ago, and is still at Coinbase today. The exchange stays true to its — and Armstrong’s — core values: economic freedom, property rights, a more efficient global system of exchange, and in my opinion, just building the things that customers want.Back in June of this year, Armstrong posted a series of tweets indicating Coinbase’s change of approach to determining which assets get listed. To sum it up, Coinbase shifted from a merit-based approach depending on internal criteria to a pragmatic approach based on externalities. This new approach allows the market to decide which assets have the most value — as it should be. Reminder: Do your own research, even if it is a Coinbase listing.

Coinbase acknowledges and accepts its leadership role in shepherding in new regulation that is beneficial to the new economy. The exchange really does seem to be aware of its leadership role in the crypto space, and works hard on compliance. It therefore wouldn’t make sense for Coinbase to list a gang of assets that might provoke regulators (in the United States, “nonaccredited” investors are barred from early project investment).While the Securities and Exchange Commission is treating stablecoins as securities, Coinbase’s listing parade has continued almost weekly. It is very likely that there are assets added to Coinbase’s trade pairs that the SEC would deem securities. However, the barriers that currently exist in the name of “investor protection” may finally be coming down. Coinbase’s aggressive listing activity squares with the economic freedom, strong property rights, and core values that it supports, and may even hint at undisclosed policy being discussed privately.As Melissa Strait, chief compliance officer at Coinbase, pointed out:She also added: “We strongly believe that in order for cryptocurrency to gain widespread acceptance, we must have a constructive relationship with the regulators and agencies that have been charged with oversight of the crypto ecosystem.”Nearly all the assets listed this year are ERC-20 tokens on the Ethereum network. Why? Because they would be deemed “sufficiently decentralized.” This phrase is taken from a speech that William Hinman (former director of the SEC’s Division of Corporation Finance) made in June 2018. So long as an asset is as decentralized as Etherum was on the day of that speech, it is informally and tentatively not considered a security. Thank you, Hinman!

If there is one thing I have observed in researching this topic, it is that Coinbase is very organized and process-driven. I guess it should be obvious, considering its success. Coinbase’s team is aware of the legal circumstances in which the exchange operates, and has built decision-making systems designed to keep pace with this breakneck industry. Armstrong himself said that he wants to on-board a billion customers. Now that’s ambitious! Overly, though? Not if you believe in a free and open financial system beyond the control of any central actor.Coinbase claims to be “agnostic” on listing tokens. That is, Coinbase doesn’t make any judgement on the projects it lists, but rewards the builders that check all of the boxes of its listing criteria. It is interesting to see the mix of projects that are making it onto the Coinbase platform. After all, a Coinbase listing is like making it to the big leagues.

Coinbase listed 16 DeFi projects in 2021. It doesn’t come at a shock that decentralized finance takes the top spot. First-layer projects came in second place with 12 — again not really a surprise, as everyone wants to be the next Ethereum. In third place were eight decentralized exchange tokens, while tied in fourth place were stablecoins and NFT gaming, each with seven projects. Taking fifth place were layer-two Ethereum projects.Coinbase really stepped on the gas this year. It can mean any number of things depending on who you ask. For me, it is a very bullish sign for the overall industry. Coinbase is giving its customers what they want: more choices and more opportunities to find that undervalued gem. It’s up to each individual to do their own due diligence. What some would call the most “user-friendly” platform around is providing access to a decent number of assets now. Having the freedom of choice is a responsibility — choose wisely, or you may find that the SEC will feel the need to choose for you.This article does not contain investment advice or recommendations. Every investment and trading move involves risk, and readers should conduct their own research when making a decision.The views, thoughts and opinions expressed here are the author’s alone and do not necessarily reflect or represent the views and opinions of Cointelegraph.

2021: The dawn of democratized launchpads