Blockchain security company PeckShield has alerted investors of a possible rug pull event after identifying a massive 46.99% price drop on MetaSwap’s MGAS token. The MetaSwap protocol allows nonfungible token (NFT) swaps over the Ethereum, Binance and Polygon blockchains.Following the unexpected price drop, all official accounts linked with Metaswap Gas — including Twitter, Instagram and Medium — were removed, supporting PeckShield’s claim of a rug pull.#RugPull PeckShield has detected that @MetaSwapMGAS soft-rugged, the stolen funds (1,100 BNB) are transfered to @TornadoCash (#BSC). DO NOT STAKE in this contract and if you’ve approved it, REVOKE https://t.co/b7sSsMz3ZEAccording to PeckShield, 1,100 Binance Coin (BNB) tokens, worth almost $602,000, were transferred to an account on Tornado Cash, an Ethereum-based non-custodial solution that is used to break the on-chain link between the sender and the receiver. This process adds to the difficulty in tracking the stolen funds. 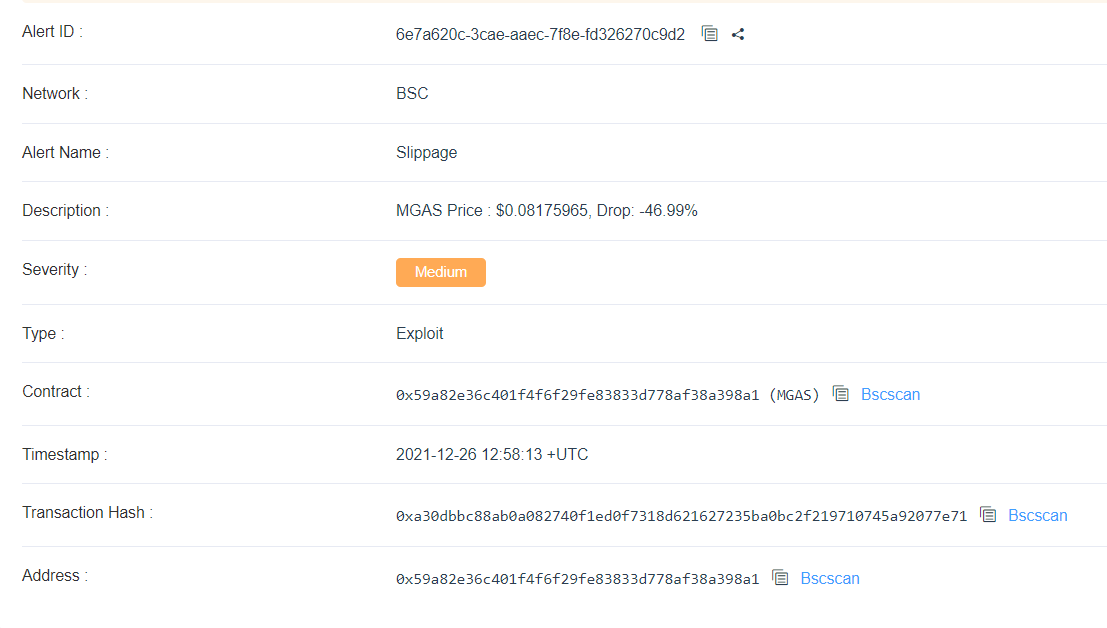 PeckShield advises investors to stop staking on Metaswap Gas and revoke existing contracts to avoid further monetary losses. Related: Bent Finance confirms pool exploit, advises investors to withdraw fundsIn December, alone, numerous crypto entities became victims to a series of exploits, resulting in a cumulative loss of over $600 million. On Dec. 21, Bent Finance proactively asked investors to withdraw their funds after confirming a pool exploit.1/ There was an exploit from the bent deployer address, it added balance of cvxcrv and mim to an address on an unvierifed update 20 days ago. We just discovered this today. There are multiple members on this team and we will make this right.Similar to other victims of the crypto community including Grim Finance, BitMart and AscendEX, Bent Finance promised its investors to return all the stolen funds. However, the team is yet to announce a plan for the same: