The nonfungible token (NFT) collections by Yuga Labs have experienced a dramatic downturn in transaction volume over the past 24 hours. Otherdeed is down just over 50%, Mutant Ape Yacht Club (MAYC) is down 46% and Bored Ape Yacht Club (BAYC) is down 25%, according to data from NFT market tracker NFTGo. Over the past 24 hours, general NFT market activity has mirrored Yuga’s collections, where volume has dropped 31% to $113 million. However, prices have not yet followed suit, as the total NFT market cap has dropped marginally to $19.5 billion in the same period.

Those collections comprise three of the top five traded collections globally. Each collection except Otherdeeds has seen nearly 50% drop-offs in volume over the past seven days as well, possibly indicating the NFT market is cooling off. Among the top ten collections by sales volume, only three are in the green. CyberBrokers is in second place and is up 4,124%, Azuki is in fifth place and is up 7.5% and ninth-place Doodles is up 22.74%, according to NFT market tracker CryptoSlam.According to NFTgo, the transaction volume of Yuga Labs series NFTs has dropped significantly in the past 24 hours. Otherdeed MAYC BAYC trading volume dropped by 44%, 41% and 30% respectively, BAYC floor price fell below 100ETH. https://t.co/DcsF79ceplIn addition to collections from Yuga Labs, which are all traded on Ethereum, sales volume across eight of the ten most active blockchains for NFTs has suffered double-digit losses over the past seven days. On average, sales volumes are down 22.5% among Ethereum, Solana, Flow, Avalanche, Ronin, BNB Chain, WAX and Panini. Only Polygon and Tezos sales volumes are up 16.5% and 58.8%, respectively, according to data from CryptoSlam. 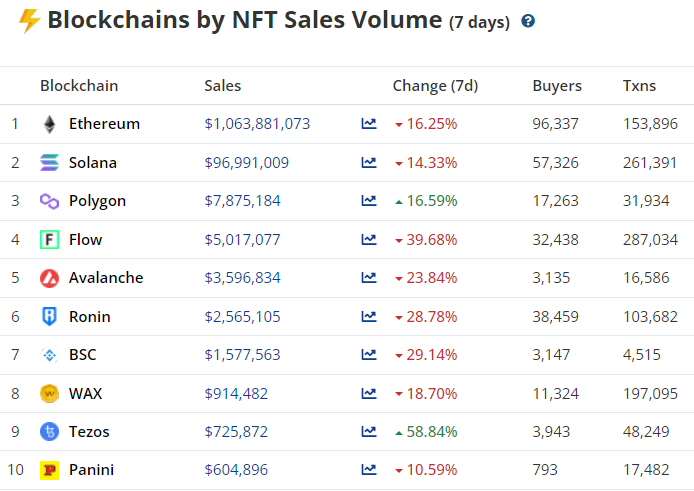 The sluggish start to NFT trading in 2022 has not deterred researchers from predicting that NFTs are poised to grow by 4.5 times by 2027 to become a $13.6 billion industry. Cointelegraph recently reported on Saturday that MarketsandMarkets said mainstream influencers, gaming communities and increased demand for digital art, will push the NFT market to those lofty heights over the next five years.