The year 2021 seems to be a big year for the blockchain world as several projects, such as nonfungible tokens (NFTs) and centralized decentralized finance exchanges (CeDeFis), are taking the central stage. Also at the forefront is Facebook’s Libra.Not too long ago, the media was rife with the news that the world’s largest social media network was developing plans for a global digital currency. Then, after a while, it looked like Facebook shelved plans for it. Disputes with regulators around the globe had a hand in delaying and redirecting Facebook’s plans a bit. Instead of backing out, Facebook decided to strategize and launch a “different” global digital currency later in 2021, after rebranding the project to Diem.It is different in the sense that they had a change of name and administration. However, the Libra Association, later renamed to Diem Association in December 2020, will manage the project.

Facebook Diem is a soon-to-be-launched permissionless payment system based on blockchain technology. The system will have a stablecoin called Diem and run on its blockchain network.Although Facebook proposed the project, Diem Association will oversee the entire operation of the project for transparency’s sake. The Diem Association is a body of companies from different sectors of the economy, including technology, fintech, telecoms, venture capital and nonprofits.The initial coin, Libra, was not decentralized, and neither is Diem. While the goal is to be permissionless, the current plan is for Diem to run on a permissioned blockchain. Consequently, only members of the Diem Association can run transactions on it.However, it is so because the development team has not yet developed a robust solution that can handle permissionless transactions for its billions of potential users. Enthusiasts are hopeful this will change as soon as the project develops in the pipeline.In the long run, the ultimate objective of Diem is to help the world to gain access to financial services easier and faster. The United States dollar, the euro, the British pound, and other major fiat currencies will back up the Diem Project. If the project gets approval from the U.S. regulators, Diem will function as a full-scale central bank that runs on blockchain technology. As you probably know, this is nothing like Bitcoin (BTC) and others. 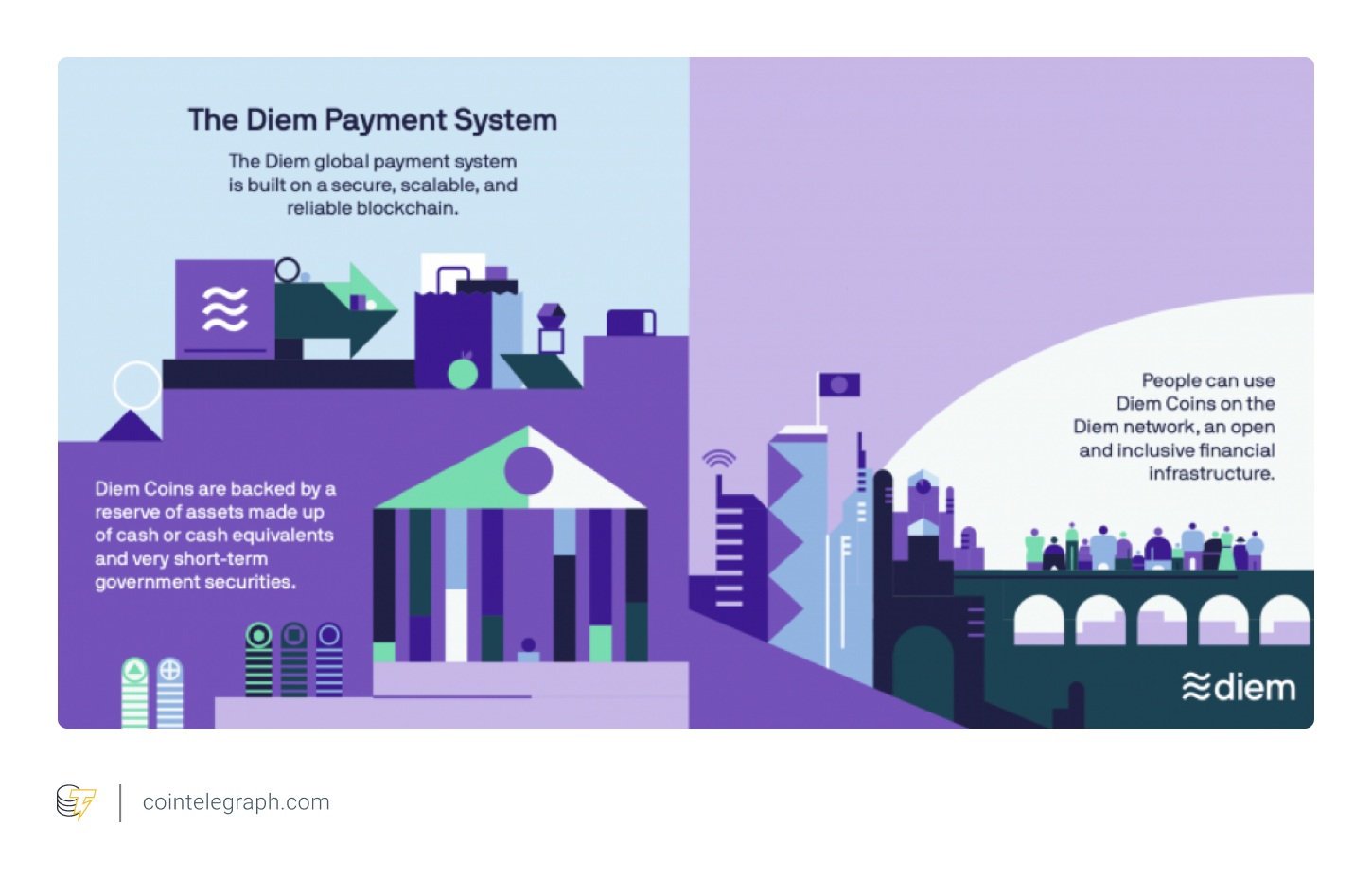 Facebook’s new global digital currency has its sights set on revolutionizing the global payment system. As such, the Facebook Diem project comes with three unique parts that work in sync to create an inclusive and safe financial system. They include:

One component of the new Facebook Diem cryptocurrency is a blockchain infrastructure with scalability and trustworthy security that serves as the technological foundation of the payment system.Diem’s source code is open-source on Github. The source code, written in Rust, can be accessed by all and sundry.It affords scalability and would help the infrastructure to host several projects. Diem is also developing a new programming language called Move for building smart contracts and executing custom transactions.

While it’s pretty easy to build a digital wallet after undergoing renowned practical classes, Novi is a sophisticated wallet that requires all the time and attention you can afford. One of Facebook’s numerous companies, Novi Financial, is developing the digital wallet for the Diem Project. The wallet was called Calibra up until late 2020.Novi is a standalone app that we expect to support integration into WhatsApp, Messenger, Instagram, and probably several other platforms. Its ease of use is already mind-blowing.

The Diem coin is one crucial component of Facebook’s new global digital currency project. It has a solid backing of the Diem reserves, which includes cash assets or cash equivalents.There are also short-term government securities. As such, Diem is a stablecoin. According to the development team, the coin will not be minable as it is with Bitcoin and a host of others. In its initial stages, only Diem Association members can process transactions. However, Diem plans to fully transition into a permissionless proof-of-stake system within the first five years of its launch.

As with other reputable cryptocurrencies, some tenets act as guiding principles for Facebook Diem’s function and design. So here are some key values firing its unique design as all hands are on deck for its launch later in 2021:

There are tons of opportunities that a cryptocurrency backed by a company with the might and reach of Facebook can offer users across the globe. In addition to that, the unique opportunities that it offers make Facebook Diem a great creation in this crypto age. Here are some ways that Facebook will be using Diem soon:

Users should expect remittances and money transfers to be easier and stressless. In addition to ease, the project assures a fast transaction speed and less expensive charges than those of financial intermediaries.The long processes involved in sending money, especially across borders, via traditional financial intermediaries could well be a thing of the past.

One of Facebook’s focuses is on creating better economic opportunities and effective global e-commerce. It becomes an even easier achievable use case when you consider that the Diem Association has billions of users and Facebook has at least three billion global users.Being one of the Diem Association members, Shopify will ensure that the e-commerce site owners can easily integrate the coin. Every member company that runs B2C services will implement the Diem system on their platform — that is unmatchable ease in every sense of the word.

Diem can help to bring down the cost of sending funds cross-border, which is already high enough at 6.5%. Being a cryptocurrency with adequate payment systems in place means that Facebook Diem is almost entirely digital.Transactions will be pre-programmed into its database. Expect operating costs are to be significantly less than those incurred through traditional remittance channels. The result will be a lower cost of use and a higher market share on the part of cryptocurrency users.

Governance is one of the crucial use cases of the Diem cryptocurrency, and it stems from Diem’s governance structure. Compromising the functionalities and features of Diem is impossible. In turn, this ensures that the project can help to serve as the model monetary alternative for the passage of financial flow in governance.What’s more? Government agency transactions for various public welfare tasks, in addition to a detailed overview of grants and expenses in the public domain, will guarantee benefits for the public.Besides, since Facebook does not have sole control over Diem, it is not possible to misrepresent the use of Diem against the public interest.Here is how Facebook Diem differs from Facebook Connect. Facebook launched Facebook Connect in May 2008 as the next iteration of the Facebook platform. It allows users to connect their Facebook friends, identity and privacy to sites on the internet. On the other hand, Facebook Diem is a permissioned and blockchain-based system of payment that includes a private cryptocurrency.

Facebook’s Libra is coming with risk

The announcement of the launch of Facebook’s Libra generated various debates. Some believed it would rival sovereign currency while others looked at the technological and data privacy issues it posed. To be more specific, those who believed it would replace sovereign currencies may have gotten it wrong for several obvious reasons while those who considered the project in light of Facebook’s data violation history and monopolistic nature could be right. First, the Libra currency is said to be backed 1:1 with traditional currencies, such as the U.S. dollar, the euro, the yen, etc. Saying that Libra, the supposed secondary currency, will be an alternative to its base currency is incorrect. It raises the question of how a secondary currency relying on a primary currency for value will replace it. That being said, the possible threat is that it could manipulate users’ data. For instance, Hyun Song Shin, economic adviser and head of research at BIS, acknowledged that big tech’s involvement in digital currencies comes with some potential benefits even though it could reduce competition and create data privacy issues. Shin re-emphasized: “The aim should be to respond to big techs’ entry into financial services to benefit from the gains while limiting the risks.” He added:Today, anyone can build a cryptocurrency payment system from home. However, the defining factor is that reputable organizations with verifiable track records back up Facebook’s Diem.The views, thoughts and opinions expressed here are the author’s alone and do not necessarily reflect or represent the views and opinions of Cointelegraph.

The Metaverse, play-to-earn and the new economic model of gaming

Bitcoin is ‘own worst enemy’ and will lose to Ethereum: Charles Hoskinson