NFT (nonfungible token) games are an exciting new form of entertainment, but one project goes one step further by leveraging the fast-growing trend in a useful way.The Tokenpuss NFT project lets gamers collect and play with unique NFTs representing platypus – a semi-aquatic mammal living in Australia. The goal of the project is to raise awareness about platypus, which is nearing extinction mainly because of the 2019 bush fires that devastated Australia and damaged their habitat. Besides raising awareness, 10% of the profits will go directly towards Australian wildlife conservation.The project has 5,555 unique NFTs called ‘Tokenpuss,’ which are going live on Dec. 12. It is launching in two stages. Early adopters of the NFTs will see their minted Tokenpuss showing up on Opensea, the largest NFT marketplace by trading volume.Next, Tokenpuss NFTs will be integrated with a blockchain-based mobile game that is currently built in partnership with an Australian game studio that has already generated millions of downloads worldwide.

A Tokenpuss is a cute creature that lives in the metaverse. It can be traded, collected and used to play in the upcoming mobile game. All Tokenpuss NFTs have the same posture, while their fur, accessories, and background vary in color and type. While no NFT is available at the time of writing, you can get a feeling of what you can possess based on the samples revealed on the official website or Twitter profile. 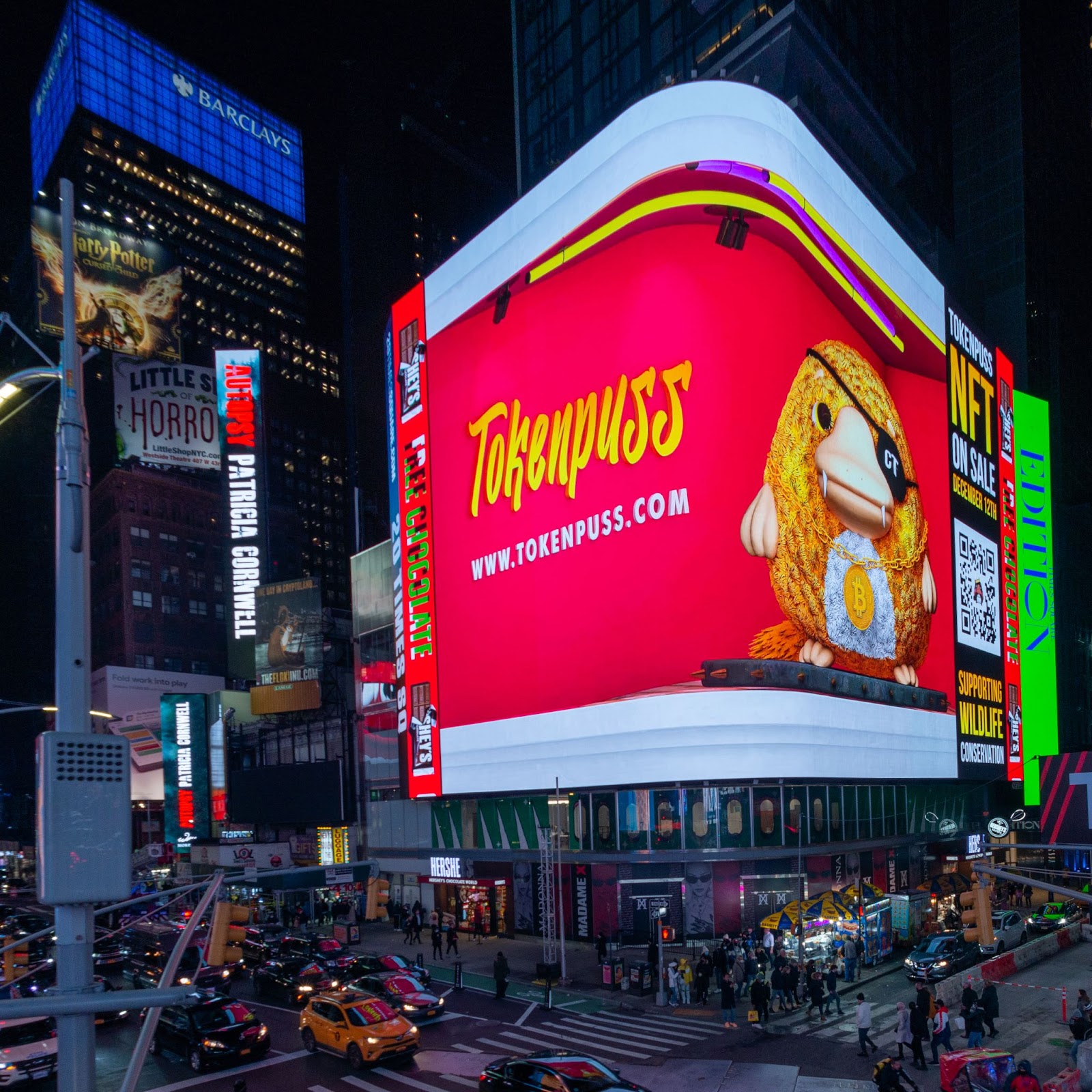 (Tokenpuss banner on Times Square, 2021)Besides the weekly giveaways to Tokenpuss followers, every tenth of the first 100 owners will get access to an airdrop. Also, every 500, 1,000, 2,000, 3,000, 4,000, 5,000, 6,000, 7,000, 8,000, 9,000 and 10,000th owner will get a unique piece of merchandise. After all of the tokens are minted, the project will open a merchandise shop and will give away $10,000 worth of Ethereum (ETH) to a lucky ‘minter’ with a specific NFT.The project is getting traction ahead of the launch thanks to partnerships with several YouTube influencers, including CryptoWendyO, CryptosRUs Aka George T, Crypto Daily Aka Cameron and Jimipapi.

Saving the platypus from imminent extinction

As mentioned, the Tokenpuss NFT project contributes to improving the habitat and conditions for the platypus species, which is evolutionarily and morphologically unique, being the only living species of the Ornithorhynchidae family and one of only five extant species of monotremes.The platypus lineage is estimated to have originated about 120 million years ago. The main features of the platypus include its duck-like bill, waterproof fur, webbed feet, and its use of electroreception to detect prey.Unfortunately, this iconic Australian species is currently facing several challenges impacting long-term population viability. Since the platypus species is endemic to Australia, the main problem relates to the extreme drought across much of eastern Australia, which peaked from 2017 to 2019, and the fires that devastated large portions of the country’s land. In some regions, the drought and fires were the worst in over a century, causing incidences of platypus mortality and distress, as reported by landholders, zoos and platypus conservation groups, among others.The fires of 2019-20, which came after the severe drought, intensified concerns about the condition of platypuses in impacted rivers, and the Tokenpuss NFT project is partnering with leading global organizations and influencers to raise awareness to the issue.Disclaimer. Cointelegraph does not endorse any content or product on this page. While we aim at providing you with all important information that we could obtain, readers should do their own research before taking any actions related to the company and carry full responsibility for their decisions, nor can this article be considered as investment advice.

Point of no return? Crypto investment products could be key to mass adoption

NFT sales down 90% since market peak