The launch of ETH2 staking service Rocket Pool saw it hit its stage two cap in just 45 seconds according to the co-founder of hosting partner Allnodes Konstantin Boyko-Romanovsky.In its first two days of operations, Rocket Pool has registered 237 node operators across 42 global locations, with 1088 ETH staked. According to an announcement the platform now has Total Value Locked of 4000 ETH ($13.9 million USD) in value, including collateral from the platform’s Rocket Pool (RPL) token.         Rocket Pool aims to become the “primary staking infrastructure for Ethereum, by providing a decentralized, easy to use staking network for individuals and businesses,” according to the whitepaper. The protocol is progressively rolling out over four weeks. During the stage one of the launch on Nov 9, protocol limits quickly maxed out. During yesterday’s stage two launch on November 10, node operator minipool slots maxed out in just 45 seconds after launch. The stage two deposit pool limit of 480 ETH ($2.3 million) was quickly reached. Rocket Pool was initially forced to postpone its Oct. 6 launch due to a potential vulnerability discovered on the network.Boyko-Romanovsky said this week’s two stages went off without a hitch, aside from some minor tweaks made Monday night to change the website to show ‘mainnet’ and not ‘testnet’. 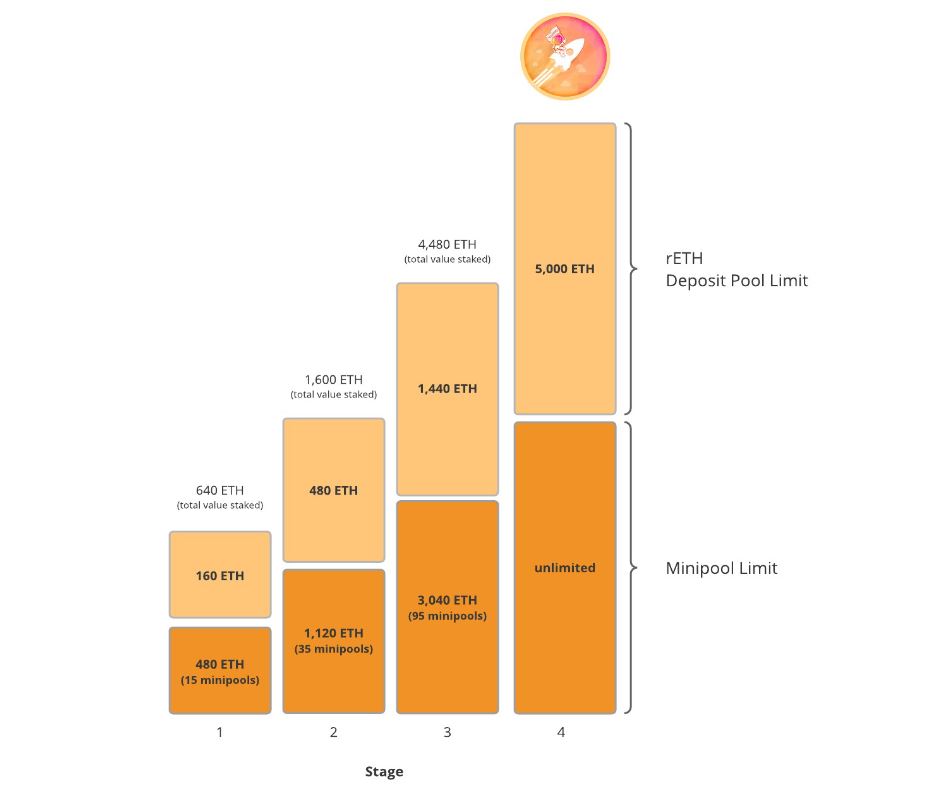 The launch of Rocket Pool marks the removal of several entry barriers for Eth2 stakers. To run an Eth2 node you normally require a deposit of 32 ETH ($155,000) and need to maintain permanent uptime. Rocket Pool enables individuals, businesses and decentralized applications (DApps) to earn staking rewards on anything above a minimum amount of 0.01 ETH using the Beacon Chain, without the need to maintain staking infrastructure. While centralized services such as Binance or Coinbase have benefits in terms of making staking a quick and easy option for beginners, using a centralized service provider comes at the price of handing over your custody of private keys and reduced rewards. Wow! Minipool slots in stage two of the Rocket Pool launch maxed out in less than a minute!
For those who missed out, stage 3 will kick off on 15 Nov 00:00 UTC.
The rETH deposit pool limit has increased so liquid staking is available… for now.Decentralized staking services like Rocket Pool (and other protocols such as Blox Staking and Stkr) use a trustless implementation for staking and don’t hold private user validator keys or withdrawal keys.Boyko-Romanovsky told Cointelegraph that Rocket Pool is an “amazing example of a decentralized solution for Ethereum.”

Bitcoin flippens Tesla and Facebook — Will Amazon be next?