Bitcoin is back above $50,000 and bulls are currently attempting to secure a daily close above the oft-disputed level. The strength of Bitcoin (BTC) has also helped to kickstart momentum in the altcoins and at the time of writing, several tokens are seeing gains in excess of 20%. 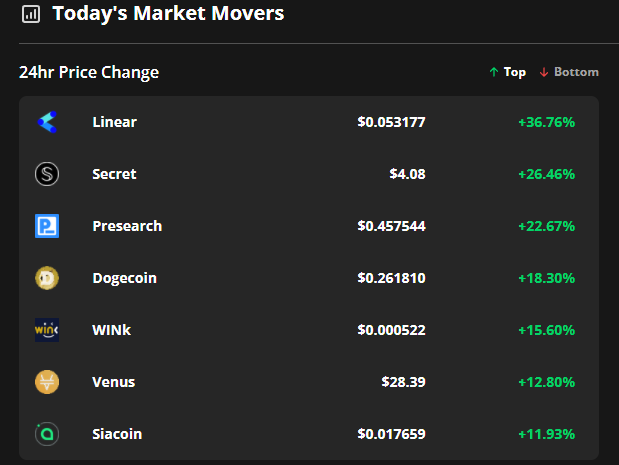 Data from Cointelegraph Markets Pro and TradingView shows that the biggest gainers over the past 24 hours were Linear (LINA), Secret (SCRT) and Presearch (PRE).

Linear is a decentralized delta-one asset protocol that is cross-chain compatible between the Ethereum network and the Binance Smart Chain (BSC). The network supports the creation, trading and management of liquid synthetic assets. According to data from Cointelegraph Markets Pro, market conditions for LINA have been favorable for some time. The VORTECS™ Score, exclusive to Cointelegraph, is an algorithmic comparison of historical and current market conditions derived from a combination of data points, including market sentiment, trading volume, recent price movements and Twitter activity. 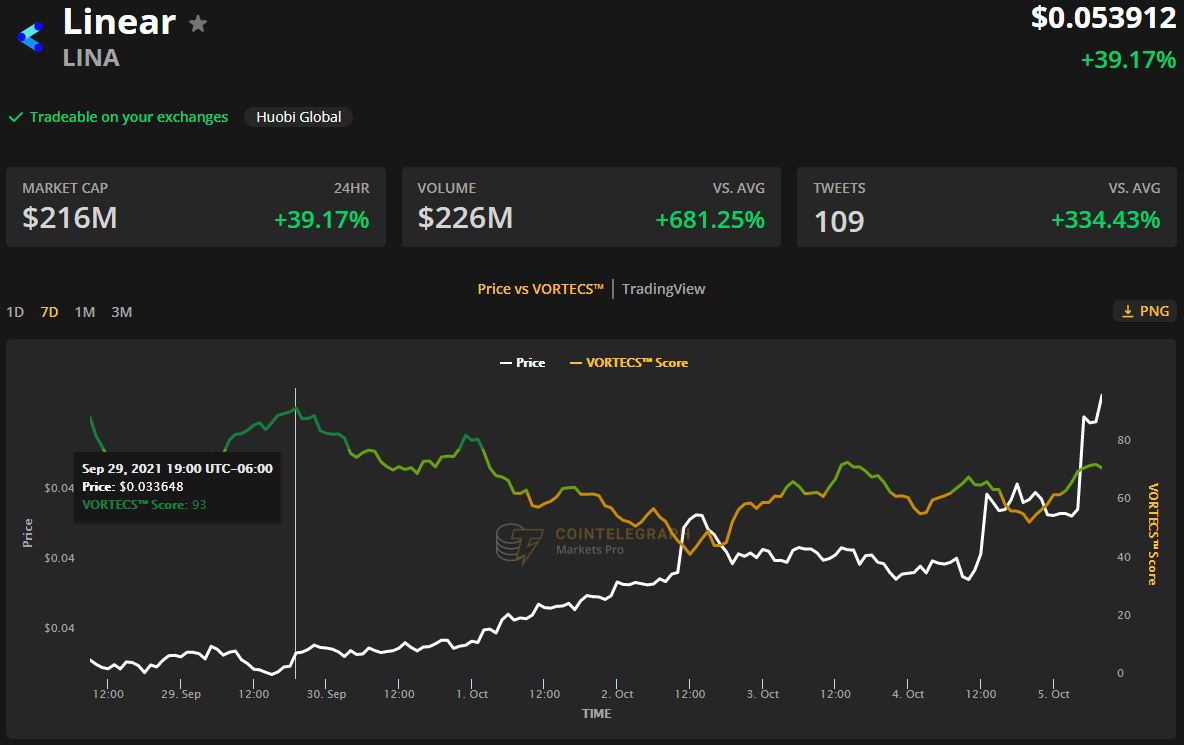 As seen in the chart above, the VORTECS™ Score for LINA climbed into the dark green zone on Sept. 29 and reached a high of 93 around 26 hours before the price began to increase 73% over the next four days.The spike in momentum comes after the project released additional details about the upcoming launch of Linear DAO, which will include a new governance model that supports community voting.

SCRT rallies ahead of its Supernova upgrade

SCRT is the native currency of the Secret Network, a blockchain protocol with built-in data privacy for smart contracts and decentralized applications that are permissionless and privacy-preserving. VORTECS™ data from Cointelegraph Markets Pro began to detect a bullish outlook for SCRT on Sept. 30, prior to the recent price rise. 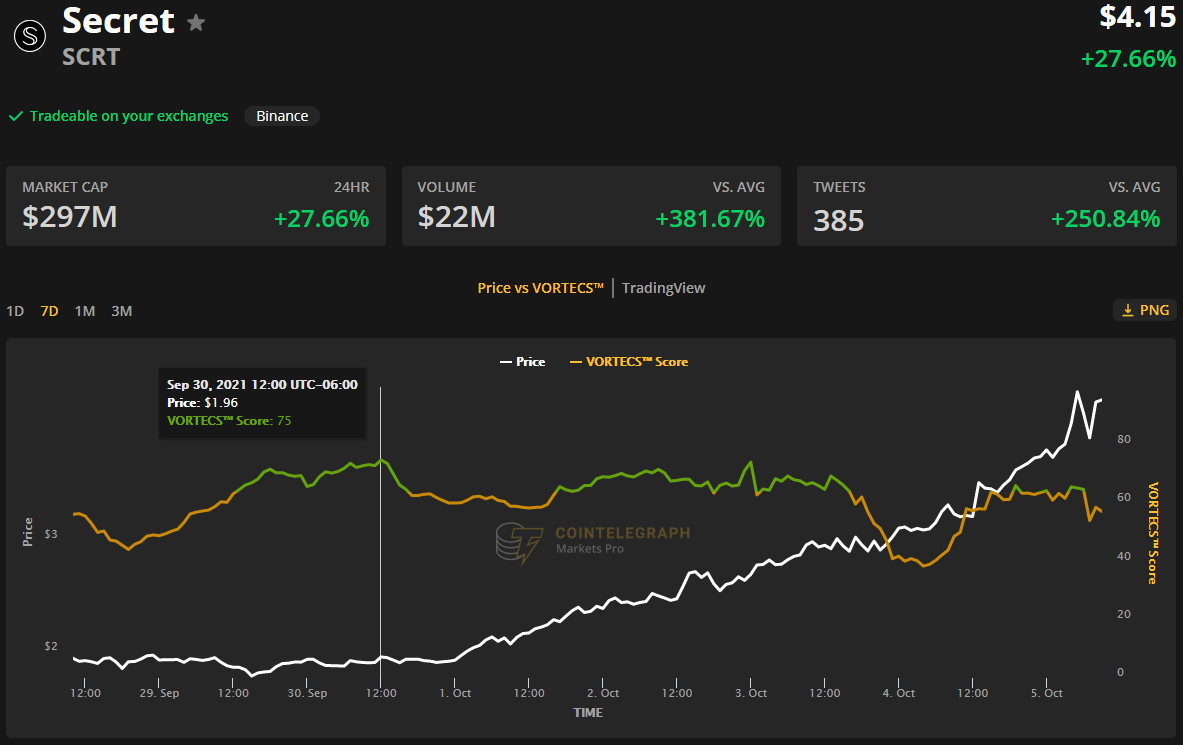 As seen in the chart above, the VORTECS™ Score for SCRT climbed into the green on Sept. 29 and reached a high of 75 on Sept. 30, around twelve hours before its price began to increase by 135% over the next five days. The surge in price for SCRT comes as the protocol prepares to undergo its Supernova protocol update, which will enable integration with the Cosmos Inter-Blockchain Communication (IBC) protocol.

Presearch is a blockchain-based decentralized search protocol that is community-driven and allows users to search privately and rewards users for their activity. VORTECS™ data from Cointelegraph Markets Pro began to detect a bullish outlook for PRE on Oct. 2, prior to the recent price rise. 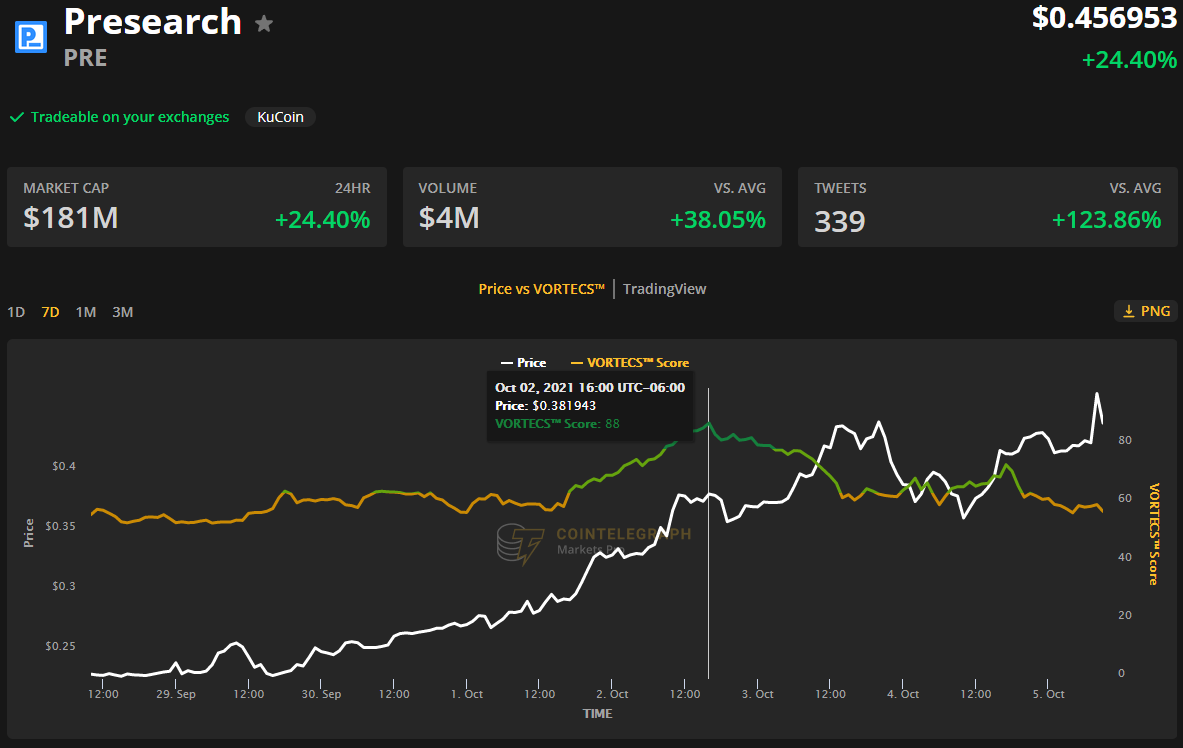 As seen in the chart above, the VORTECS™ Score for PRE climbed into the dark green zone on Oct. 2 and reached a high of 88 around three hours before its price began to increase by 50% over the next three days. The rally seen in the price of PRE comes as the project announced a partnership with CoinMarketCap, which will integrate its data feeds directly into the Presearch search engine. The overall cryptocurrency market cap now stands at $2.17 trillion and Bitcoin’s dominance rate is 43.1%.The views and opinions expressed here are solely those of the author and do not necessarily reflect the views of Cointelegraph.com. Every investment and trading move involves risk, you should conduct your own research when making a decision.

Bitcoin price is back at $50K, but exactly how 'bullish' are the bulls?