For NFL fans, 2021 was a great year. Stadiums returned to capacity crowds after the 2020 season was shortened with limited attendance. Stadium parking lots were again filled with the enthusiastic anticipation of tailgaters and their barbequed camaraderie. It was also a great year for Bitcoin (BTC) investors as the largest cryptocurrency by market capitalization reached all-time high prices multiple times throughout 2021, eventually topping out at $69,000 in early November. This led to a dramatic increase in media coverage of Bitcoin.Seven NFL players in 2021 decided to call the audible and begin either being paid in crypto or having their cash salary partially converted to crypto. These players have capitalized on the return of the regular season and the increased profitability of Bitcoin.

The reigning 2020 NFL MVP announced via a Nov. 1 video post on Twitter that he was partnering with Cash App payment service to accept a portion of his salary in Bitcoin. Rodgers will earn roughly $22.3 million this year.The video depicted Rodgers dressed as John Wick for a Halloween party. If that wasn’t strange enough, likely by design, Rodgers also told viewers that he would donate $1 million in BTC.

In Rodgers’ case, he will have a portion of his salary sent to his Cash App account, which he will then use to buy BTC. The Twitter profile for the star quarterback for the Green Bay Packers features a picture of himself on the field during a game with the iconic laser eyes, further signaling his support for BTC.

Tom Brady is another very high-profile NFL star quarterback who dabbled heavily in cryptocurrency in 2021. Brady has not yet said that he is being paid in BTC by the NFL, but he will be paid in crypto by FTX exchange after he took an equity stake in Sam Bankman-Fried’s exchange, and will serve as a brand ambassador.Brady has not reserved himself to crypto assets alone, however. The iconic football star launched his own NFT platform, called Autograph, in April to attract the top talent in sports, entertainment, fashion and pop culture. Tom Brady getting into Crypto was a top signal pic.twitter.com/hc6qxQou9oIt doesn’t end there for Brady and crypto, though. Late in October, Brady threw the 600th passing touchdown of his career, marking an all-time high for the NFL, and helping to secure Brady’s position as the all-time leading touchdown passer in the league’s history. Brady paid 1 BTC to the fan who was initially given the ball by the receiver who completed the touchdown.That BTC was worth about $62,000 at the time of the game, but the ball itself may be worth over $500,000 according to Goldin Auctions sports memorabilia auction company.

Odell Beckham Jr. (OBJ) followed in Aaron Rodgers’ footsteps by announcing late in November that he had partnered with Cash App to receive his salary from the NFL in BTC. His contract stipulates that he should receive about $4.25 million from the NFL this season.The Los Angeles Rams’ wide receiver told fans that he would give back $1 million in BTC as part of his new partnership with Cash App. Beckham appears to be no stranger to the crypto and NFT scene as his Twitter profile dons a Crypto Punk NFT. 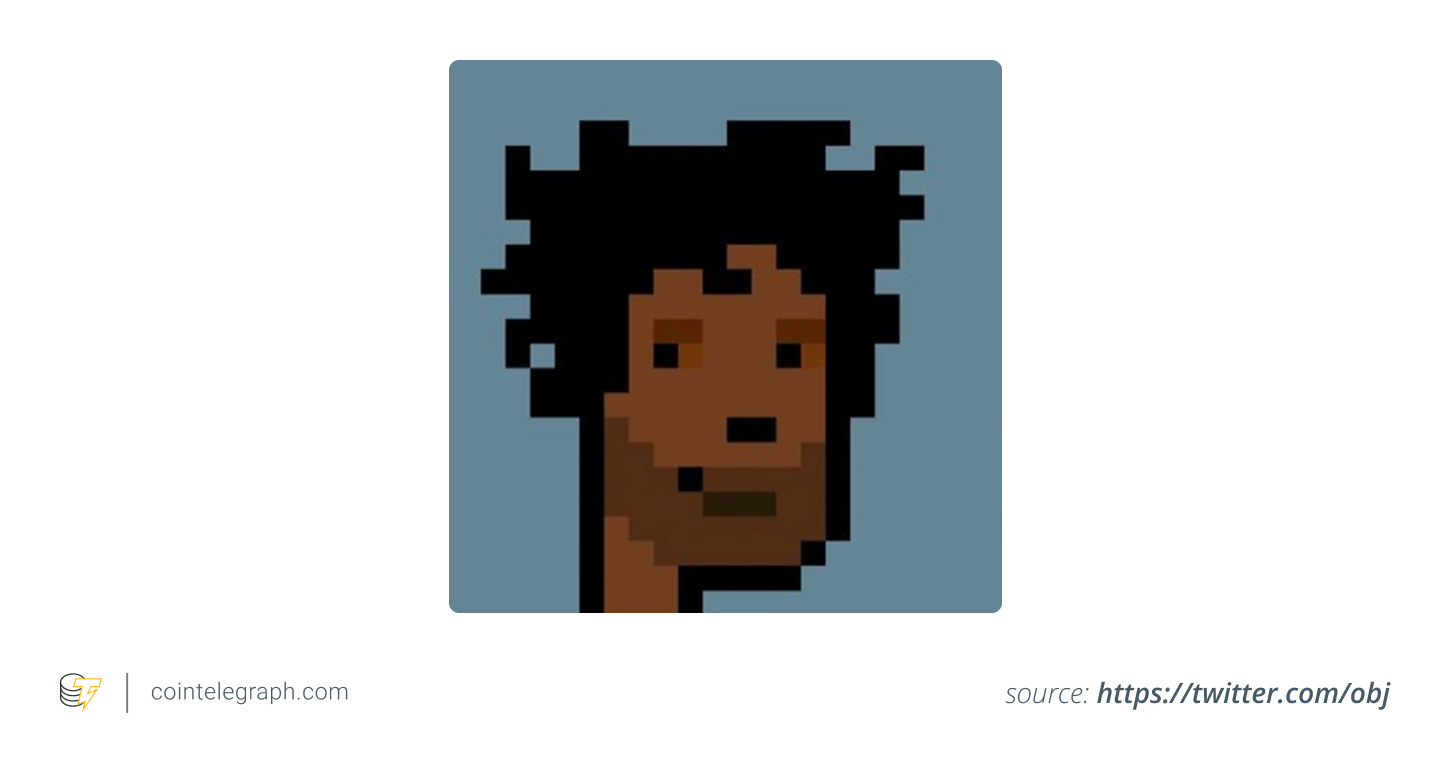 In case you haven’t noticed, Jack Dorsey’s Cash App is involved with both OBJ’s and Aaron Rodgers’ BTC salary deal. The payment service app has had a great 2021 through the first three quarters of the year by raking in nearly $10 billion in revenue from 36 million active users and 100 million downloads.

The Carolina Panthers’ new star quarterback joined the ranks of NFL superstars who are publicly accepting crypto payments. Lawrence’s deal, however, is not with the NFL directly. The 2021 NFL top draft pick’s crypto salary comes from an endorsement deal with the crypto portfolio app FTX (formerly Blockfolio). Congrats on being the #1 pick @Trevorlawrencee!

We’ve got a surprise for you — check your @blockfolio account for $25k of SOL.

Tonight is on crypto, thanks to you! pic.twitter.com/ci8yHp3e8WThe value of his deal has not been made public, but if Lawrence has been hodling his crypto earnings, there is a good chance he has enjoyed an appreciation in value, especially from the Solana (SOL) coins. The total crypto market cap has increased by about $500 billion since late April when the deal was announced.

Saquon Barkley, the superstar running back from the New York Giants, revealed in July that he was converting all of his endorsement pay into BTC. As with most others on this list, Barkley is not being paid directly with crypto. Instead, he is swapping some of his cash earnings for crypto.Barkley is using the Strike payment app to acquire his BTC. He is not the first NFL player to use Strike to buy BTC with his salary, however. Last year, former NFL offensive lineman Russel Okung became the first player to publicly share that he was using Strike to convert his NFL salary to BTC. 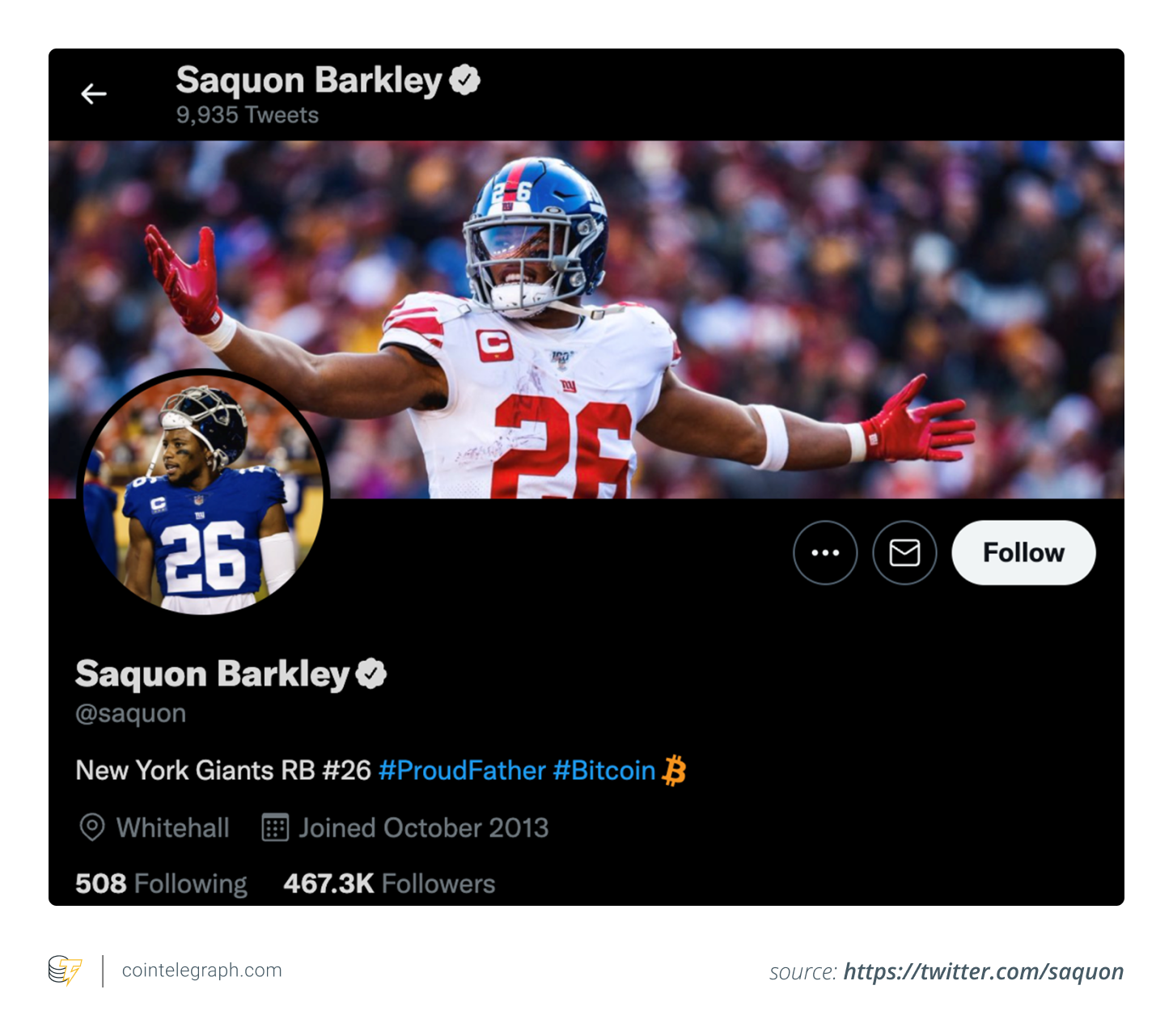 Barkley’s reasoning for trying to amass wealth with BTC revolved around the lack of longevity among NFL athletes. He told The Best Business Show host Anthony Pompliano on July 15:

Kansas City Chiefs’ tight end Sean Culkin went public with his plans to convert his entire salary from the NFL into BTC. While others on this list committed to converting only a portion of their salary into Bitcoin or being paid for endorsements with cryptos, Culkin is swapping 100% of his salary.I fully believe Bitcoin is the future of finance and I wanted to prove that I have real skin in the game — not just trying to make a quick buck. I will be converting my entire 2021 NFL salary to #Bitcoin.Like with Saquon Barkley, Culkin’s reasoning for turning to crypto has to do with the short half-life common among players in the league. The average time most athletes spend in the NFL is 3.3 years, according to Statista. Culkin said in a statement:

Last but certainly not least on the list of NFL stars earning crypto is the Green Bay Packers’ Aaron Jones. The running back signed a deal with FTX to become an ambassador for the exchange in September. Like with Tom Brady’s deal, Jones purchased an equity stake in the exchange.Jones will also integrate the FTX Pay platform into his own charity’s website to enable it to accept crypto donations. Got my first NFT Shout out to @MaisonDeGOAT thank you for welcoming me to the herd #GOATz
Excited to be apart of the community !!! pic.twitter.com/oLRquKjGRE

Digital rights management in the open seas of blockchain systems