This year has seen a number of high profile partnerships formed between the cryptocurrency sector and major sports leagues, teams and individual players. Nowadays players engage with their fans by issuing limited edition NFTs and other perks that are associated with crypto and blockchain technology. Crypto companies are also making their presence known stitching their names on jerseys, buying stadium naming rights and paying for cleverly placed primetime commercials between game breaks.One project that has seen a recent surge in interest thanks to its focus in the world of sports and helping fans interact with their favorite teams and players is Chiliz (CHZ), the blockchain network behind the Socios.com fan engagement platform.Data from Cointelegraph Markets Pro and TradingView shows that since hitting a low of $0.243 on Sept. 29 the price of CHZ spiked 171% to a daily high at $0.657 on Oct. 31 and recent developments are now pushing the price back towards the swing high. 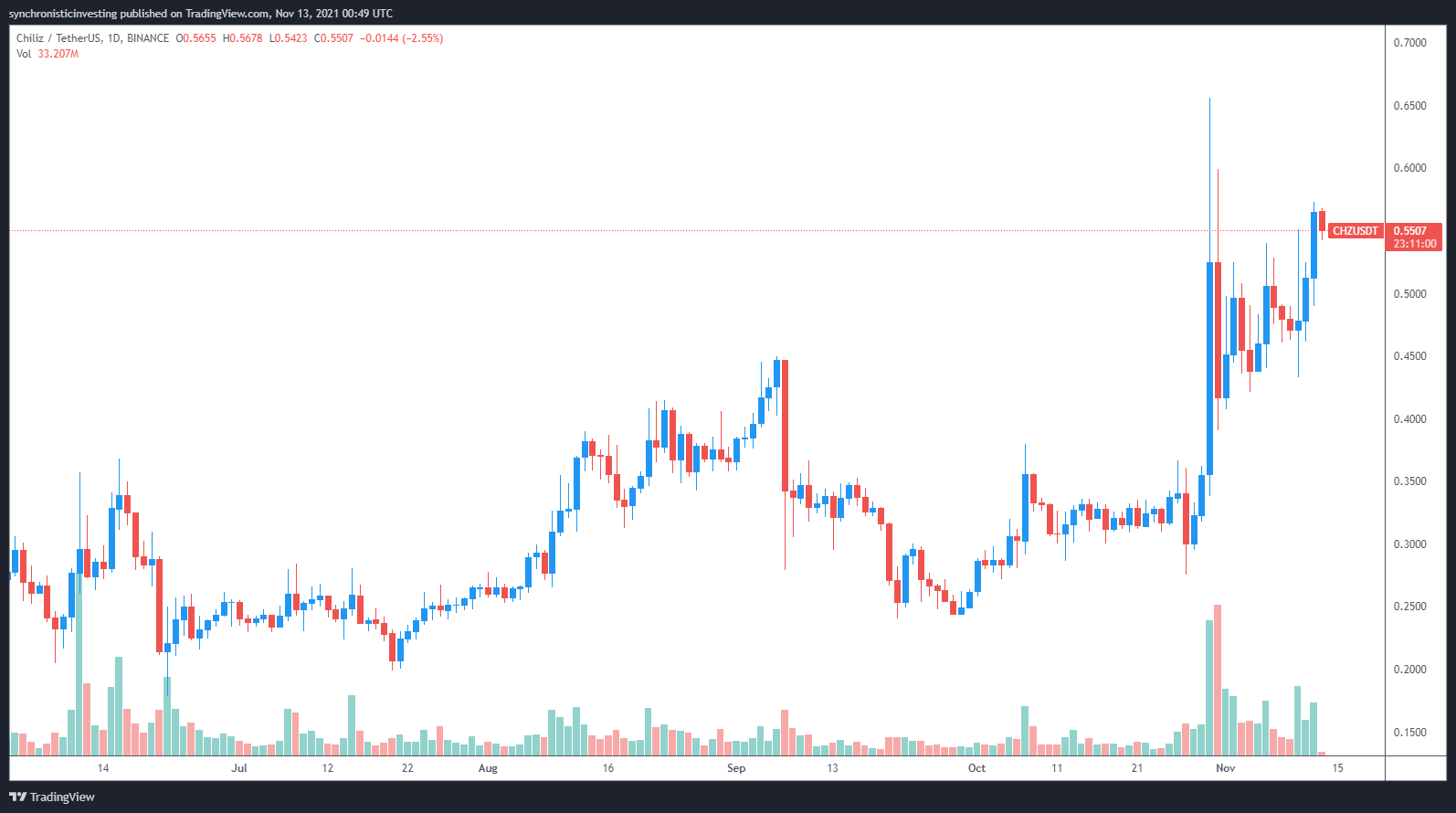 Three reasons for the growing strength of CHZ include the launch of live in-game NFTs, recent exchange listings for CHZ as well as its newly released fan tokens and the protocol’s rapidly expanding ecosystem of partners.

The development that kicked off the current rally was the rollout of the platform’s first live, in-game NFT drop which took place a match between A.C. Milan and A.S. Roma.This Sunday, history will be made as we release the first ever @acmilan NFT.

Here’s how you can be one of ONLY 100 to own one #ACMNFT | $ACM ⚡️ $CHZ pic.twitter.com/0z1aGyFgACWith this design, new NFTs are minted as they happen based on key moments in live matches and then they are dropped to the wallet of fan token holders who correctly predict the outcome of the game. The announcement that this new method of distributing NFTs was followed by a spike in demand for the token which has continued to build in the following weeks.

Another reason for the building momentum of CHZ has been the addition of new exchange listings, as well as its newly released fan tokens for clubs like São Paulo FC, AC Milan and Manchester City. Introducing Manchester City @ManCity Fan Token $CITY on Binance Launchpool! Farm $CITY by Staking #BNB, $CHZ and $BUSD Tokens

➡️ https://t.co/LvGgKeympQ pic.twitter.com/4V5OP63GFSIn addition to the listings, Binance is also allowing fans to earn tokens from their favorite teams by staking Binance Coin (BNB), Binance USD (BUSD) and CH. OKEx also announced that it will support tokens from the Chiliz ecosystem and CHZ appears to have benefited from a new listing eToro’s crypto exchange on Nov. 9.

Ecosystem expansion could be another recent development that is strengthening CHZ’s fundamentals. More than 80 sports properties announced partnerships with @chiliz x @socios, more than +100 already signed. While improving our product and starting to prepare a global marketing campaign, we focus on building a leading new fan ecosystem (engagement x monetization). #innovation pic.twitter.com/mZKOL6IyDHRecently, the platform unveiled a partnership with Kraft Sports and Entertainment which will see the National Football League’s (NFL) New England Patriots and Major League Soccer’s (MLS) New England Revolution join the Chiliz and Socios ecosystem. This partnership marks the first foray for Chiliz into the NFL and MLS and indicates that the protocol has its sights set on expanding to cover all major sports leagues where there is a demand from fans for more engagement. VORTECS™ data from Cointelegraph Markets Pro began to detect a bullish outlook for CHZ on Oct. 28, prior to the recent price rise. The VORTECS™ Score, exclusive to Cointelegraph, is an algorithmic comparison of historical and current market conditions derived from a combination of data points including market sentiment, trading volume, recent price movements and Twitter activity. 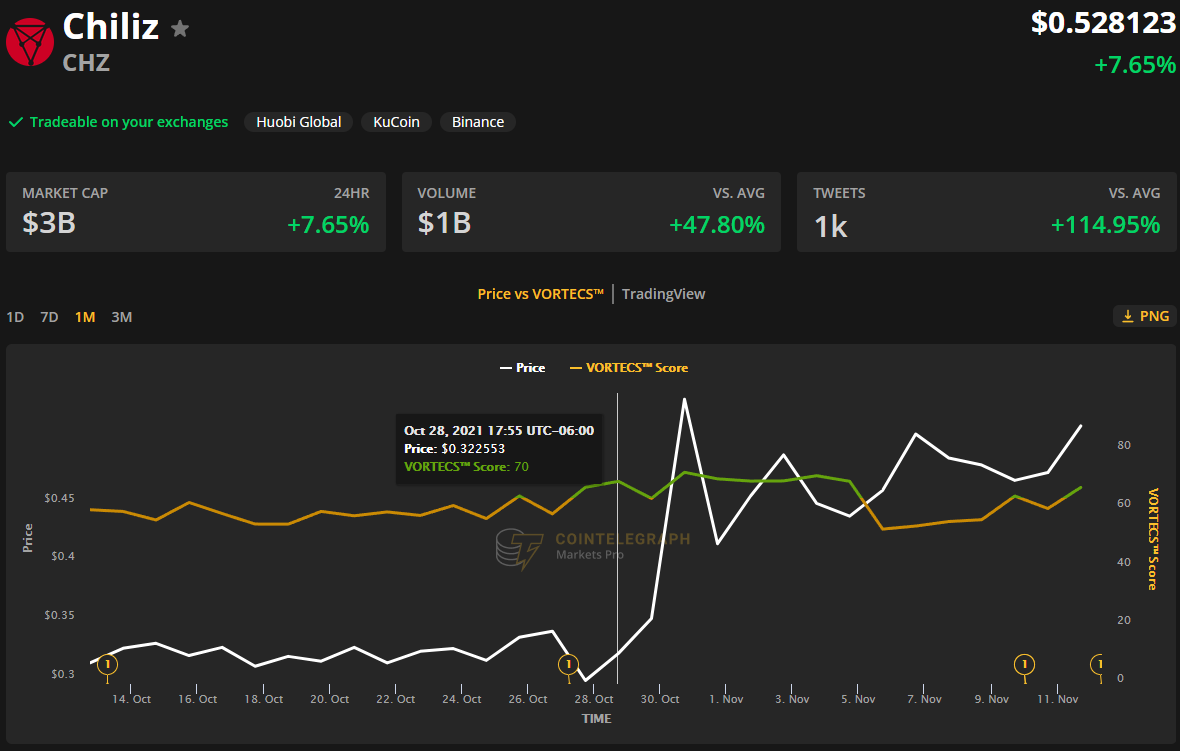 As seen in the chart above, the VORTECS™ Score for CHZ began to pick up on Oct. 27 and reached a high of 70 on Oct. 28, just as its price began to increase 125% over the next two weeks. The views and opinions expressed here are solely those of the author and do not necessarily reflect the views of Cointelegraph.com. Every investment and trading move involves risk, you should conduct your own research when making a decision.

MicroStrategy Falls With the Bitcoin It Holds; Breakeven Point Looms

Evolve or die: How smart contracts are shifting the crypto sector’s balance of power

Successful smart cities will be impossible without decentralized techs

Everyone’s in The Sandbox: Artists, brands and creators pile into the Metaverse