Looking at the Bitcoin (BTC) chart from a weekly or daily perspective presents a bearish outlook, and it’s clear that BTC’s price has been consistently making lower lows since hitting an all-time high at $69,000. 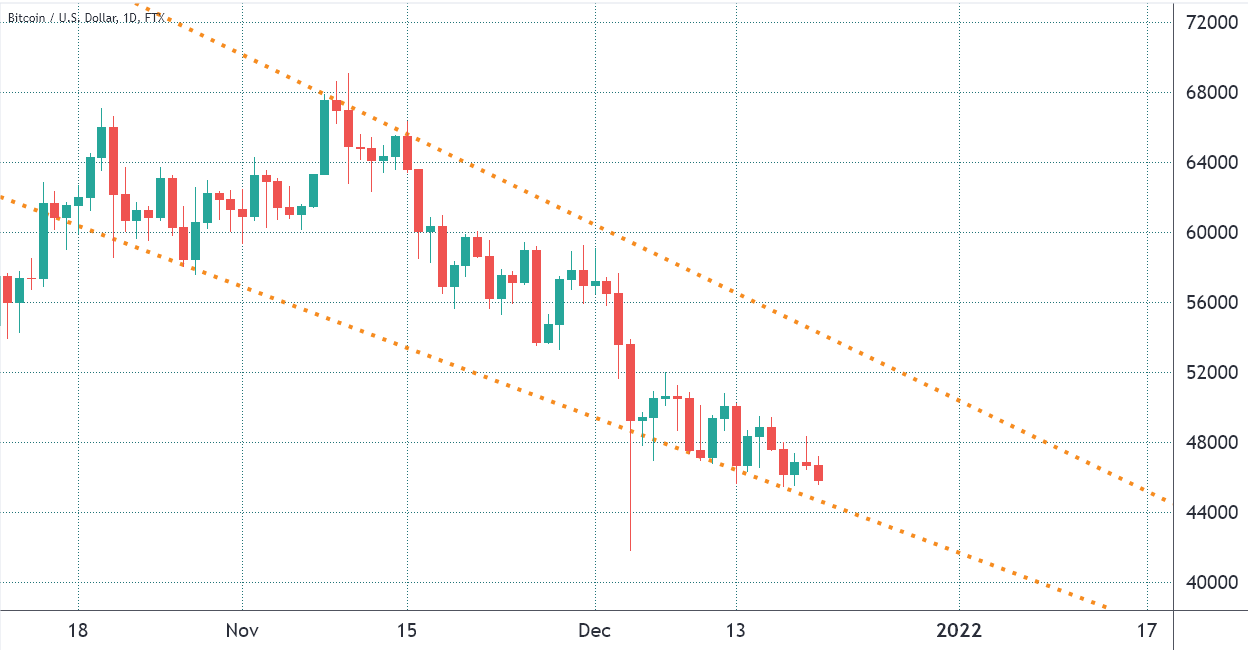 Curiously, the Nov. 10 price peak happened right as the United States announced that inflation had hit a 30-year high, but the mood quickly reversed after fears related to China-based real estate developer Evergrande defaulting on its loans. This appears to have impacted the broader market structure.

This initial corrective phase was quickly followed by relentless pressure from regulators and policymakers on stablecoin issuers. First came VanEck’s spot Bitcoin exchange-traded fund rejection by the U.S. Securities and Exchange Commission on Nov. 12. The denial was directly related to the views that Tether’s stablecoin, USDT, was insolvent and concerns over Bitcoin’s price manipulation.On Dec. 14, the U.S. Senate Banking, Housing and Urban Affairs Committee held a hearing on stablecoins focused on consumer protection and their risks, and on Dec. 17, the U.S. Financial Stability Oversight Council voiced its concern over stablecoin adoption and other digital assets. “The Council recommends that state and federal regulators review available regulations and tools that could be applied to digital assets,” said the report.The worsening mood from investors was reflected in the CME’s Bitcoin futures contracts premium. The metric measures the difference between longer-term futures contracts to the current spot price in regular markets. Whenever this indicator fades or turns negative, this is an alarming red flag. This situation is also known as backwardation and indicates that bearish sentiment is present. 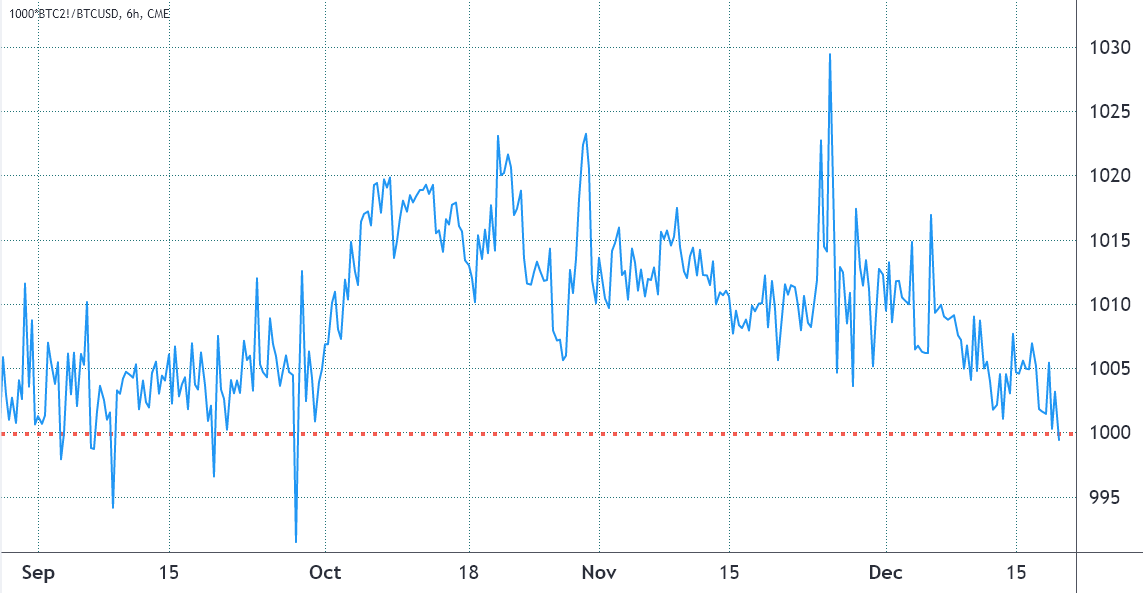 These fixed-month contracts usually trade at a slight premium, indicating that sellers are requesting more money to withhold settlement for longer. Futures should trade at a 0.5%–2% annualized premium in healthy markets, a situation known as contango.Notice how the indicator moved below the “neutral” range after Dec. 9 as Bitcoin traded below $49,000. This shows that institutional traders are displaying a lack of confidence, although it is not yet a bearish structure.

Exchange-provided data highlights traders’ long-to-short net positioning. By analyzing every client’s position on the spot, perpetual and futures contracts, one can better understand whether professional traders are leaning bullish or bearish.There are occasional discrepancies in the methodologies between different exchanges, so viewers should monitor changes instead of absolute figures. 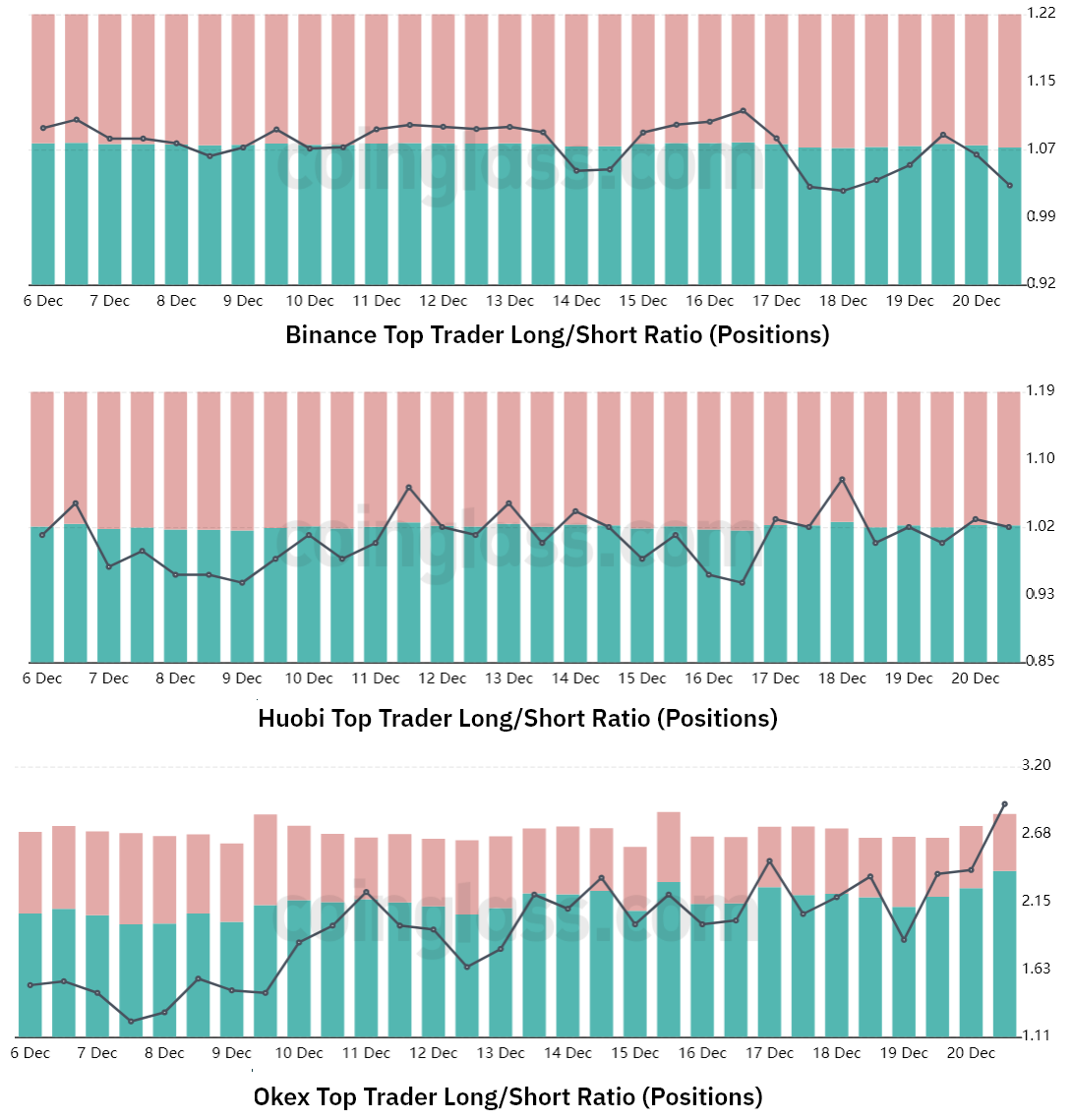 Despite Bitcoin’s 19% correction since Dec. 3, top traders on Binance, Huobi and OKEx have increased their leverage longs. To be more precise, Binance was the only exchange facing a modest reduction in the top traders’ long-to-short ratio. The figure moved from 1.09 to 1.03. However, this impact was more than compensated by OKEx traders increasing their bullish bets from 1.51 to 2.91 in two weeks.Related: SEC commissioner Elad Roisman will leave by end of JanuaryThe lack of a premium in CME two-month future contracts should not be considered a “red alert” because Bitcoin is currently testing the $46,000 resistance, its lowest daily close since Oct. 1. Furthermore, top traders on derivatives exchanges have increased their longs despite the price drop.Regulatory pressure probably won’t lift up in the short term, but at the same time, there’s not much that the U.S. government can do to suppress stablecoin issuance and transactions. These companies can move outside of the U.S. and operate using dollar-denominated bonds and assets instead of cash. For this reason, currently, there is hardly a sense of panic present in the market, and according to the data, pro traders are buying the dip.The views and opinions expressed here are solely those of the author and do not necessarily reflect the views of Cointelegraph. Every investment and trading move involves risk. You should conduct your own research when making a decision.

The biggest winners and losers of the crypto industry in 2021

Tim Cook says he bought crypto, but rejects Apple adding it to its portfolio… for now