A popular cryptocurrency trader under the Twitter pseudonym “Sicarious” donated a portion of their crypto profits to buy Christmas presents and other utilities for underprivileged children.The donations included $7,250 worth of livestock, clean water, Bibles and emergency food for Compassion International, a child sponsorship nonprofit, and another $1,500 to purchase and donate toys for kids — who would otherwise do without at Christmas — via the Toys for Tots Foundation.

Sicarious also shared the screenshot of their profits and loss statements that showed that they had made nearly $6,500 and $27,500 in gains by shorting the recent price drops of Terra’s LUNA and Avalanche’s AVAX, respectively. That left the trader with enough leftover profits to continue their donation spree until the end of this year.Walmart is going to need more LEGOs… pic.twitter.com/k5X19VxOZoIn detail, Sicarious announced on Dec. 5 that they would donate any profits made until the end of 2021 for children-related causes as a part of a so-called “Christmas challenge.” In announcing so, the anonymous trader put $100,000 into their FTX account, adding that if they nuke the amount, they would still donate whatever they can afford.

On Dec. 15, Sicarious closed another AVAX short in profit and used about $2,000 worth of proceeds to benefit a local food pantry.The trader’s initiative also inspired others to commit their realized crypto profits to causes. For instance, another Twitter user, “Aeroplaine” claims to have deposited $50,000 into a dYdX perpetual exchange account, stating that they would donate all the gains to charitable causes in Malaysia.

While Sicarious’s citizenship remains unclear, the copies of the traders’ bills and mention of the retail store Walmart in their tweets indicate that they live in the United States, a country with some of the most stringent crypto tax laws.The U.S. Internal Revenue Services classifies cryptocurrencies as property, meaning if one’s crypto investments increase in value, they would need to pay a capital gain tax when they spend it. That also means keeping a tax record in check on a $2 coffee bill if paid via crypto.But donating crypto to charity somewhat allows taxpayers to brush off the IRS’ tax-filing process. And since donations, on the whole, are not taxable events, one can offload their crypto profits as donations and deduct the same amount from their net tax liabilities in the financial year.But there remains a big takeaway on whether to first secure the crypto profits in cash and then donate or to pledge the money in crypto.The Giving Block, a crypto donation service, provided an answer back in 2020. The firm noted that cashing out crypto first would leave traders with higher capital tax liabilities, while donating directly via crypto would mean no tax responsibilities for the donor. 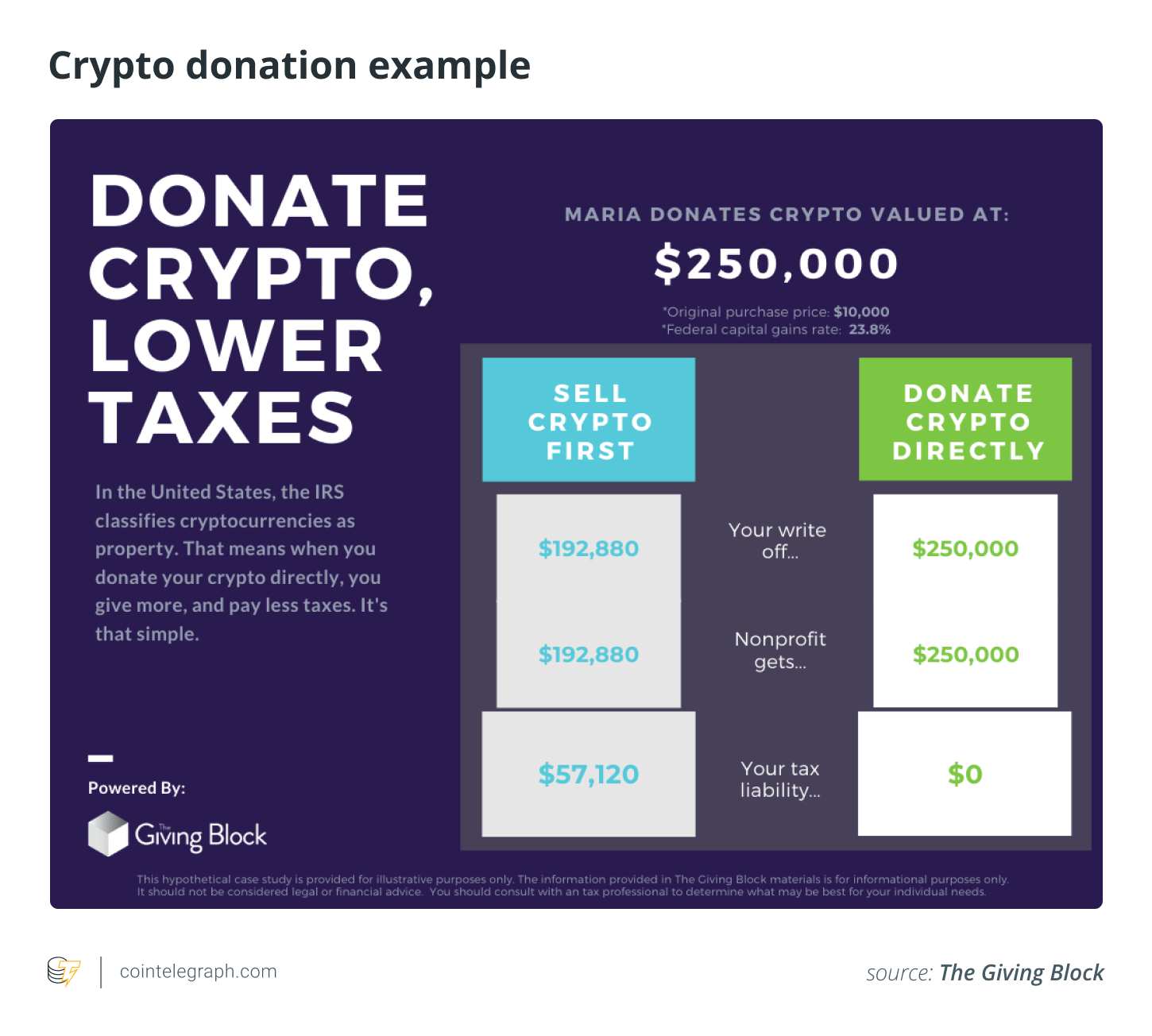 The direct-crypto-donation strategy seems to have worked well so far. For instance, Fidelity Charitable, the U.S.’ largest grantmaker, received over $274 million in cryptocurrencies this year, according to a company spokesperson quoted in the Los Angeles Times. Related: The Giving Block raises $2.4M for charity on ‘CryptoGivingTuesday’The amount came out to be almost four times higher than 2017’s peak of $69 million.Engiven, a crypto-enabled donation platform, also reported last month that it processed a $10 million Bitcoin (BTC) donation to a faith-based organization.The views and opinions expressed here are solely those of the author and do not necessarily reflect the views of Cointelegraph.com. Every investment and trading move involves risk, you should conduct your own research when making a decision.

Crypto in the House: Execs on the march, US partisan politics and Web3

This platform turns data into cryptocurrency