Bitcoin (BTC), the original cryptocurrency that started it all and even today continues to drive the market sentiments, has faced numerous challenges along the way. The latest challenge seems to be around its mining consensus, proof-of-work (PoW) and its consequent impact on the environment.Bitcoin network’s high energy consumption was one of the hottest topics last year, with the likes of Elon Musk fueling the sentiment that BTC in its current form is bad for the environment. Luckily enough, the mining companies for some time have been exploring the use of renewable energy, and the latest reports suggest that 58% of the BTC network’s energy comes from renewable sources.In 2022, the debate seems to have shifted from clean energy usage to a complete change in mining consensus, with a lobby composed of billionaires and proof-of-stake (PoS) proponents calling for a change in the code of Bitcoin. The sentiment is also fueled by Ethereum’s change from PoW to proof-of-stake, slated to be completed by the end of 2022.PoW is the original crypto mining consensus that was popularized by Bitcoin and adopted by several early crypto projects. PoS came into existence with the launch of Peercoin in 2013, and although not very popular at first, scalability and energy efficiency made it a popular choice for new crypto projects. William Szamosszegi, CEO of Bitcoin mining platform Sazmining, told Cointelegraph that “the fundamental mistake that Greenpeace, Larsen, and other critics of Bitcoin’s energy consumption make is that they judge Bitcoin by its ‘ingredients,’ rather than its value proposition.” He further added:Recently, Bitcoin Mining Council (BMC) responded to a letter sent to the United States Environmental Protection Agency (EPA) clearing that proof-of-stake and proof-of-work are qualitatively different. Thus, it’s misleading to refer to proof-of-stake as a more “efficient” form of proof-of-work, since it does not achieve the same thing.

PoW is touted as the most reliable method of reaching consensus on a blockchain. It aids in the decentralization of transactions while removing intermediaries and assuring transaction validity. The mining consensus offers equal opportunity to everyone and new miners are incentivized to add more hardware and spend more energy to receive their share of the mining rewards.PoS, on the other hand, uses a staking system where a certain amount of capital in the form of the network’s tokens is required to become a validator. Its security is meant to be derived directly from the perceived economic value of the network or how expensive it is to purchase a majority stake.While a lot is made out of Bitcoin’s energy consumption, which is definitely on the higher side when compared to other crypto projects, crypto naysayers often see the energy consumption as an independent metric. Meanwhile, Bitcoin’s energy consumption is directly proportional to its security, making it truly decentralized.A lot of efforts are being made to turn Bitcoin mining greener even in its current form, however. According to a study by Galaxy Digital, the Bitcoin network consumes nearly half of the energy used by banks and gold mining. 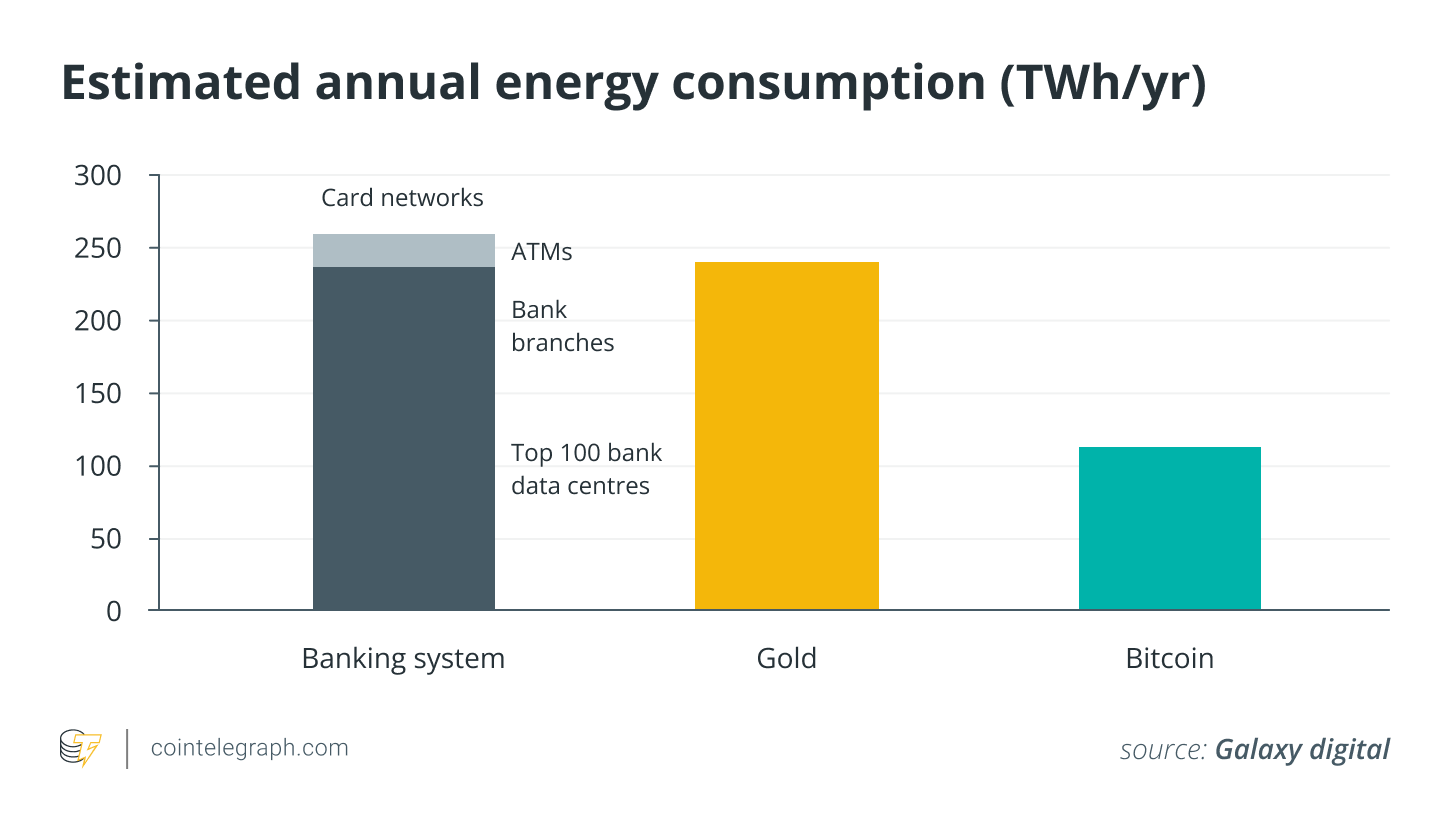 Critics often assume that the energy used by Bitcoin miners is either stolen from more productive use cases or results in increased energy consumption. However, research studies have shown that Bitcoin miners utilize nonrival energy that may otherwise be wasted or underutilized.Demand for changes to the core principles of the Bitcoin network is nothing new. During the Bitcoin block size war from 2015-2017, many exchanges and miners supported a Bitcoin hard fork but the Bitcoin community fought back to keep the network true to its value, as created by Satoshi Nakamoto himself. Joe Burnett, mining analyst at Blockware Solutions, believes that any attempt to change Bitcoin’s consensus algorithm “will certainly fail,” telling Cointelegraph:Looking back at some of the forks from 2018, when the block size debate was at its peak, gives a true picture of why Bitcoin shouldn’t alter its codes. The two blockchain networks that came out during the “block size war” were Bitcoin Cash (BCH) and Bitcoin SV (BSV). Both the networks have faced significant centralization and security issues and development on these networks has declined over time.

Another prominent endorsement of the PoW mining consensus is the Chinese mining ban last year. China contributed more than 60% of the Bitcoin mining power, but the blanket ban led to a complete shutdown, as miners had to cease their operations. The Bitcoin network hashing power declined overnight by more than 50%. Within a couple of months, however, the mining strength was back to pre-ban levels, showing the true power of decentralization.

The biggest argument in favor of PoS is its energy efficiency and scalability. However, those advantages come at the cost of decentralization — the founding principle of cryptocurrencies. For example, Bitcoin was created with a principle of equality, promising to offer equal opportunity to anyone looking to participate. However, PoS creates a staking barrier where the highest staker has the first say in the decision-making process.

While it is true that PoS verification is less energy-intensive than the PoW system currently in place, there are fundamental roadblocks with the PoS model that significantly lower the chances of Bitcoin altering its consensus mechanism any time soon. One of the major concerns with PoS networks is the level of centralization and its subsequent impact on the security of the network. Noble Drakoln, podcast host of Accredited Investor Journal, told Cointelegraph that “PoS networks might be ‘environment friendly’ but they are not decentralized.”This is evident from several protocol breaches on several PoS-based decentralized finance protocols and nonfungible token (NFT) games. Even the biggest PoS network such as Solana, which has seen a significant rise in adoption, has faced numerous outages over the past year. Most of the outages were caused by distributed denial of service (DDoS) attacks, resulting in a loss of consensus among validators.Related: ​​Everything gets politicized, including crypto, says former POTUS candidate Andrew YangEther (ETH), the second-largest cryptocurrency by market cap, has decided to switch to PoS to resolve scalability issues on its platform. The transition, however, has been delayed on numerous occasions and even a switch to PoS won’t guarantee seamless working. Drakoln explained further:The need for consensus mechanisms is to not only secure the network but allow for scalability. Ether, for example, has different use cases in comparison to Bitcoin and needed to scale differently as a result, leading to Eth2 adopting PoS moving forward. Bitcoin, on the other hand, only needs to process the transactions on the network allowing for PoW to build toward maximum network security while leveraging layer-2 applications such as the Lightning Network or Stacks to make up for that scalability as the mining aspect moves toward more energy-efficient options.

People want to be paid crypto to exercise in the Metaverse: Survey