Ethereum’s native token, Ether (ETH), could see yet another strong rebound in the sessions ahead as its price falls into a trading zone with a recent history of attracting buyers.The rising trendline has been triggering ETH’s price rebounds since the beginning of October and comes as a part of a broader ascending channel range.

As a result, Ether’s path of least resistance has been to the upside despite pullbacks at the channel’s upper trendline, with its quarter-to-date returns currently sitting at over 38%.Most recently, the rising trendline was instrumental in limiting sell-offs that followed Ether’s rally to a new record high above $4,870. That prompted analysts to expect another strong price rebound in the future, with a “swing long” setup posted by Forexn1 on TradingView calling for a bull run to $5,000.

MacroCRG, a Twitter-based independent market analyst, said Ether “has to bounce” as it manages to hold the rising trendline as support following the latest price pullback. Meanwhile, another analyst, Pentoshi, also anticipated a rebound but discussed the prospects of corrections below the rising trendline. In a Nov. 12 tweet, he stated:Pentoshi’s downside target in the event of extended price correction was near $4,000, as shown in the chart below. 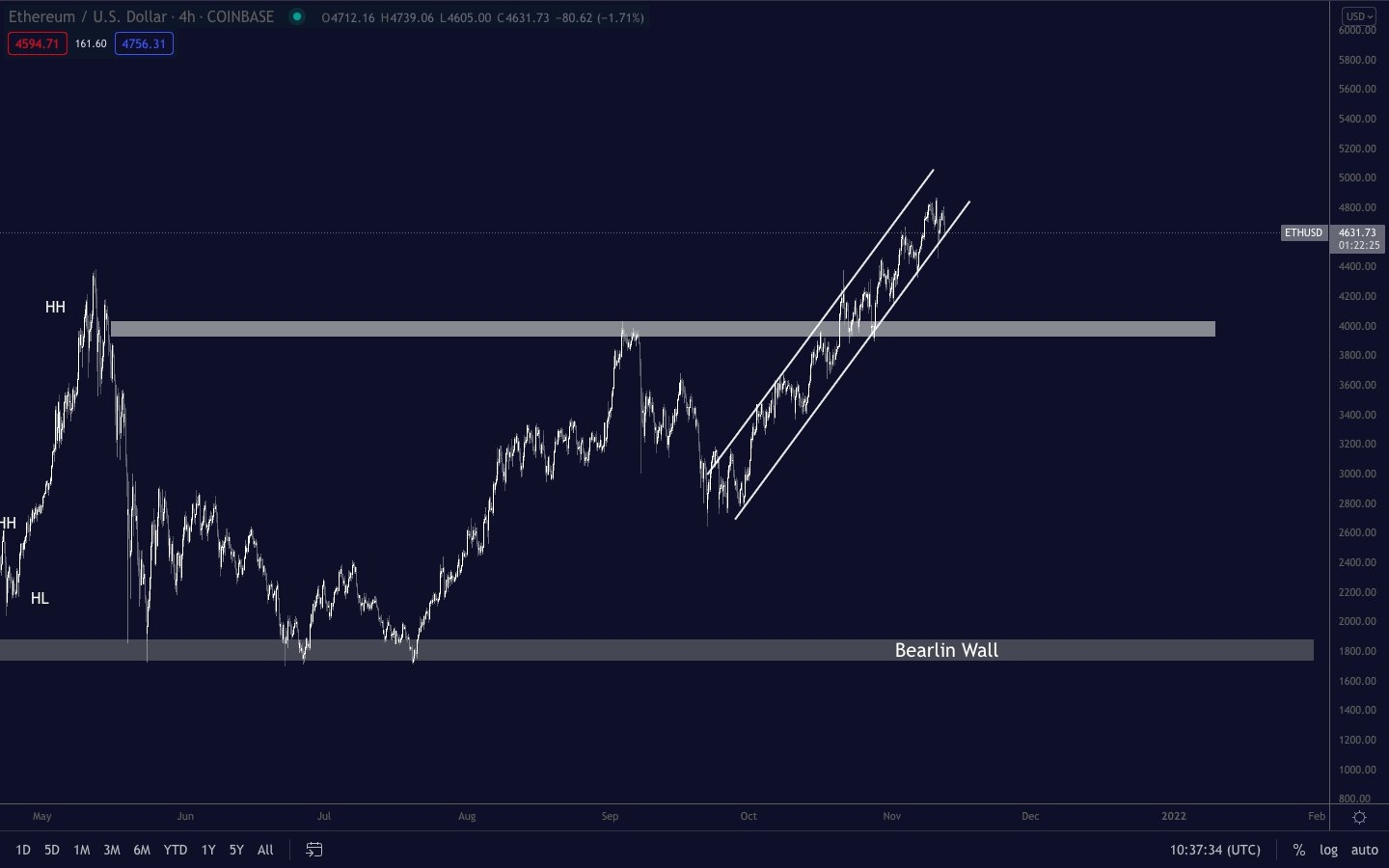 Ether’s ability to limit price corrections and — atop that — form new highs appears to have more than just technical factors behind it. Chris Weston, head of research at Pepperstone Financial Pty, cited fears of high inflation as the common denominator that has boosted demand for potential hedging assets across the crypto market, leading to Ether’s 500-plus percent and Bitcoin’s 130-plus percent price rallies in 2021.To investors, “Crypto is where the fast money is at,” Weston said in a note.Additionally, Mike McGlone, senior commodity strategist at Bloomberg Index, last week said he expects a $5,000 price for Ether, saying that investment “portfolios of some combination of gold and bonds appear increasingly naked without some Bitcoin and Ethereum joining the mix.”Three #Crypto Musketeers Driving $3 Trillion Market Cap – Representing a better way to transact, a strengthening ecosystem and here-to-stay asset class, #cryptodollars are the most significant advancing part of the digital-money revolution and the third leg of the crypto stool. pic.twitter.com/qhEOXttPW8The analyst cited declining supply as a major bullish backstop for Ether. Namely, Ethereum’s software upgrade in August, dubbed the London hard fork, implemented a code-change that started burning a portion of gas fees paid to miners via ETH, effectively reducing the supply. Related: Ascending channel pattern and Ethereum options data back traders’ $5K ETH targetThe upgrade has resulted in the removal of over 860,500 ETH — now worth over $3.2 billion — since implementation, according to data provided by Ultrasound.money. At the current rate, the Ethereum network expects to burn 5.3 million ETH every year versus 5.4 million ETH issued.

McGlone noted that a declining supply rate would keep Ether on its bullish course against rising demand:The views and opinions expressed here are solely those of the author and do not necessarily reflect the views of Cointelegraph. Every investment and trading move involves risk, and you should conduct your own research when making a decision.