FIL, the native crypto asset of the Filecoin network, was among the best performing digital assets Friday as it maintained its gains against a very bearish cryptocurrency market.The FIL/USD reached an intraday high of $102.109 at around 3:00 am UTC — up more than 37% on a 24-hour adjusted timeframe. The pair underwent a sharp correction later on profit-taking sentiment but sustained its 24-hour gains by staying upward of 17%. In contrast, Filecoin’s top rivals Bitcoin (BTC) and Ether (ETH) were down more than 6% and 7%, respectively, as of 9:45 am UTC. 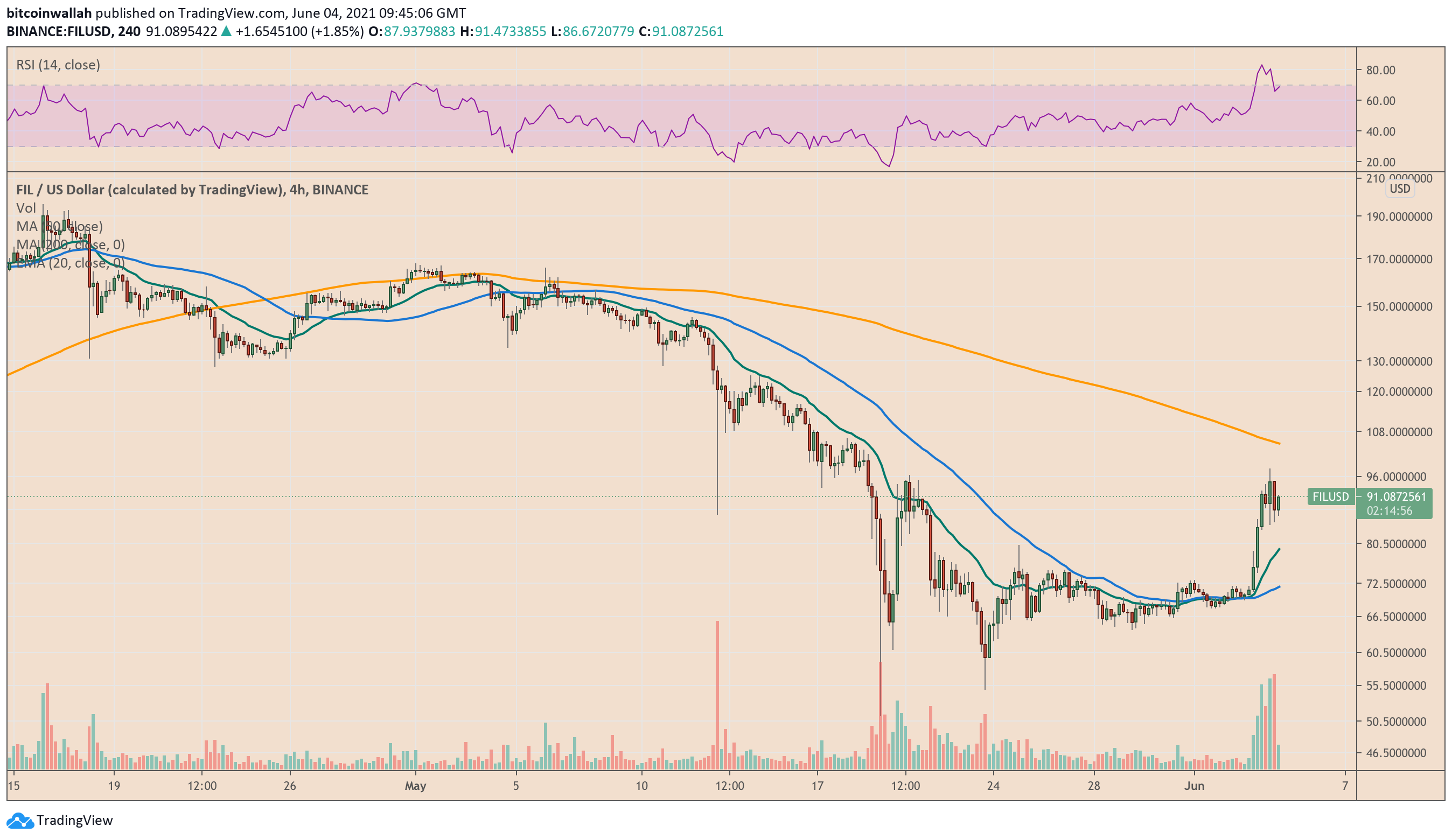 Almost all the top-cap digital assets posted losses after Elon Musk, CEO of Tesla, tweeted a cryptic breakup meme with a hashtag #Bitcoin and a broken heart emoji. According to the firm’s securities filing released in February, Tesla had added $1.5 billion worth of BTC to its balance sheet. However, Musk’s mysterious tweet on Thursday night raised fears that Tesla was going to or has already unloaded its entire Bitcoin investment.And you didn’t sell, right?Bitcoin dropped from around $39,500 to as low as $36,250 within a day. Meanwhile, the assets that remain positively correlated to the benchmark cryptocurrency also plunged in tandem. That included the second-largest cryptocurrency Ether, followed by its top-most rivals Binance Coin (BNB), Cardano (ADA) and even Musk’s favorite Dogecoin (DOGE). 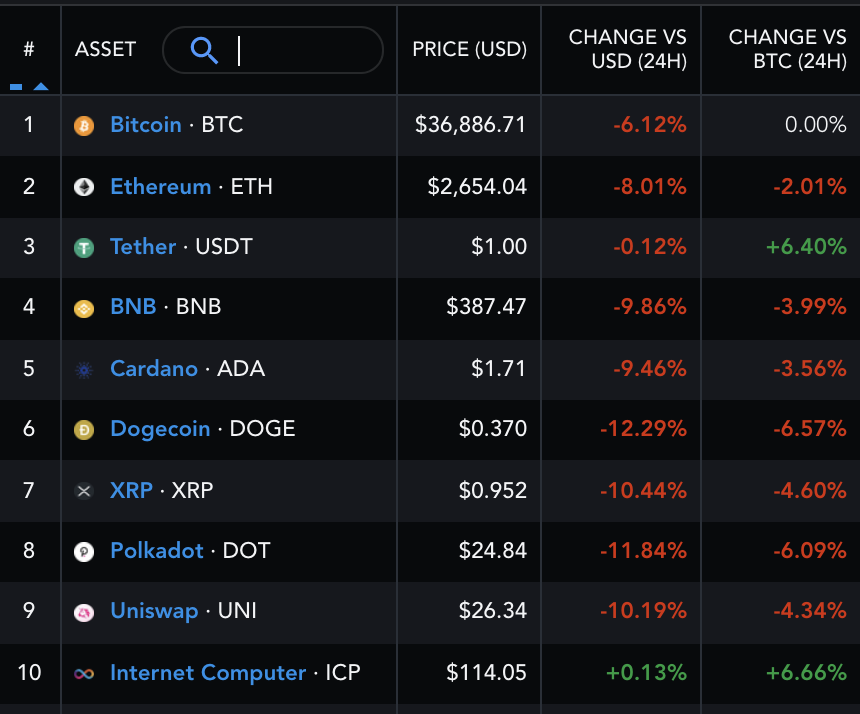 On the whole, the cryptocurrency market capitalization lost more than $128 billion in the previous 24 hours.

Why did Filecoin survive the bloodbath?

No major event took place in Filecoin’s decentralized file storage ecosystem this week. The last major announcement from the project’s team came on May 27, wherein it revealed “HyperDrive Network Upgrade” that proposes to boost its storage onboarding rate by 10–25 times than the current rate.Filecoin traders ignored the said update — the FIL/USD exchange rate plunged 4.36% on May 27 and 6.45% in the next session. Meanwhile, the pair traded choppily between May 20 and Wednesday in a tightening consolidation range, even as other tokens logged wild intraday price fluctuations. 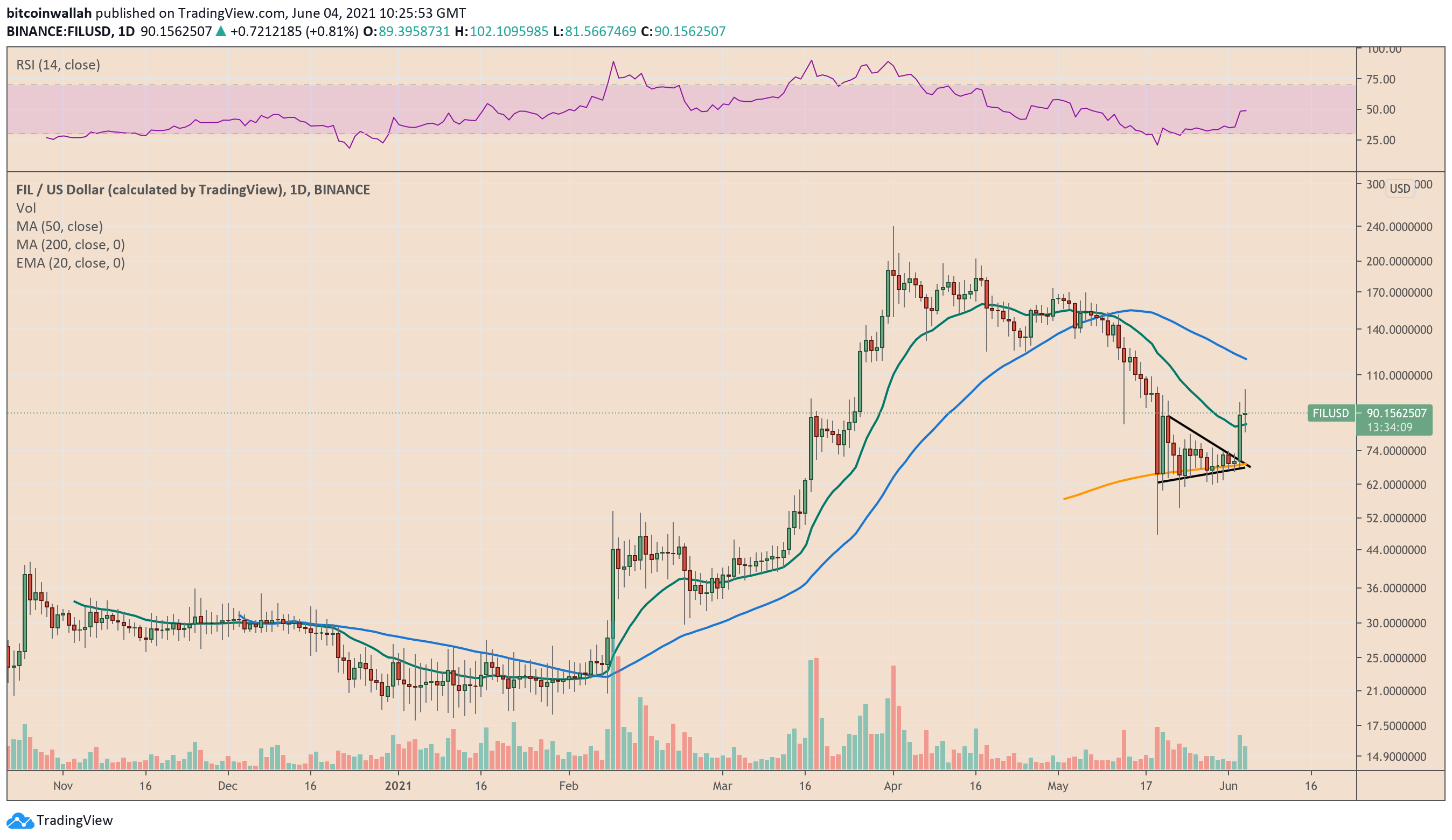 Filecoin’s under-performance against rival tokens also pushed its Relative Strength Index (RSI), a technical indicator to measure an asset’s price momentum, just near oversold territory. Traders typically increase their exposure in the assets that appear undervalued per the RSI readings — below 30. FIL/USD’s RSI was 35.96 before its latest price jump.So, it appears Filecoin attracted traders owing to its perceivable undervaluation compared to other top digital assets. That provided a short-term hedge to traders attempting to offset their risks against the Musk-led crypto market decline.$FIL (USDT) flexing relative strength to market pic.twitter.com/Wsueca6biUFIL also displayed a similar strength against Bitcoin. The FIL/BTC exchange rate jumped by nearly 40% after opening the Thursday session at 18,286 sats. The pair corrected lower by around 8.25% in the early London session Friday. Still, they maintained intraday profits, showing that traders were in no hurry to go back to Bitcoin.Strong volume spikes on both FIL/USD and FIL/BTC charts also indicated a renewed interest in the trading instruments.

It's Mati Greenspan versus the Maxis at ‘Shitshow’ 2021

Goldman’s Crypto Chief Worries About Fraud, but Not Cryptocurrency’s Future