After celebrating its 20th anniversary in January, the free internet encyclopedia Wikipedia continues making history by selling its first nonfungible token (NFT) via auction giant Christie’s.On Wednesday, Christie’s completed an auction of two Wikipedia-related objects directly from Wikipedia co-founder Jimmy Wales.Titled “The Birth of Wikipedia,” the online sale included two lots, an NFT of Wikipedia’s first edit, which sold for $750,000, and a Strawberry iMac used by Wales to create Wikipedia, which sold for $187,500. 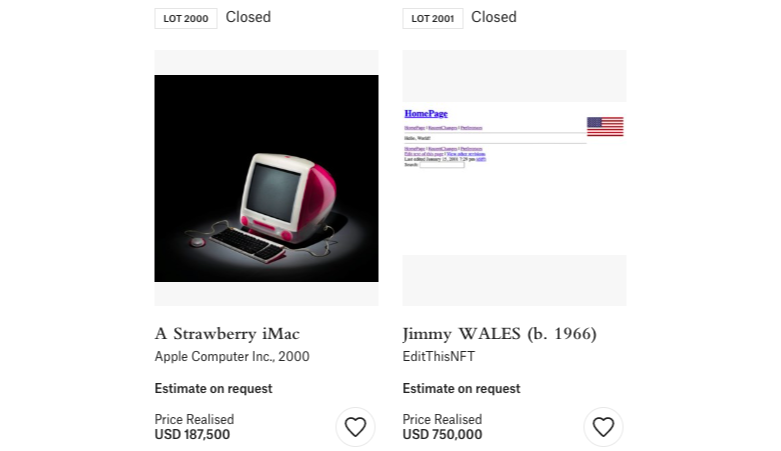 The NFT lot features the first message posted on Wikipedia by the site’s co-founder back in 2001, marking a unique moment in the history of the internet: Wales typed the words “Hello, World!” after launching the site on Jan. 15, 2001.The NFT preserves the layout of the Wikipedia home page in 2001, based on the earliest surviving source code. The NFT also has a feature that allows the owner to edit the page, which can be reset with a timer to revert to its original state.Christie’s senior specialist Peter Klarnet said that the auction’s result “underscores the burgeoning interest in the history of the internet among collectors.” According to the auction house, ​​Wikipedia will use a part of the sale proceeds to support Wales’ alternative social media network pilot project, WT.Social.One of the world’s largest auction houses, Christie’s moved into the NFT industry in early 2021, announcing the auction of its first-ever “purely digital work of art” by digital artist Beeple in February. Beeple’s NFT piece “Everydays: The First 5000 Days” sold for more than $69 million in March, emerging as one of the world’s most expensive NFTs.

What is a honeypot crypto scam and how to spot it?

Stripe Co-Founder Is ‘Enthusiastic’ About Bitcoin, 3 Years After Ending Its Support