Every time a new Bitcoin (BTC) all-time high is formed, excessive expectations follow. This time was no different as its price briefly touched $69,000 in the early hours of Nov. 9. Bitcoin 8h, we got our November 9th historical correction, seems to be very minor for now. Naturally I expect at bigger correction after we hit the 84k region, and then into blast off.$BTC #Crypto #Bitcoin pic.twitter.com/cfbBkOIFEKWords are just words, so there’s no loss from being excessively bullish or bearish, but in options markets there’s a cost for placing those bets. For example, on Nov. 10, a right to buy Bitcoin (call option) at $100,000 on Dec. 31 is trading at BTC 0.022, or $1,460. For this privilege, the investor pays an upfront fee, which is also known as the premium.Analysts and pundits quickly issue their $100,000 targets after Bitcoin posts its highest monthly close ever. However, history has proven that short-term price estimates seldom work, and it doesn’t matter if you’re an anonymous Twitter figure or a well-versed multi-million dollar crypto fund manager.

Despite being a widely successful venture capital investor, Tim Draper’s $250,000 price guess for 2020 was off by 88%. Even renowned bank analysts can get it very wrong, as did a Citibank FX Wire “Market Commentary” from Nov. 2020 where they cited a potential $318,000 high in 2021. Still, with 50 days till year-end, maybe some of those prophecies will turn out true, but the majority remains no better than random numbers.Bears are possibly eyeing regulatory hurdles, for example, Singapore became the latest region to ban crypto derivatives exchanges services. Huobi Global announced on Tuesday that it would shut down accounts of all Singapore-based users by the end of March 2022. In September, Thailand’s Securities and Exchange Commission also recommended revoking Huobi’s local operating license.An initial analysis based on the open interest of call (buy) options and put (sell) instruments presents a balanced situation for Nov. 12’s $1.3 billion options expiry. 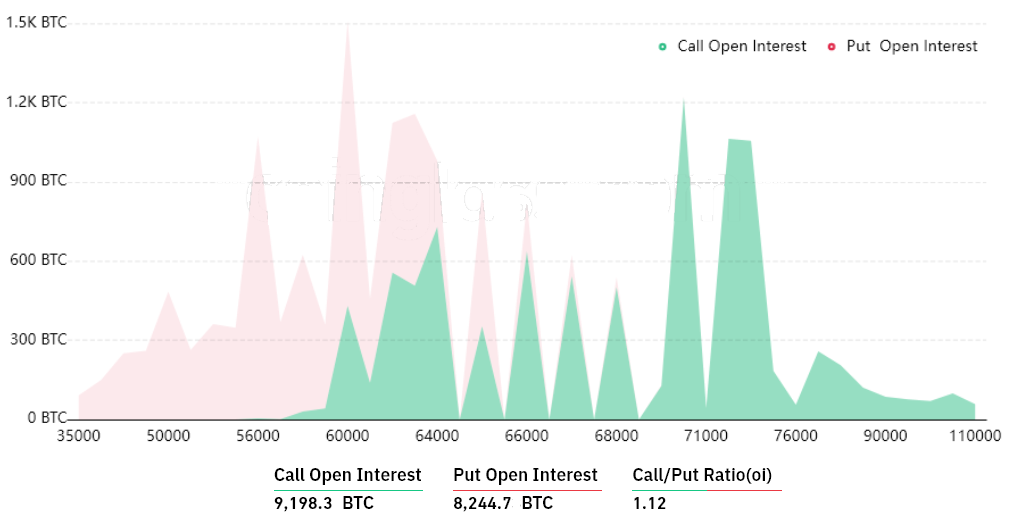 At first sight, the $630 million call (buy) options dominate the weekly expiry by a mere 12% compared to the $565 million puts (sell) instruments.However, the 1.12 call-to-put ratio is deceptive because the recent rally will probably wipe out most bearish bets. For example, if Bitcoin’s price remains above $66,000 at 8:00 am UTC on Nov. 12, virtually every put (sell) instrument becomes worthless. There is no value in a right to sell Bitcoin at $58,000 or $62,000 if it’s trading above that price.

Below are the four most likely scenarios for the Nov. 12 expiry. The imbalance favoring either side represents the theoretical profit. In other words, depending on the expiry price, the active quantity of call (buy) and put (sell) contracts varies:This crude estimate considers call options being exclusively used in bullish bets while put options in neutral-to-bearish trades. This oversimplification disregards more complex investment strategies.For instance, a trader could have sold a put option, effectively gaining a positive exposure to Bitcoin above a specific price. Unfortunately, there’s no easy way to estimate this effect.

The bears’ best hopes turned out to be ineffective

After a 19% rally in 30 days, bulls dominate Nov. 12’s weekly expiry. One factor that may have been partially responsible for that move was the absence of an adverse price impact after the $1 trillion U.S. infrastructure bill passed the United States House of Representatives. The bill mandates all digital asset transactions worth more than $10,000 to be reported to the IRS.Traders must consider that even bearish news has little to no impact on the price during bull runs. Moreover, the effort bears need to pressure the price is increased and usually ineffective. Bulls might take advantage of the current situation by pushing BTC above $70,000, which would result in an additional $105 million estimated profit which would push their total to $410 million.The views and opinions expressed here are solely those of the author and do not necessarily reflect the views of Cointelegraph. Every investment and trading move involves risk. You should conduct your own research when making a decision.

A RUNE with a view: How smart crypto traders caught a 48% price pump