Layer-two (L2) solutions for the Ethereum network have become a popular topic of discussion and speculation on their associated tokens backed the massive rally seen in many of the protocols this year. The parabolic growth of the decentralized finance (DeFi) and nonfungible token (NFT) sectors also led to a surge in the cost of carrying out simple transfers and this prompted developers and investors to migrate to L2-supportive platforms.One L2 solution that saw its token price rise to new highs earlier in the year and now looks poised to make another breakout higher is Polygon (MATIC), a proof-of-stake blockchain protocol that aggregates scalable solutions on Ethereum to support a multi-chain ecosystem. Data from Cointelegraph Markets Pro and TradingView shows that MATIC hit a low at $1.01 on Sept. 21, and over the past few months, the price has been in a steady uptrend, bringing the altcoin above the $2 mark on Dec. 1.

Polygon’s ecosystem is expanding and proof of this can be seen in the increase in protocol launches, cross-chain migrations, the launch of a Polygon-focused exchange-traded product (ETP) and a steady uptick in user activity.

One of the biggest drivers of MATIC price and on-chain activity has been the addition of new protocols to the Polygon network throproject launches and cross-chain migrations. Most recently, IDEX decentralized exchange announced that it would launching v3 of its exchange on the Polygon network, making it the first hybrid liquidity DEX on Polygon. Tomorrow. Approximately 12 PM PST.

IDEX v3, the first Hybrid Liquidity DEX will be launching on @0xPolygon.

✅ Combined AMM + Order Book Liquidity
✅ Trading Rewards + Liquidity Mining
✅ No failed transactions
✅ Real limit & stop-loss orders
✅ Cheap transaction fees pic.twitter.com/1nmOEzEGLWThe Polygon network has seen project launches from NFT projects like the OpenBiSea NFT marketplace and gaming/DeFi platforms like Rainmaker Games, Harvest Finance and Jarvis Network. Currently, the Uniswap community is in the process of voting on whether to add Polygon support for Uniswap v3 and after a majority yes Phase 1 vote on Nov. 25, the process has shifted into Phase 2.

Another reason for the bullish price action for Polygon has been increased interest from institutional investors. Several exchange-traded products (ETPs) for Polygon have been listed in recent months, including the Osprey Polygon Trust in September and the 21Shares Polygon ETP in November.Polygon is also included on the list of assets being explored by the Grayscale Investments as a potential Trust candidate. The network has also benefited from a $20 million investment fund launched by Wintermute, a digital asset market maker focused on helping to bootstrap the development of decentralized applications on Polygon. Currently, the Polygon network is receiving increased attention as it prepares to host a ZK Summit on Dec. 9 where developers will discuss the “current state and future of zk-STARKs and applications of zero-knowledge proofs.”

Increase in active users and wallets

A third reason for the bullish price action seen in MATIC has been the steady increase of users on the network as evidenced by the increase in wallet addresses holding a balance.

As shown in the graph above, the number of Polygon wallets holding a balance has steadily increased throughout 2021 and is currently at an all-time high of 282,760.Evidence of the increased activity can also be found in the data for total revenue generated from fees on the network, which has been steadily increasing over the second half of 2021.

As new protocols continue to list on the Polygon network, these stats are likely to rise if new users continue to use the platform to escape the high fees seen on the Ethereum network. VORTECS™ data from Cointelegraph Markets Pro began to detect a bullish outlook for MATIC on Oct. 15, prior to the recent price rise. The VORTECS™ Score, exclusive to Cointelegraph, is an algorithmic comparison of historical and current market conditions derived from a combination of data points including market sentiment, trading volume, recent price movements and Twitter activity. 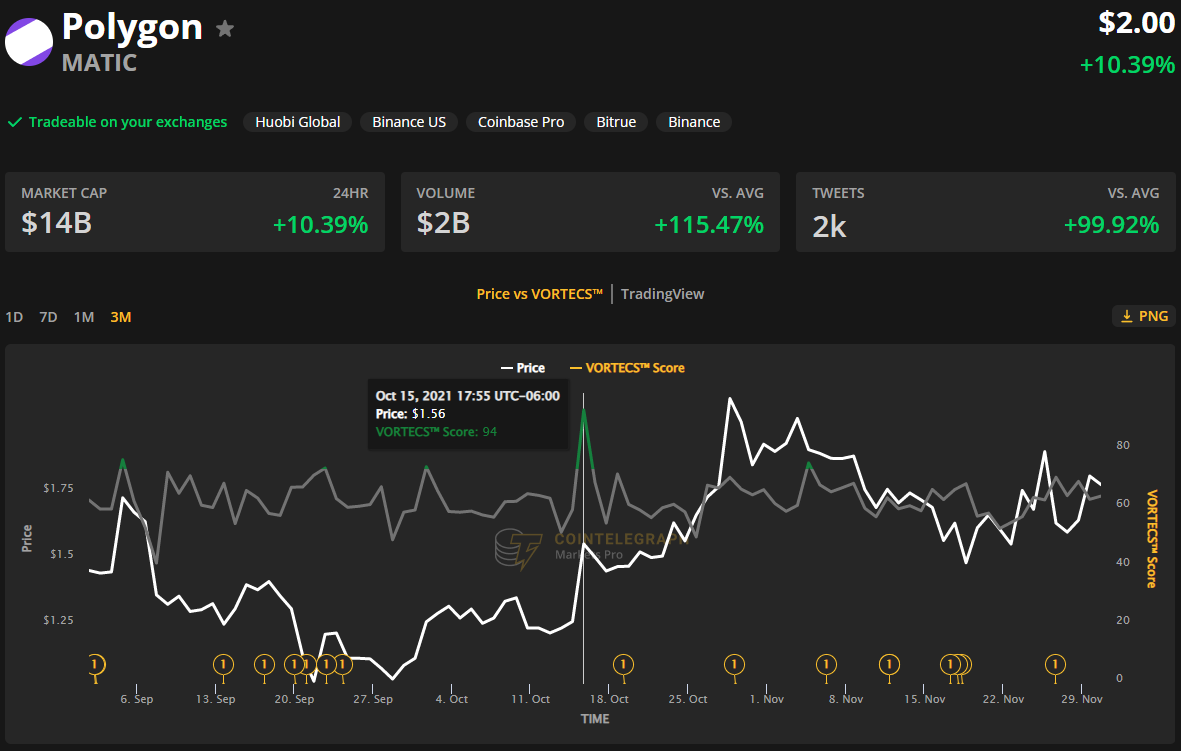 As seen in the chart above, the VORTECS™ Score for MATIC spiked into the green zone on Oct. 15 and reached a high of 94 around 48 hours before the price began to increase by 57% over the next six weeks. The views and opinions expressed here are solely those of the author and do not necessarily reflect the views of Cointelegraph.com. Every investment and trading move involves risk, you should conduct your own research when making a decision.

Bank of Israel Has Already Tested a Digital Shekel