A new study from the United Kingdom revealed that most game studios have already started exploring blockchain technology for their upcoming titles.Commissioned by blockchain platform Stratis and undertaken by insight agency Opinion, the new research surveyed 197 video game developers in the United States and the United Kingdom. The results showed that 58% of developers are beginning to use blockchain technology, and almost half of the respondents (47%) started incorporating nonfungible tokens (NFT).The study indicates developers’ confidence in blockchain and NFTs, as two-thirds of studios expect blockchain to become prevalent in the gaming industry within the next two years. While 72% of respondents are considering using blockchain and NFTs in upcoming games, more than half (56%) plan to apply the new tech within 12 months.Speaking to Cointelegraph, Stratis CEO Chris Trew explained that blockchain techn, tokens and NFTs are vital technologies for new digital worlds and gaming experiences. “They enable players to own a stake in the games they play by, for example, buying land within a metaverse game as an NFT or a car in a racing game,” he said.“Historically, games have been pay-to-play, and the value accrued only to companies and platforms. Blockchain and NFTs turn this situation on its head,” Trew added. 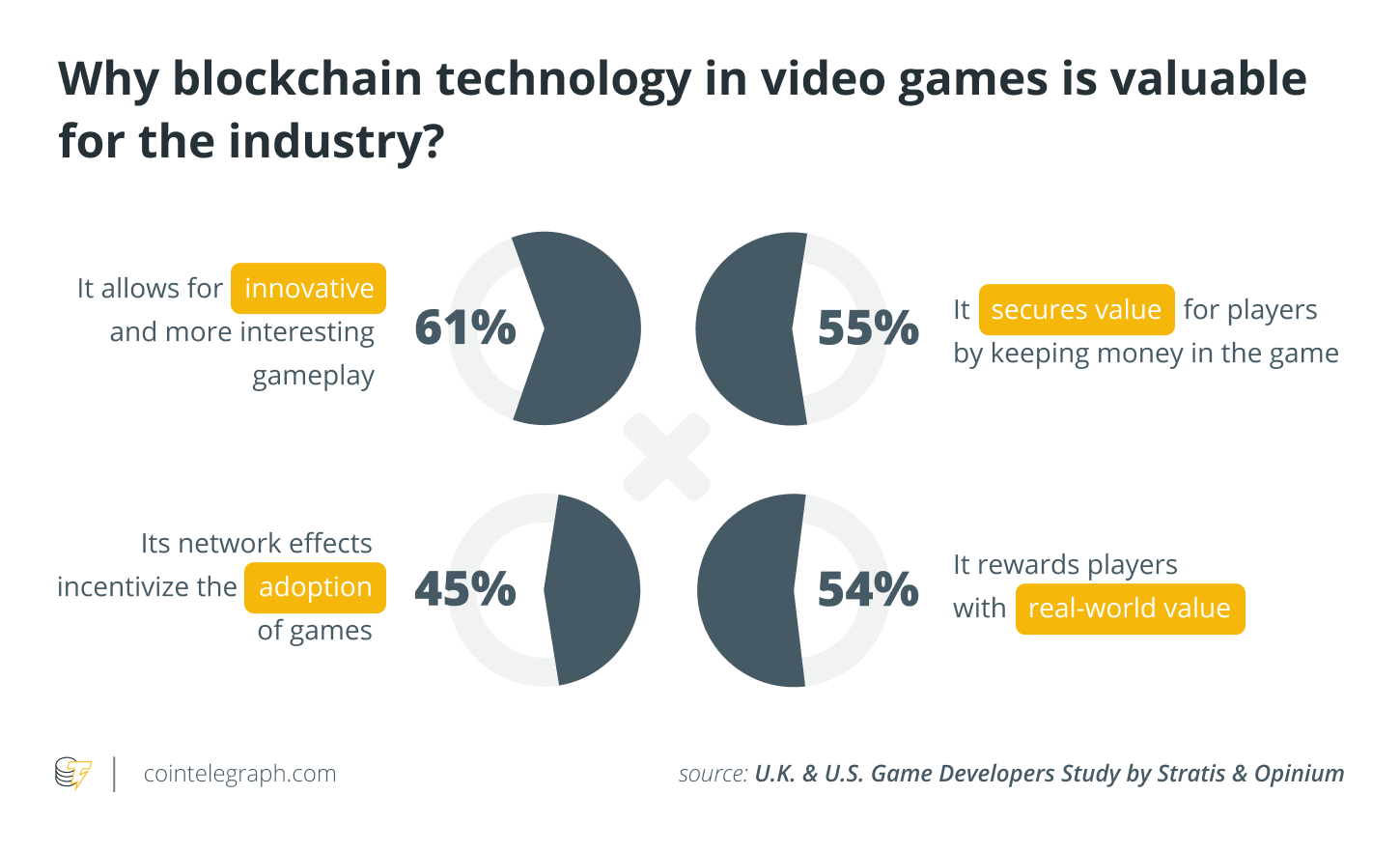 The top three benefits of blockchain for the video game industry are innovative gameplay (61%), securing value for players by keeping money in the game (55%), and rewarding players with real-world value (54%), according to the study.While indie game developers moved to the blockchain and NFT space first, with around 20 of them working with Stratis blockchain, Trew believes that major developers, also known as AAA companies, won’t be far behind. Big names such as Ubisoft and EA have already announced their interest in the technology, and Epic Games has welcomed blockchain games to its platform.Game developers’ interest in blockchain focuses on decentralized finance or GameFi (57%), the play-to-earn model (46%), NFTs offering in-game item ownership (44%), and in-game digital currency (42%). Game developers will consider play-to-earn games’ network effect, or players will simply migrate to games that reward them for their time, Trew commented. “Gamers are passionate. Giving them a chance to have a stake in the game, to be able to earn money in the metaverse just like you can in the real world is revolutionary.”