2021 has been one of the most interesting years for blockchain technology and cryptocurrencies, both in terms of adoption and mainstream acceptance. From governments such as El Salvador to large corporations like Tesla, Goldman Sachs, Bank of America and Morgan Stanley, many institutions have made a step toward becoming a part of the ecosystem.Even so, there were a few issues and events that soured the mood for cryptocurrency investors and the community in general.

Following the United States Security and Exchange Commission’s approval of ProShares’ Bitcoin (BTC) futures exchange-traded fund early in October, Bitcoin rallied to a new all-time high of $68,789.63 on Nov. 10, as per data from Cointelegraph Markets Pro. The ProShares Bitcoin Strategy ETF, which trades under the ticker BITO, had the biggest ever first day of any ETF in terms of natural volume, indicating how highly awaited the launch of a BTC ETF was.Soon after, on Nov. 12, the financial regulator spoiled the party by rejecting Van Eck’s proposal for a spot Bitcoin ETF, which led the price of the flagship cryptocurrency to start its downward spiral journey.Jan van Eck, CEO of VanEck, wasn’t pleased with the rejection.We are disappointed in today’s update from the SEC declining approval of our physical bitcoin ETF. We believe that investors should be able to gain #BTC exposure through a regulated fund and that a non-futures ETF structure is the superior approach. @tyler @gaborgurbacsThe bid to get approval from the SEC for a spot ETF has been going on for more than eight years, since July 2013 when Cameron and Tyler Winklevoss tried to launch the “Winklevoss Bitcoin Trust.” Even though such a long time has passed and the narrative around cryptocurrencies has changed, Gary Gensler’s SEC has not yet approved a spot ETF for Bitcoin.Eric Balchunas, senior ETF analyst at Bloomberg, opined on the SEC’s rejection. Balchunas has been vocal about the SEC’s rejection of the several spot ETF applications that have been filed. He has become one of the prominent voices tracking new ETF developments surrounding cryptocurrencies like Bitcoin and Ether (ETH).She (the SEC) is Just Not That Into You (Spot Bitcoin ETF Filings) = my summary of @JSeyff great note today explaining why spot bitcoin hopes are so bleak (unfortunately). The bar SEC sets is so high and so inconsistent one can only conclude they just don’t want to see it happen. pic.twitter.com/7HRDReWF2N

The Ethereum network underwent a landmark upgrade in 2021: its London hard fork, which put ETH on a deflationary trajectory with Ethereum Improvement Proposal (EIP) 1559. As of the time of writing, 1.244 million ETH has been burned, valued at over $4.96 billion. Along with the burn mechanism being introduced, Ethereum gas fees also saw a huge spike in light of the increased utilization of decentralized finance (DeFi) protocols on the blockchain and the proliferation of Ethereum-based nonfungible tokens (NFTs) in the cryptoverse. Gas fees continue to cross 100 gwei, even leading up to 2022. “Gwei” is the smallest unit of Ether, equal to 0.000000001 ETH. 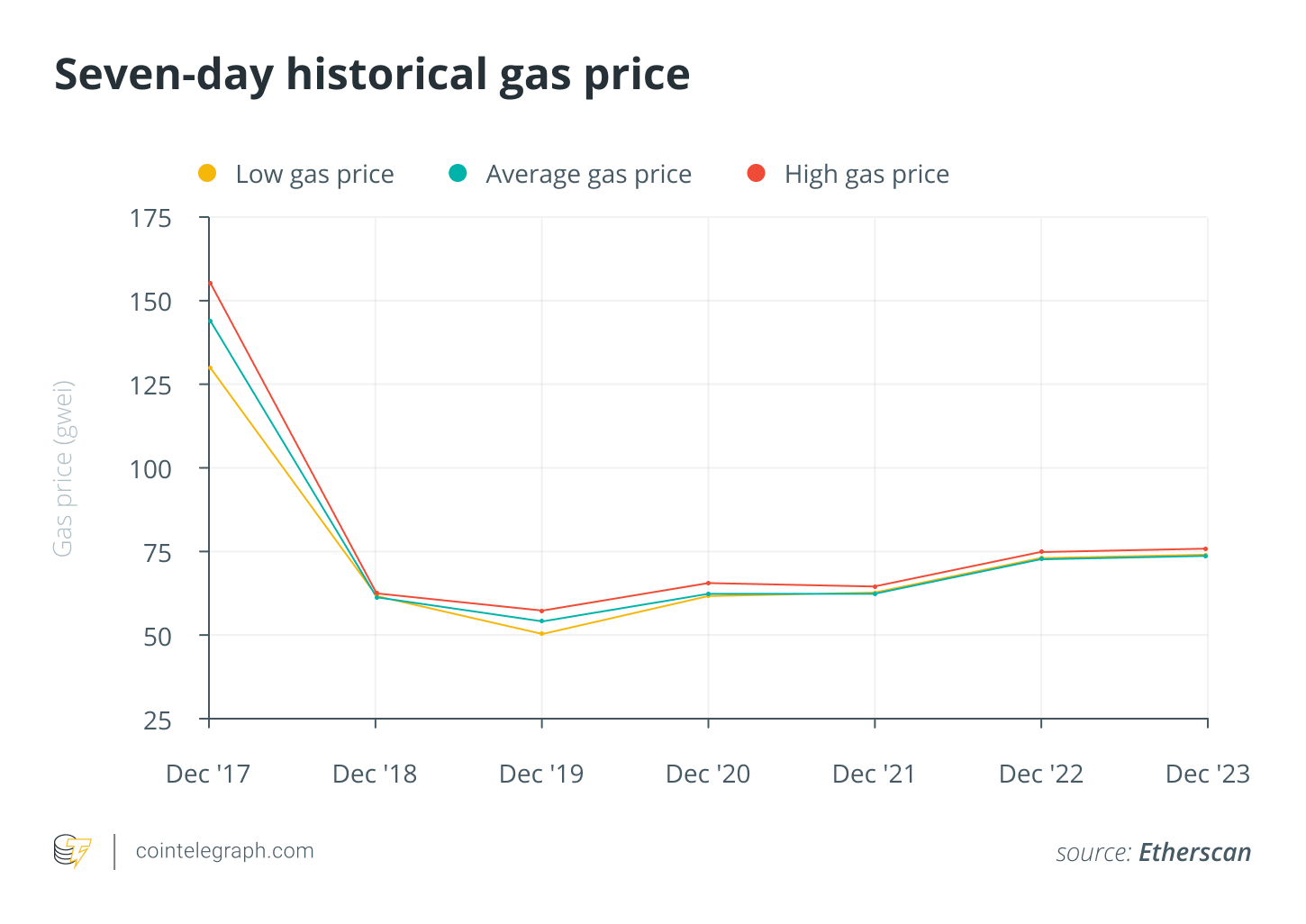 The gas fees on the network hit a yearly high of 373.8 gwei on Feb. 23. Even though gas fees seemed to be in control between May and August, there have since then been several instances of spikes that are highly unfavorable, especially for retail investors in the DeFi markets. This has also led to several DeFi protocols and investors choosing alternative blockchain networks, such as Binance Smart Chain, Solana, Polygon, etc.Say wooooot? #eth #gasfees pic.twitter.com/JdO3j0pgtLIn order to address this ongoing issue, Vitalik Buterin, co-founder of Ethereum, has suggested the upgrades EIP 4448 and EIP 4490, which would serve as a temporary fix by resorting to a method known as data sharding, which would cut costs for zk-Rollups on the blockchain.However, it remains to be seen whether the proposal will pass the governance structure of the network and how effective these upgrades will actually be in reducing gas fees.

Launched in April 2019, Solana has grown rapidly to become one of the leading blockchain networks, with a total value locked (TVL) of almost $12 billion. The network’s native token, SOL, has increased in price by almost 130 times given the current price of around $180. The token hit an all-time high of $260.06 on Nov. 7. 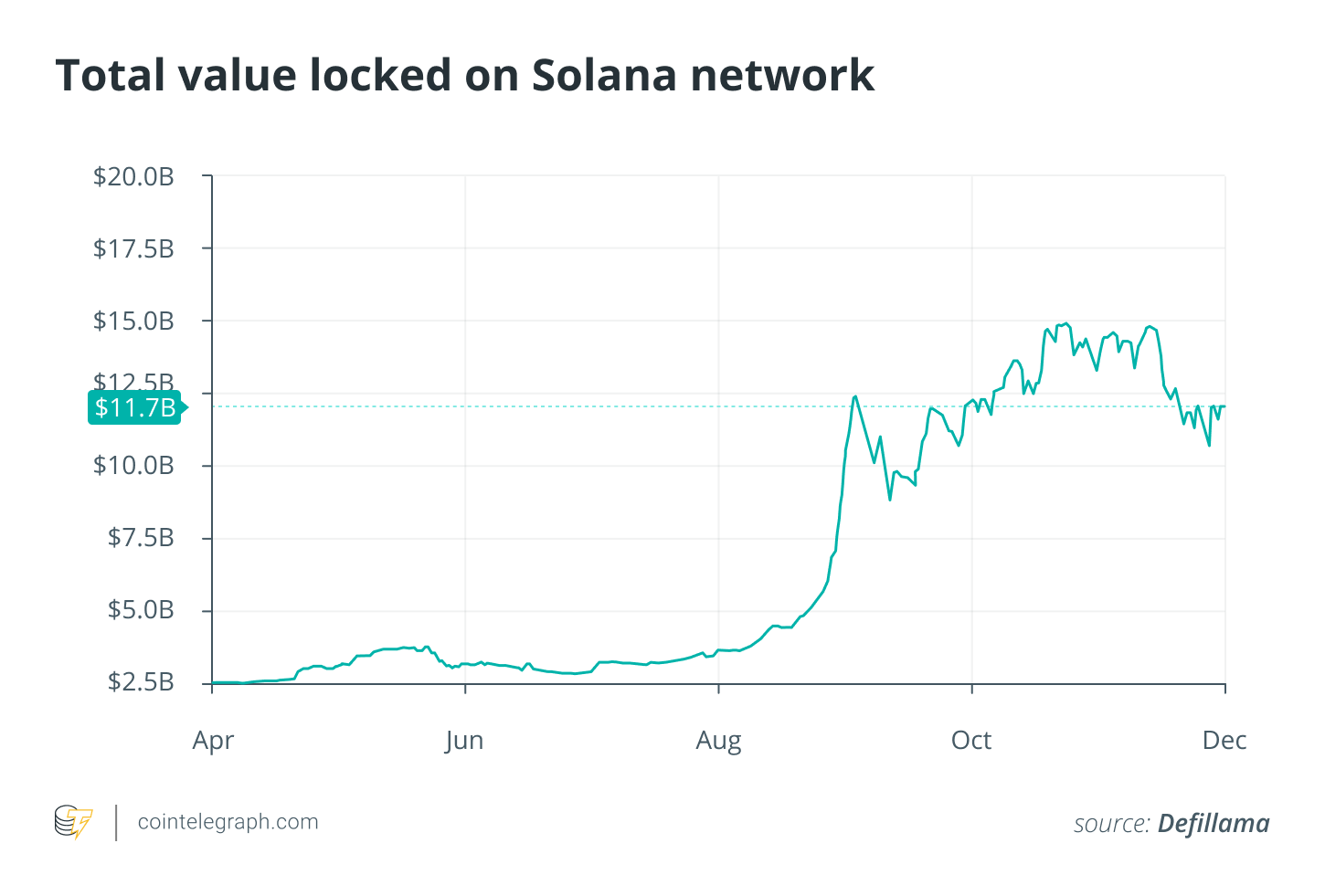 However, on Dec. 4 at 13:46 pm UTC, the Solana network suffered an outage that lasted nearly six hours. The mainnet beta cluster of the network stopped producing blocks at slot 53,180,900, which stopped new transactions from being confirmed on the blockchain. This outage drew criticism from various traders and developers, who took to Twitter to criticize the network.Scott Lewis, co-founder of DeFi Pulse, was one of the critics, citing Serum’s order book data as evidence of a lack of “real customer orders.”hey! someone forgot to turn on the “real customer orders that are definitely not a bot” for serum now that solana is back up.

No new trades in the last 2 hours? pic.twitter.com/fCJ6hqCjvnThis wasn’t the first outage Solana experienced this year. Back in September, the network suffered a 17-hour outage between Sep. 14 and 15 due to a distributed denial-of-service (DDoS) attack targeted at Grape Protocol’s initial decentralized exchange offering on Sept. 14. During a DDoS attack, a large number of coordinated devices or a botnet congests a network with fake traffic in an attempt to take it offline.Soon after the second outage on Dec. 4, the network was hit by another DDoS attack on Dec. 9 that temporarily congested the network, although it managed to stay online throughout the attack. Related: Scalability or stability? Solana network outages show work still neededEven though the attack was blamed on Solana’s fundamental design and use of its proof-of-history consensus mechanism, the developers still seem to have faith in the network’s potential. Solana co-founder Raj Gokal elaborated on the DDoS attack on Twitter:if you’re not helping the @solana community focus on those metrics, if you’re lying or perpetuating lies, if you’re competing for the tiara and bouquet in the hater’s ball…

save your tweet threads until you’re ready to do the hard work of scaling crypto.

until then, fuck off.In the aftermath of the DDoS attack, Solana’s on-chain development efforts saw a noticeable spike in terms of daily GitHub submissions. In fact, the network surpassed Polkadot and Cardano to become the most developed blockchain network between Nov. 12 and Dec. 13.

Binance Smart Chain is the parallel chain to Binance Chain, with both blockchains designed and maintained by the cryptocurrency exchange Binance. BSC was first unveiled in April 2020 and launched soon after in August 2020.Since then, the network has grown to become the second most widely used blockchain to deploy decentralized applications, after Ethereum. According to DefiLlama, the TVL in DeFi protocols on the network currently stands at nearly $17 billion. The TVL hit an all-time high of $31.72 billion on May 10, at the peak of the previous bull run in the market. 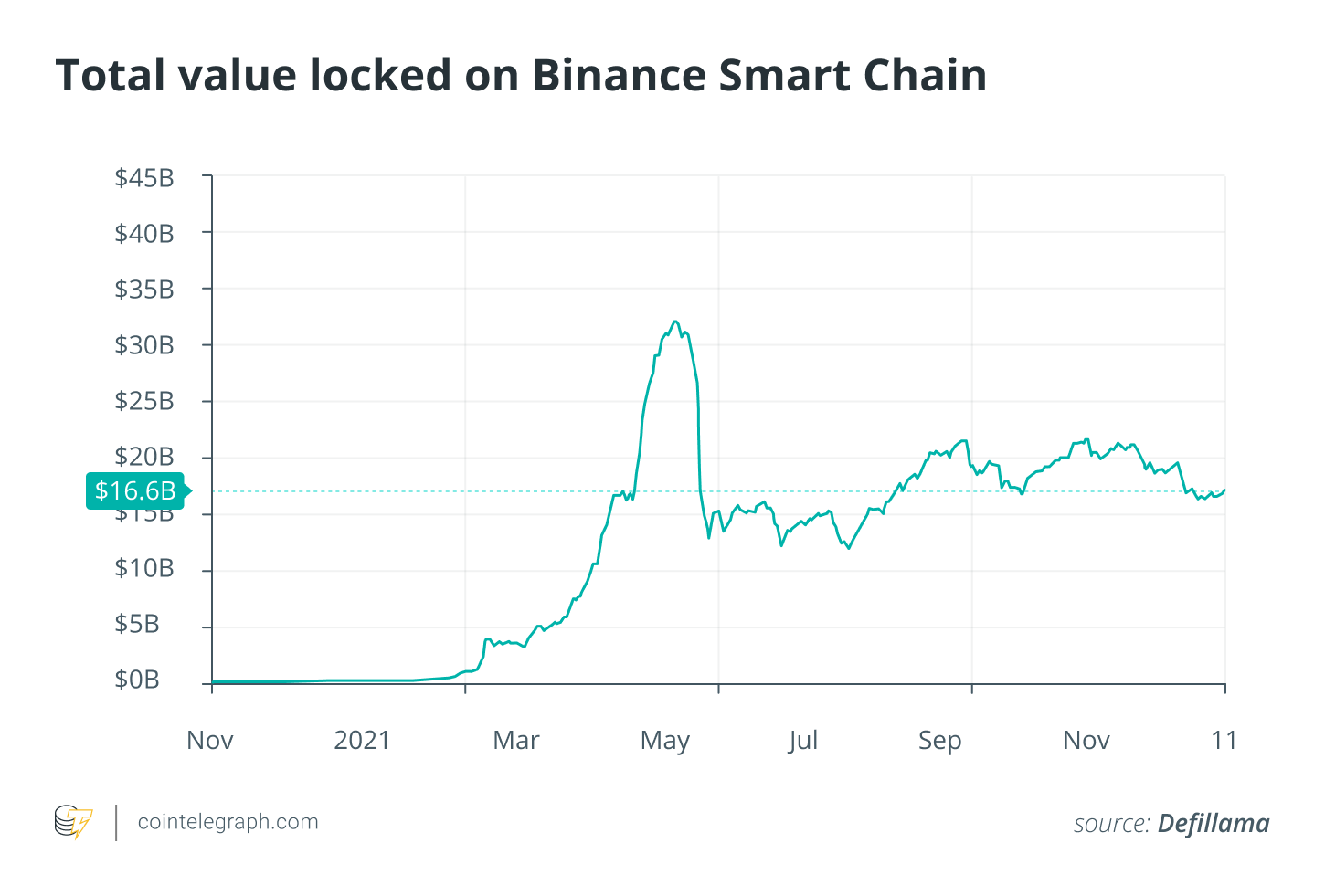 However, the network and the protocols running atop it have been extremely vulnerable to security exploits ever since its launch. Below is a list of some of the DeFi protocols on BSC that have been a victim of security exploits and hacks:Considering that the list above isn’t exhaustive in nature, it is safe to say that there have been hacks and security breaches leading to losses of hundreds of millions of dollars in the 18 months that the network has been in operation. In addition to these security exploits, there have been several phishing attacks on the PancakeSwap decentralized exchange alongside Cream Finance.However, the Binance ecosystem is attempting to address this issue in several ways. The latest effort is the introduction of Project Shield, a security audit program that will add an additional layer of protection for users attempting to gain exposure to both BEP-20 and ERC-20 tokens on the Binance exchange.

Plenty to look forward to

Despite these instances and issues leading to disappointments for the crypto community in 2021, it is evident that the growth in digital currency use is higher than ever before. With innovations like NFTs, GameFi and the Metaverse, the cryptocurrency domain is tapping into the next big thing in the world of art, gaming, music and finance with a single innovation that will change these industries for the better.