It is no secret that nonfungible tokens (NFTs) are still a niche subject. Despite their rapid surge in popularity during 2021, there is still a significant percentage of people who do not know what an NFT is. Reflecting on the graph below, it is evident that a lot of work needs to be done for NFTs to truly hit the mainstream.However, it is clear from recent months that there is potential for this to happen, and there have been many signs of awareness and adoption which I will discuss in this article. 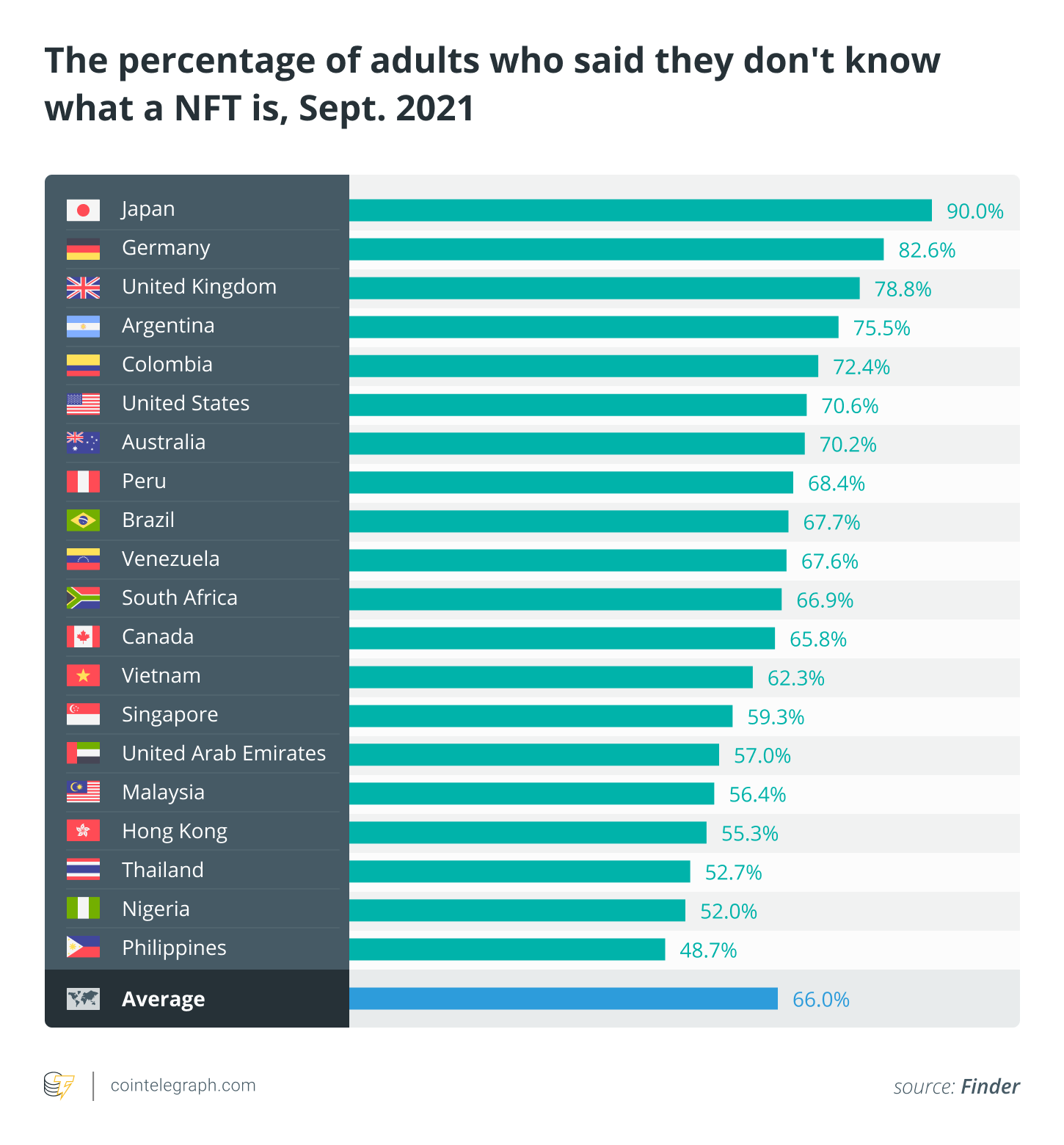 Celebrities have been a key proponent in the rise of NFTs. Initially, the NFT space began with artists, creators and traders, all of whom set the foundations for what the NFT space is today. Since then, notable figures have also entered the space, whether it be via creating their own projects or simply collecting. The influx of celebrities in recent months has been extremely valuable in terms of expanding the reach of NFTs but, in the NFT space, everyone starts from square one and value does not arise from influence. For many celebrities that created NFT collections without considering the long term, their NFTs have failed to sustain value, therefore reinforcing this point.There is a difference between celebrities that have provided value and those who have sought to profit from the space. Take, for example, Pharrell Williams, Snoop Dogg, Jimmy Fallon, Tom Brady, Paris Hilton, Post Malone, The Weeknd, Stephen Curry, Lil Baby, Timbaland and DJ Khaled. They are all celebrities who have bought into collections and displayed them as their profile pictures.These celebrities have certainly been a major catalyst for the growth of the NFT space, and as the number of celebrities in the space snowballs, there is no doubt that their influence will help to cement the crypto culture into the mainstream. But, most importantly, they are joining us — they are not changing the dynamics or making the rules. The NFT space is a collaborative effort, and we are building value together.

Perhaps the most significant mainstream bridge to date has been the Adidas partnership with Bored Ape Yacht Club, Gmoney, and PUNKS Comics. In a move that shook the NFT world with excitement, Adidas launched a new Twitter account, Adidas Originals, with these new partners to discuss their plans.In this space, they announced a number of important things — firstly, their plans for entering the Metaverse, a digital world that will allow users to interact virtually in the future. To illustrate their idea, they released a trailer that depicts Adidas’ Bored Ape and representations of its new partners seamlessly traveling through the sky and into the Metaverse.Today we leap Into The Metaverse with @BoredApeYC, @gmoneyNFT & @punkscomic.

It’s time to enter a world of limitless possibilities.https://t.co/LmgtrRn20c pic.twitter.com/40kU8tayrSThe Adidas Originals account also changed its profile picture to the newly purchased Bored Ape Yacht Club NFT #8774, a very specific blue ape they named Indigo Herz, with heart glasses and a fisherman’s cap, would be the face of its brand in the Metaverse. 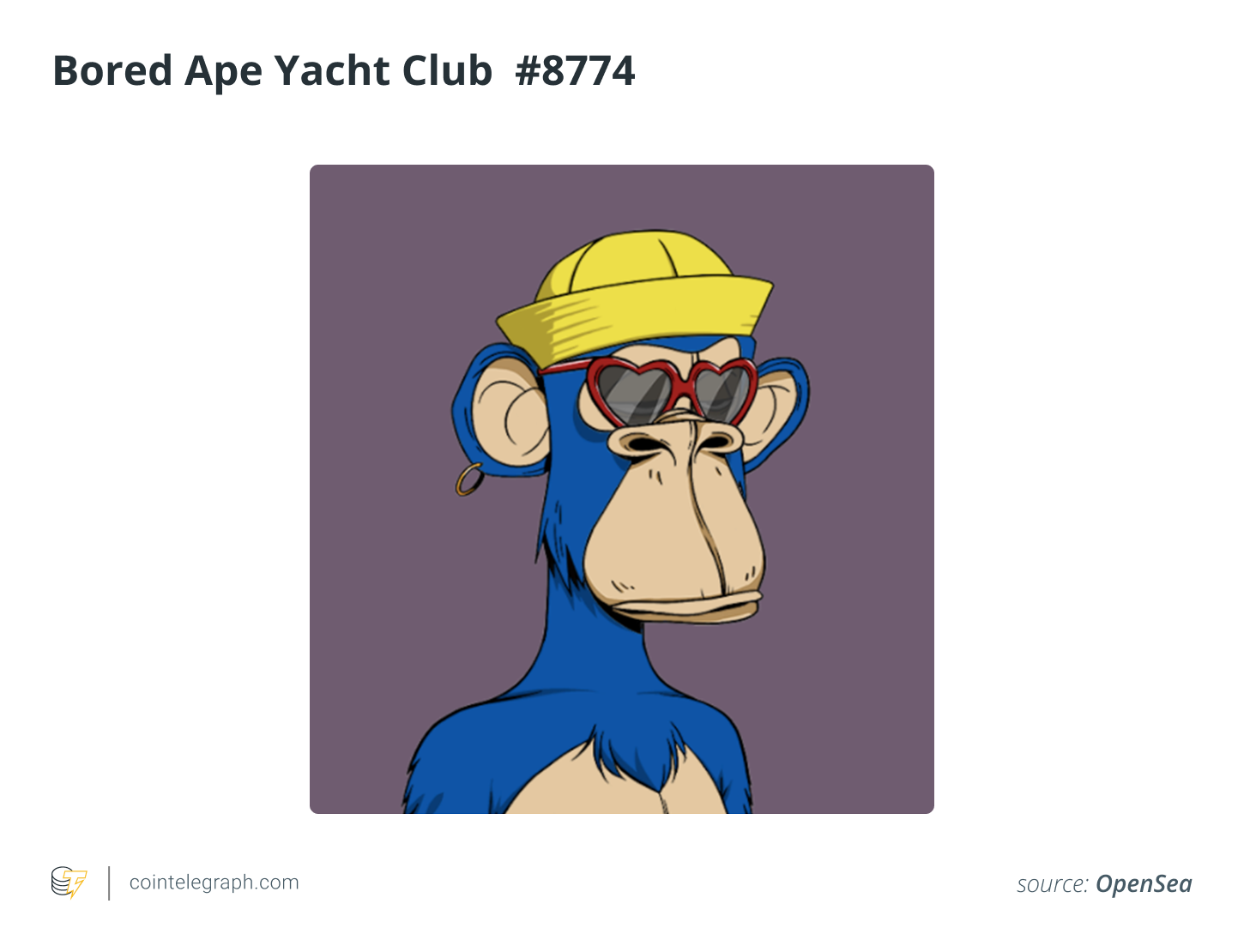 Why is this so groundbreaking?

Thus far, the NFT space has been comprised of individuals. Whether it be regular traders, creators or even celebrities, it has been the individuals who have pushed the space forward. Now enter Adidas, a traditional and mainstream brand that has four million Twitter followers and 26 million followers on Instagram. The presence of this one brand has the power to bring more eyes to the space than all of the individuals combined, thus spurring the growth of NFTs significantly.To further this vision, Adidas also partnered with Coinbase, the leading cryptocurrency exchange platform. Additionally, it also partnered with The Sandbox, one of the most popular metaverse games. In a tweet, Adidas showcased its very own Sandbox plot, a piece of digital land which officially cements its position inside this metaverse.Hey @adidasoriginals, impossible is nothing in the Metaverse. What if we invite all of the original thinkers and do-ers to design our future together?https://t.co/xQrfAWHBky pic.twitter.com/fTCaqf6fho

Ubisoft was the next big company to follow the Web3 route this week when it announced that Ubisoft Quartz will be available on the Tezos blockchain. The premise of the platform is that users will be able to buy and sell in-game items named “digits” using cryptocurrencies. This is significant because it will grant players ownership of their in-game items, which within regular games would only be available within and be dependent upon those games’ own individual ecosystems, as opposed to the blockchain, which allows for ownership completely independent of a game world.

Why is this so significant?

Ubisoft is ranked among the top 25 largest gaming companies with over $5.8 billion in capital. If this is just the first step into NFTs, it is certainly capable of something much more complex in the future. Comparable to Adidas and other big brands that have delved into the space, they are each succeeding in bringing more attention to the prospect of NFTs as a technology that is taken seriously.Introducing Ubisoft Quartz
We’re bringing the first energy efficient NFTs playable in a AAA game to Ghost Recon: Breakpoint!

Try it in the beta from December 9 with three free cosmetic drops and learn more here: https://t.co/ysEoYUI4HY pic.twitter.com/owSFE2ALuSDespite the entry of Ubisoft marking a huge step towards bringing NFTs to the mainstream, their announcement was not met without criticism. In fact, their YouTube video received over 20,000 dislikes in the first hour, and the company received resounding backlash across their social media, forcing it to delist the video.When scoping the comments, it is evident that the hate stems from a number of sources where users:This reflection certainly reaffirms the fact that NFTs require a lot of work before being accepted and adopted by a wider mainstream audience. But it is not just individuals — some of the leading game platforms, such as Steam, have banned blockchain games from their store completely. It remains to be seen whether Ubisoft will continue with its plans. However, its initial conviction has also highlighted the fact that NFTs are growing fast, especially if a billion dollar company is considering adopting them!But why are NFTs so controversial, and how is this preventing them from greater mainstream adoption?

What is preventing NFTs from entering the mainstream and what improvements can be made?

Stigma and a lack of trust are two of the most fundamental reasons why NFTs have been prevented from entering the mainstream. To an extent, some of the stigmas are valid when considering those that have fallen victim to rug pulls. Furthermore, many have been left vulnerable to the threat of scams and hacks that have grown increasingly. You have also probably heard that “NFTs are a scam,” “NFTs are for money laundering,” and “NFTs are a pyramid scheme.” But this is not representative of the entire picture.Indeed, there are bad players in the space that engage in this behavior, much like how, in real life, there are scammers too. But this does not account for the entire space. Furthermore, your NFTs can be protected entirely by using a hardware wallet, also known as a cold wallet. It is stored on the blockchain and only you have the private key to access it.To prevent scams further, there undoubtedly has to be better modes of communication introduced for NFT users and safer platforms that ensure the safety of those that use them. Although rug pulls are an issue, they do not occur across the entire space. There are still serious and legitimate NFT projects that are trustworthy. Rather than forcing NFTs into a broader label such as a “scam,” what is required is a greater understanding of the teams behind them, and more research is needed before making investments.Another barrier to mainstream adoption is that, if you are new to the space, setting up a Coinbase account and MetaMask wallet can be extremely confusing if you do not know where to start. There are fees, transfers and difficulties involved at every step of the way, making this a serious barrier for entry. For the average person, this will deter them from even considering entering the space. So, if NFTs are to appeal to the mainstream, there has to be a simpler process of getting started.Support is needed. You cannot be expected to create a wallet, begin trading and make transfers simply on your own unless, of course, you are extremely committed. It is a magnificent task for anyone and, therefore, we need guides, helping hands and ways of supporting people through the process. The intricacies of getting started are a serious barrier for entry and, although guides are helpful, something more comprehensive is needed that will make life easier for everyone involved. Until then, it is difficult to say when NFTs will achieve mainstream adoption.

NFTs have a long way to go before they’re adopted by the mainstream. However, as this article outlines, there are already a number of important indications that suggest they will in the future. Whether it be celebrities, big brands or corporations, more eyes will come to the space and, as the timing aligns and consumers recognise this, a shift in thought could take place. But, before this, a lot of work needs to be done in regards to education and accessibility.There are clearly pros and cons to both regulation and decentralization. Centralized platforms allow for frameworks and safety. On the contrary, decentralization offers innovation and free reign. But on the downside, regulations prevent ownership and free reign, while decentralization enables the breeding of scammers and people acting in bad faith.What we do know is that the NFT is a new technology still in its experimental stages. But already we are seeing attraction from mainstream companies and brands. The adoption of NFTs is inevitable, whether it be slow or fast.This article does not contain investment advice or recommendations. Every investment and trading move involves risk, and readers should conduct their own research when making a decision.The views, thoughts and opinions expressed here are the author’s alone and do not necessarily reflect or represent the views and opinions of Cointelegraph.

Celebrities that rode the crypto wave in 2021

3 reasons why DeFi users are bullish on Abracadabra, Magic Internet Money and SPELL