The S&P 500 and the Nasdaq have declined for five consecutive weeks, indicating that traders continue to reduce exposure to risky assets. Bitcoin’s (BTC) close correlation with United States equity markets has resulted in its price remaining under pressure.Bitcoin has extended its decline during the weekend and is now on track for its sixth successive weekly loss, the first such occurrence since 2014. The weakness in Bitcoin has pulled down the entire crypto markets, whose market capitalization has dipped below $1.6 trillion. 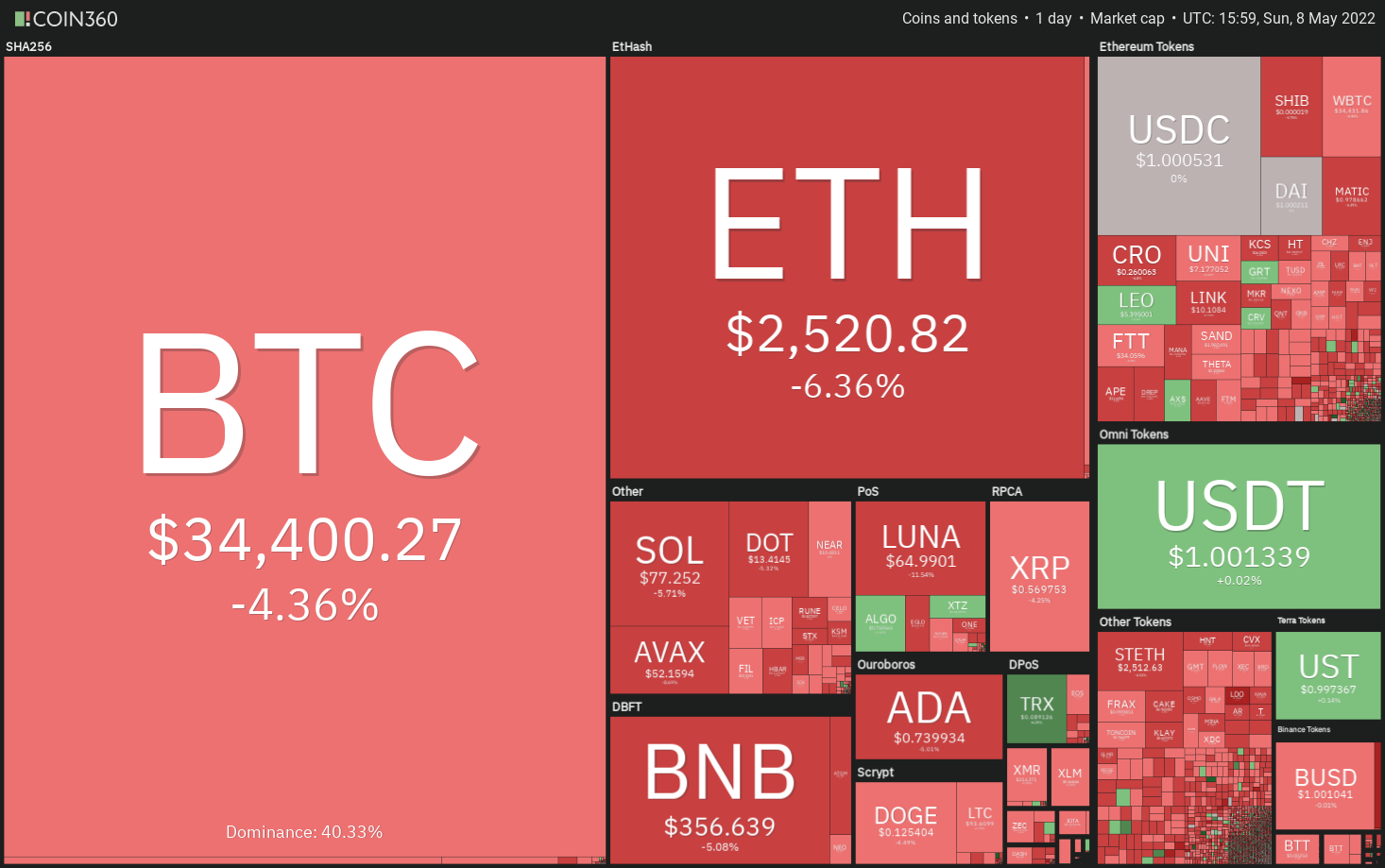 When the sentiment is bearish, traders sell on every negative news. The de-peg of Terra’s U. S. dollar stablecoin TerraUSD (UST) also appears to be increasing sell pressure across the crypto market.After Bitcoin’s six consecutive weekly closes in the red, is it time for a recovery? Let’s study the charts of the top-5 cryptocurrencies that are showing signs of stabilizing in the near term.

Bitcoin turned down from the 20-day exponential moving average (EMA) of $38,268 on May 5 and plummeted below the support line of the ascending channel. This move also invalidated the positive divergence on the relative strength index (RSI). 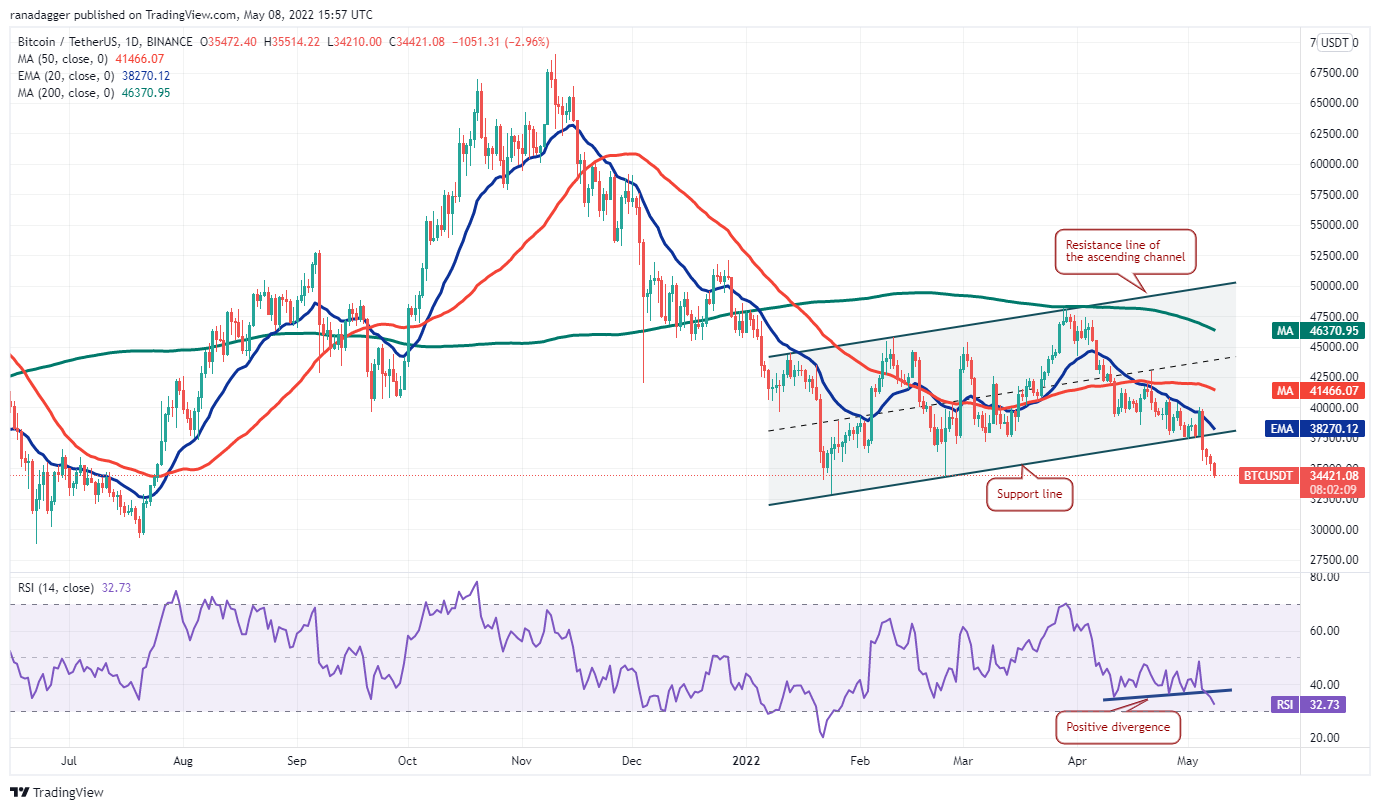 The moving averages have started to turn down and the RSI is nearing the oversold zone, signaling that bears are in control.The BTC/Tether (USDT) pair has a minor support at $34,322 but if bulls fail to defend this level, the decline could extend to $32,917. This is a crucial level to keep an eye on because if it cracks, the pair could witness panic selling and the next stop may be $28,805. If the price turns up from $34,322, the recovery could face selling near the 20-day EMA. If the price turns down from this level, it will suggest that the sentiment remains negative and traders are selling on rallies. That could enhance the prospects of a resumption of the downtrend.This negative view could invalidate in the short term if the bulls push and sustain the price above the 20-day EMA. If that happens, the pair could rise to the 50-day simple moving average (SMA) of $41,466. 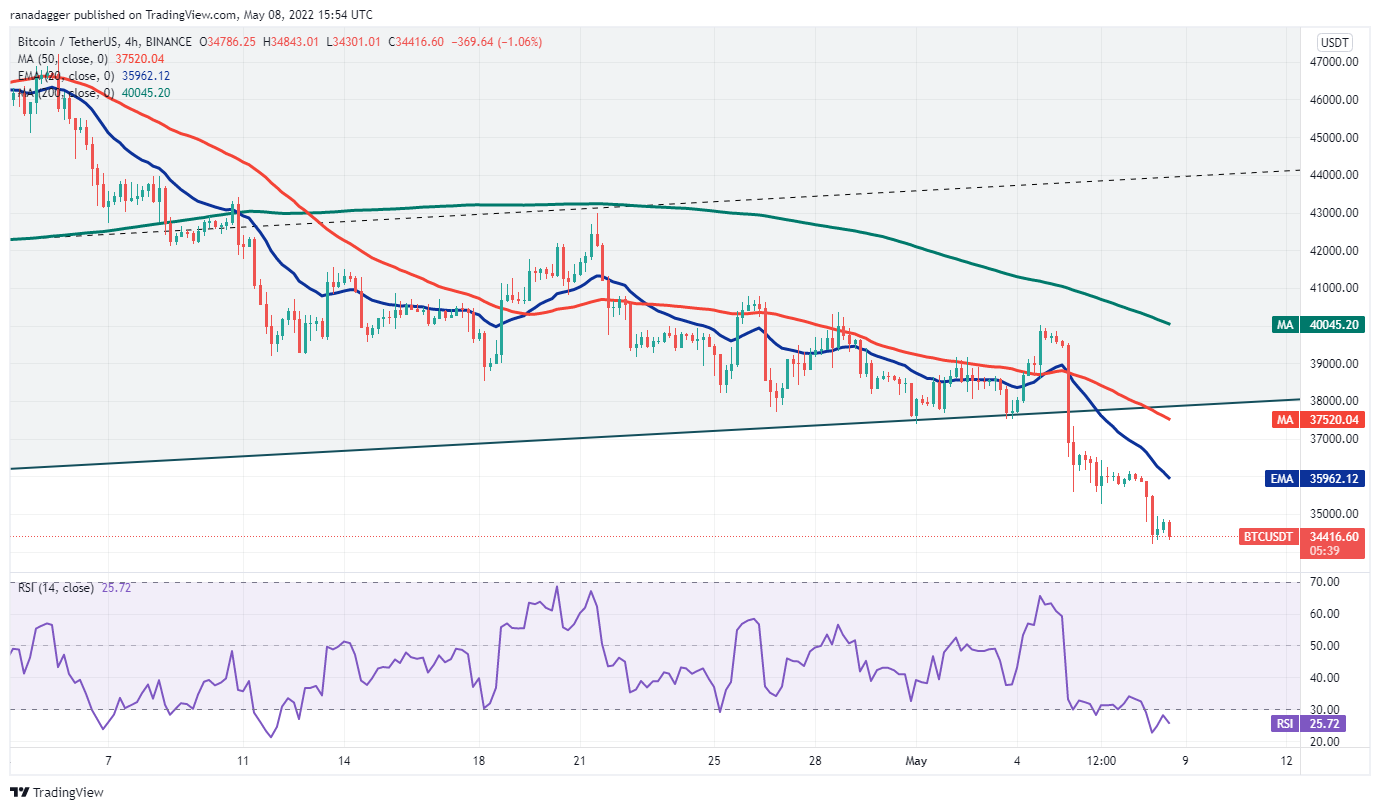 The downsloping moving averages indicate that bears are in command but the oversold levels on the RSI suggest that a relief rally or a consolidation is possible in the near term. If the recovery fails to rise above the 20-EMA, the bears may maintain the selling pressure and the pair could drop to $32,917.Conversely, a break and close above the 20-EMA could signal the start of a strong relief rally. The pair could then rise to the 50-SMA. The buyers will have to push and sustain the price above $40,000 to signal that the downtrend may be over.

Algorand (ALGO) has been trading inside a descending channel pattern for the past few days. The price bounced off the support line of the channel on May 1 and the bulls have cleared the hurdle at the 20-day EMA of $0.69, indicating that the selling pressure could be reducing. 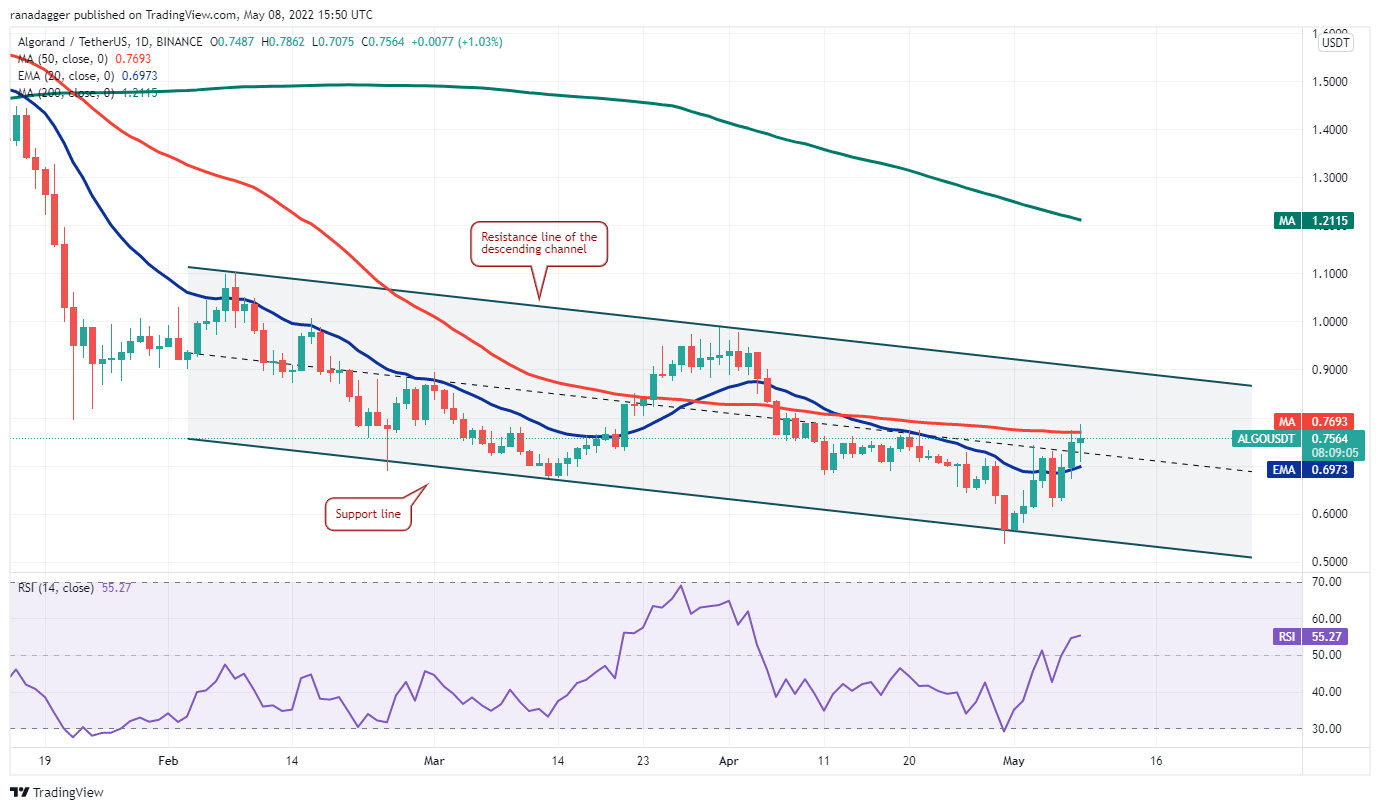 If buyers sustain the price above the 50-day SMA of $0.76, the ALGO/USDT pair could rally to the resistance line of the channel. This is an important level for the bulls to overcome. If they manage to do that, it will suggest the start of a new up-move. The pair could first rise to $1.10 and later to $1.25.On the other hand, if the price turns down from the resistance line, it will suggest that the pair may extend its stay inside the channel for a few more days. The bears will have to sink and sustain the price below the channel to indicate the resumption of the downtrend. 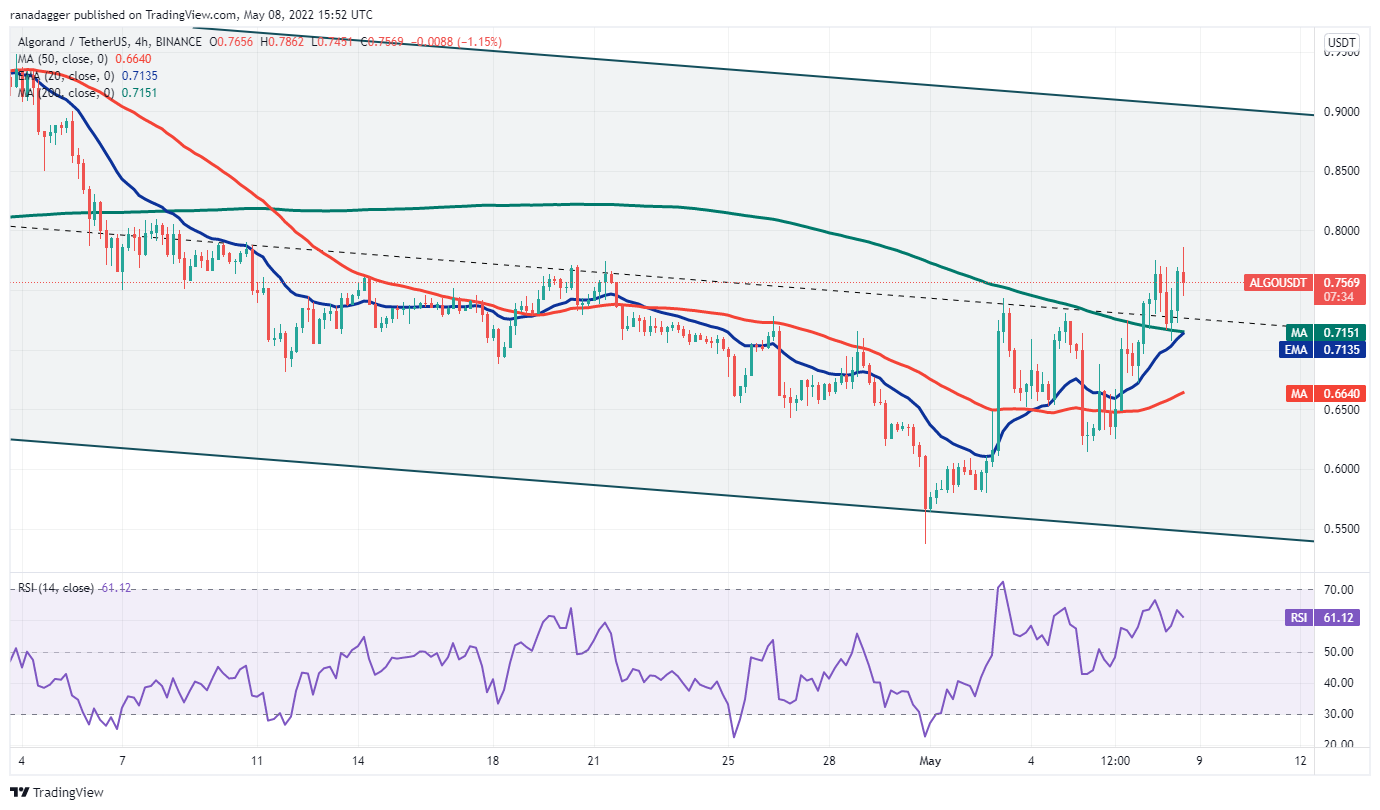 The 20-EMA has turned up and the RSI is in the positive territory, indicating advantage to buyers. There is a minor resistance at $0.80 and if bulls clear this hurdle, the pair could rise to the resistance line of the channel. On the downside, the 20-EMA is the critical level to keep an eye on. If the price rebounds off this level, it will suggest that the sentiment has turned in favor of buyers. That could increase the likelihood of a break above $0.80. Alternatively, if the price slips below the 20-EMA, the next stop could be the 50-SMA.

Monero (XMR) has been finding support near psychological support at $200 for the past few days. The buyers have not allowed the price to break below the downtrend line, suggesting that they are attempting to flip the level into support. 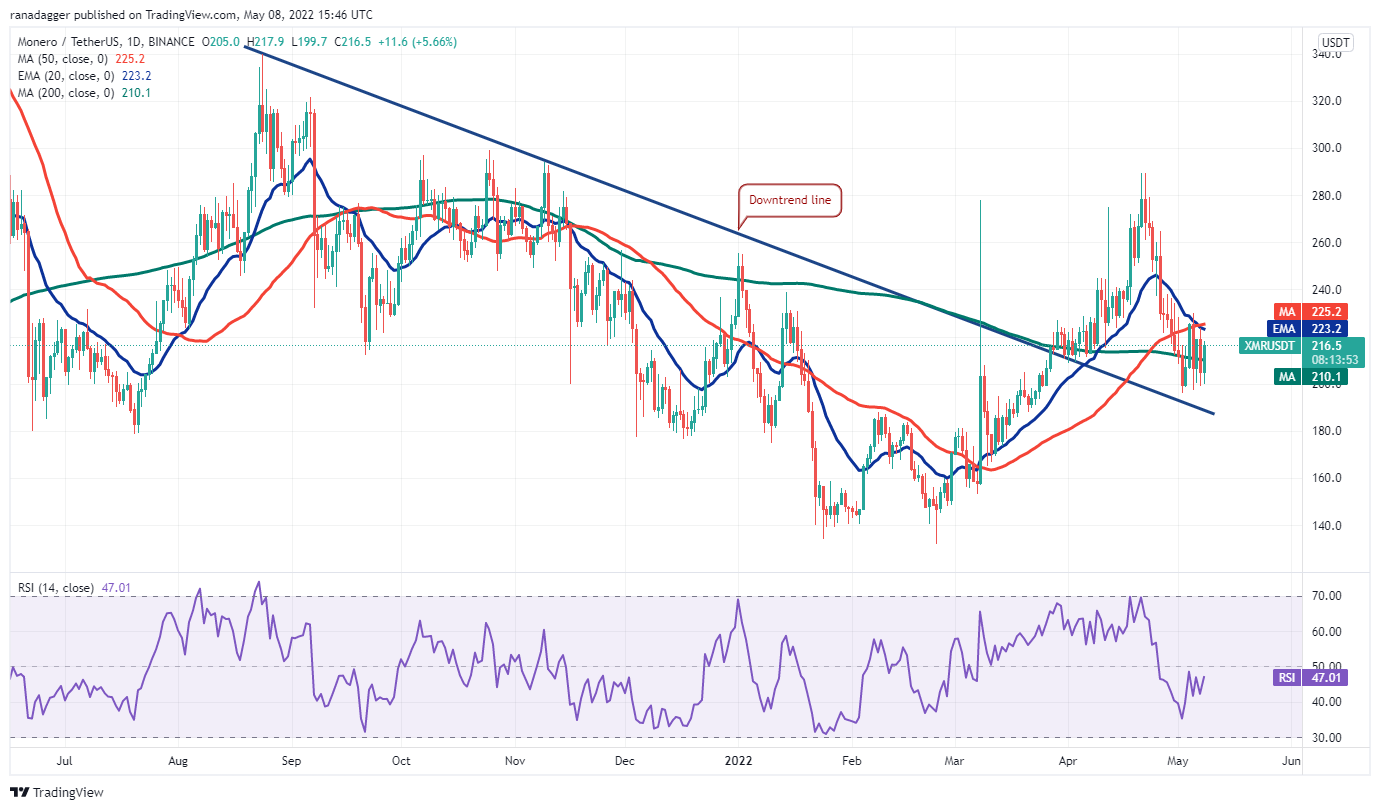 The bulls will have to push and sustain the price above the 20-day EMA of $223 to suggest that the corrective phase may be over. There is a minor resistance at $240 but if bulls clear this hurdle, the XMR/USDT pair could rally to $289.On the contrary, if the price turns down from the current level or the 20-day EMA, it will suggest that the bears have not yet given up. That could increase the likelihood of a break below $200. If that happens, the selling could intensify and the pair may drop to $150. 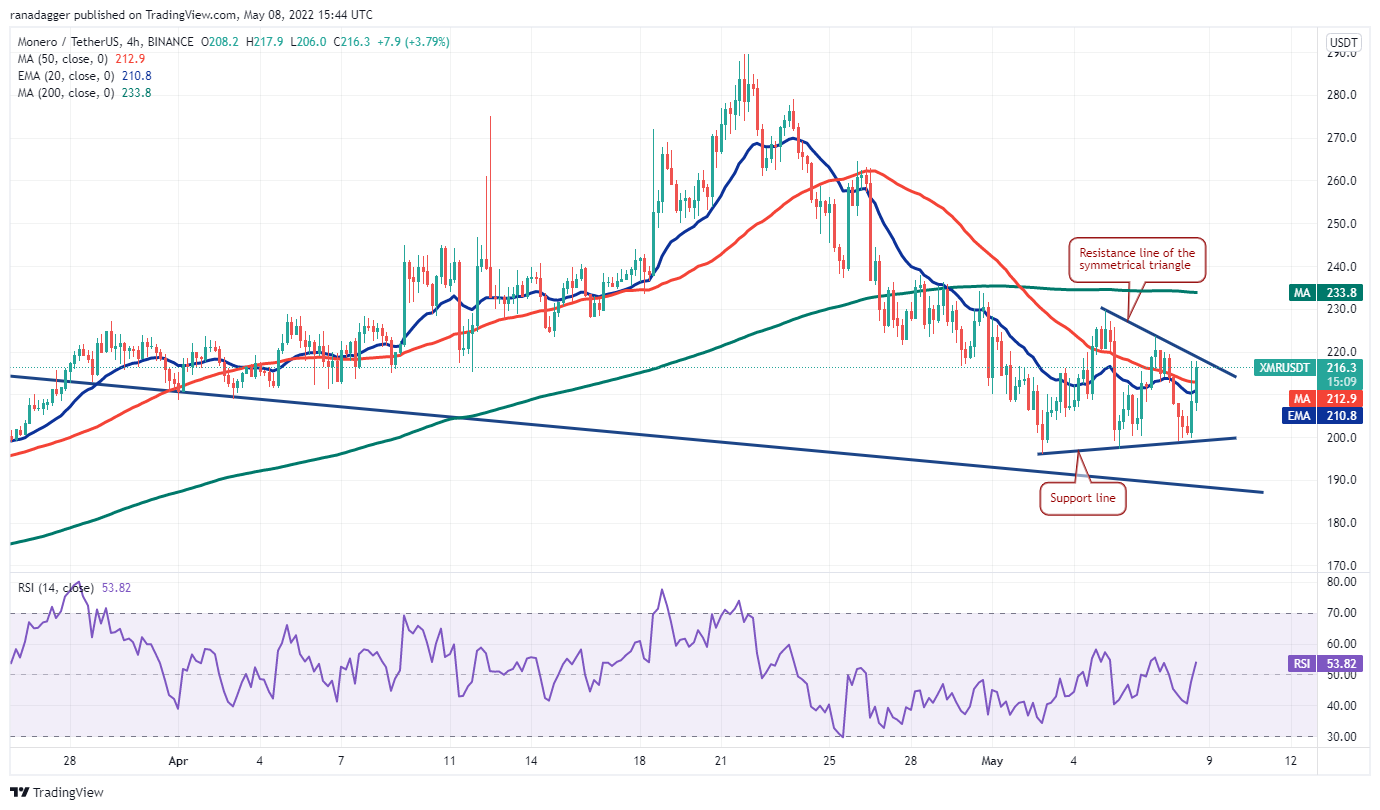 The pair has formed a symmetrical triangle pattern suggesting indecision among the bulls and the bears. If bulls drive the price above the resistance line of the triangle, it will suggest that the downtrend could be over. The pair could then rally to the 200-SMA and later rise toward the pattern target at $252.Conversely, if the uncertainty of the triangle resolves to the downside, it will suggest that the triangle had acted as a continuation pattern. That could signal the resumption of the downward move. The pattern target on the downside is $164.

Tezos (XTZ) broke below the long-term uptrend line on April 29 and the bears successfully defended the breakdown level on May 5. The bears tried to start the downtrend but are struggling to sustain the lower levels. 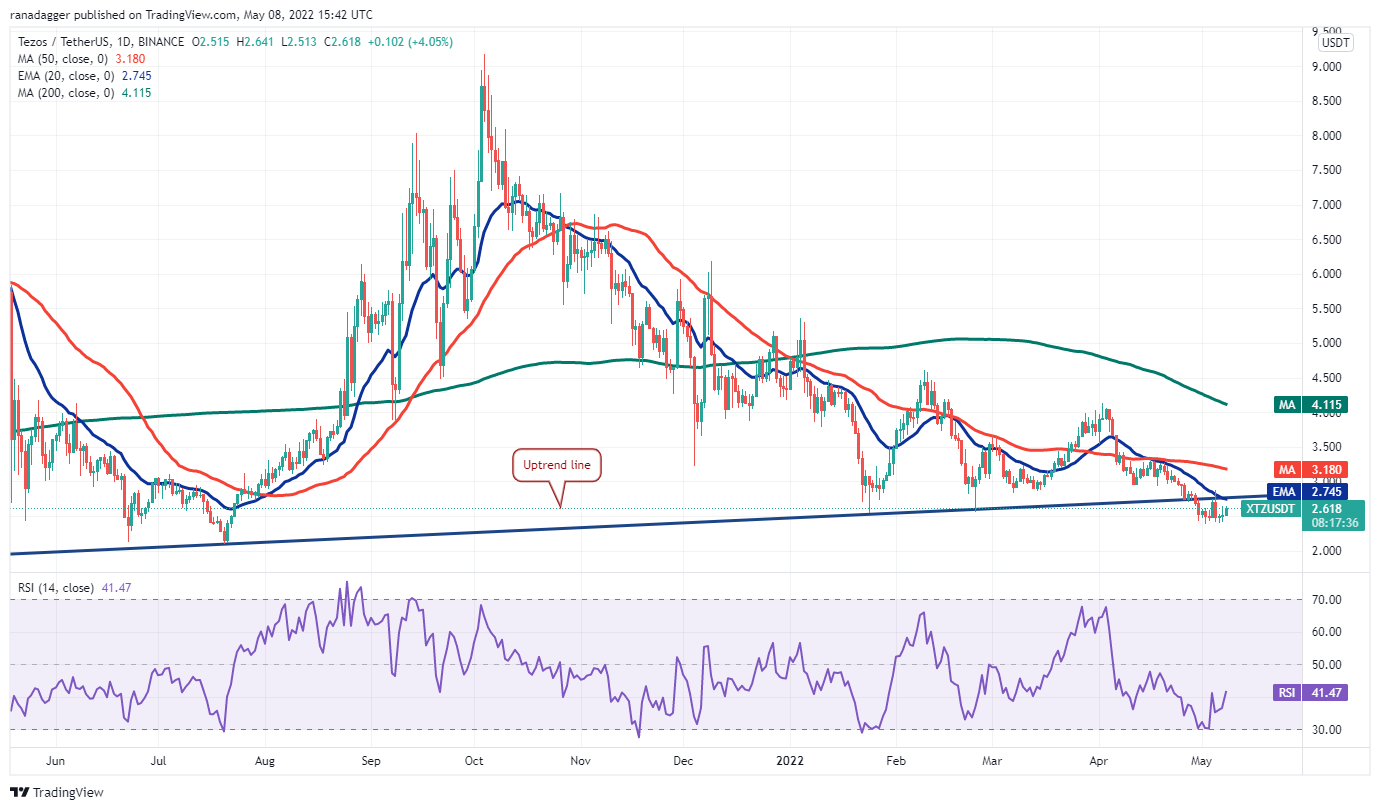 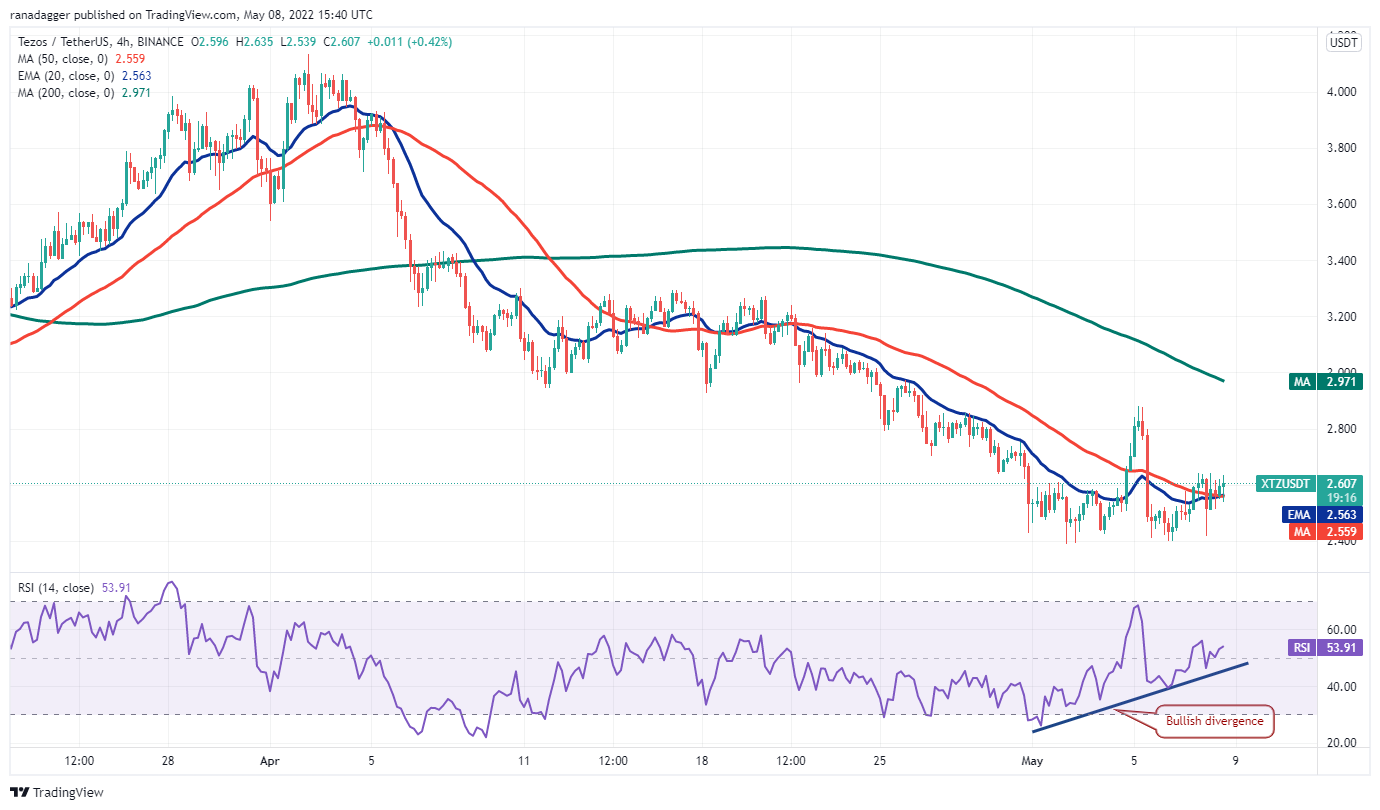 The 20-EMA has flattened out and the RSI has formed a bullish divergence on the 4-hour chart suggesting that the negative momentum is weakening. The pair could now attempt a rally to $2.90 where the bears may offer a strong resistance. A break and close above this level could open the doors for a possible up-move to $3.00 and later to $3.30.Alternatively, if the price turns down from the current level or the overhead resistance, it will suggest that bears are selling on rallies. That could keep the pair range-bound between $2.90 and $2.39. The downtrend could accelerate if bears sink the price below $2.39.

Theta Network (THETA) had been trading between $2.27 and $4.40 for the past several weeks. This range resolved to the downside on May 6, indicating that bears had the upper hand. 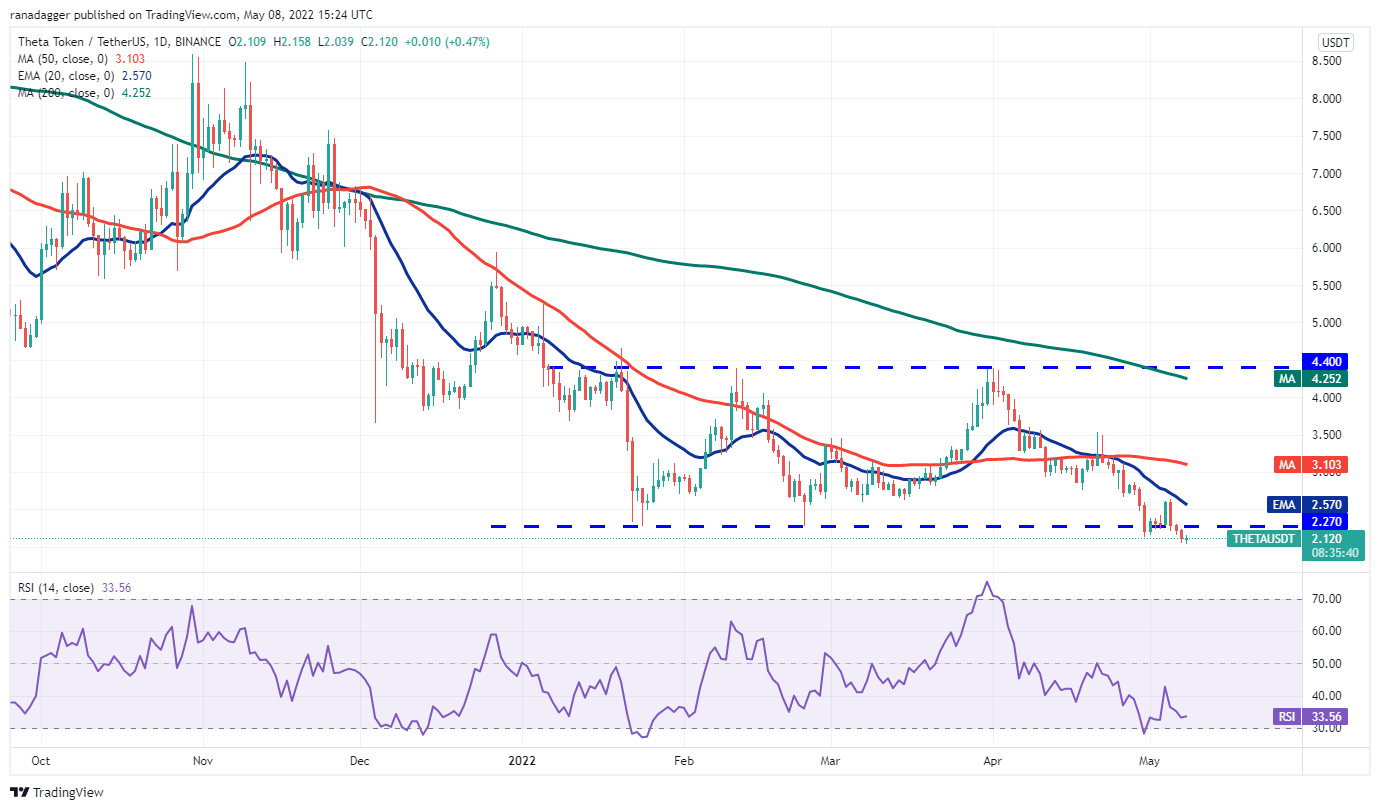 Although the 20-day EMA of $2.57 is sloping down, the RSI is attempting to form a bullish divergence, indicating that the selling momentum is weakening. If bulls push the price back above the breakdown level of $2.27, it could trap several aggressive bears who may have initiated short positions on the break below the range.The THETA/USDT pair could then rise to the 20-day EMA. This is an important level to keep an eye on because if bulls overcome this barrier, the pair could rally to the 50-day SMA of $3.10. This positive view could invalidate if the price turns down from the current level or the breakdown level at $2.27 and plummets below $2.00. 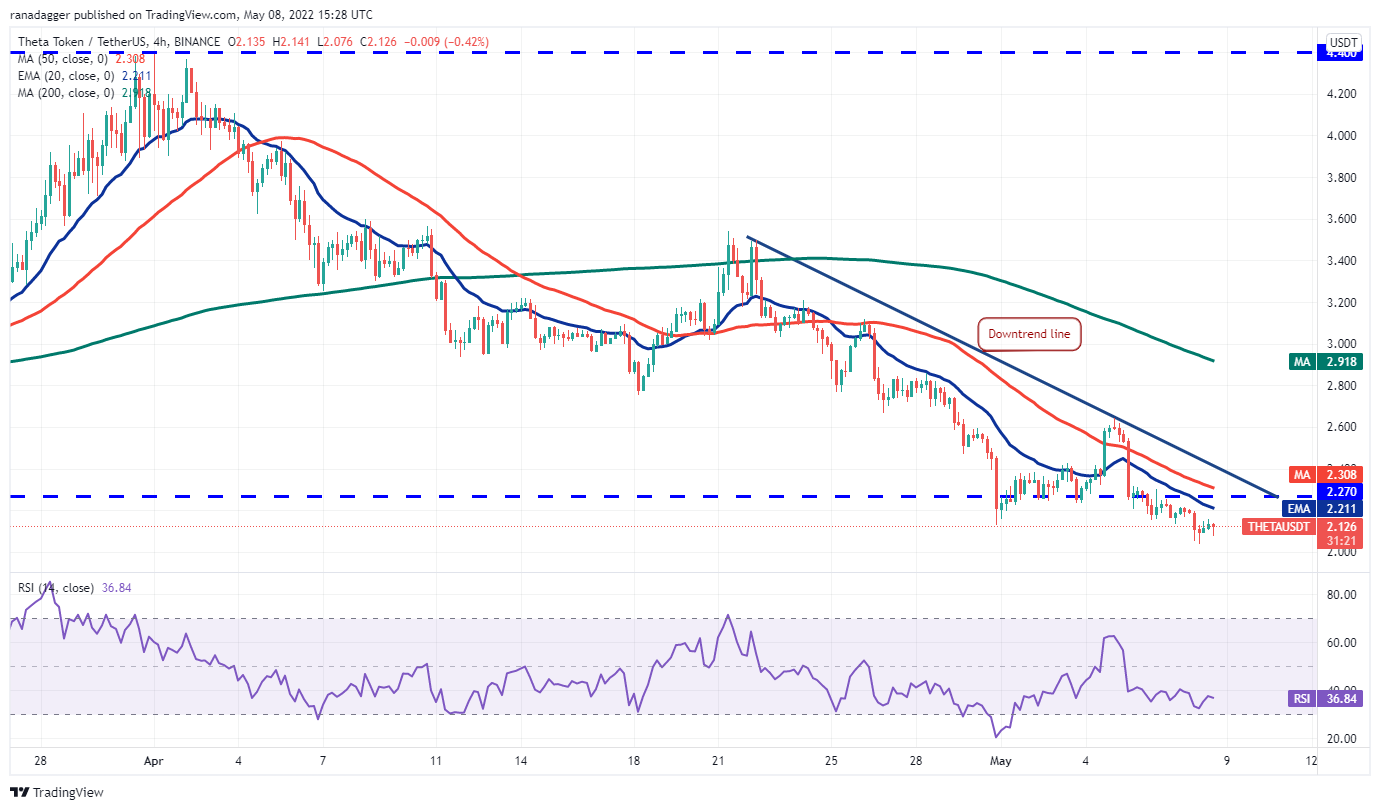 The bulls are buying the dips close to the psychological level at $2.00. If buyers drive the price above the downtrend line, it will suggest that the bears may be losing their grip. The pair could then rally to the overhead resistance at $2.64. This level may again act as a strong resistance but if buyers clear this hurdle, the bullish momentum may pick up.Contrary to this assumption, if the price turns down from the 20-EMA or the downtrend line, it will suggest that bears continue to sell on rallies. That could increase the possibility of a break below $2.00 and the resumption of the downtrend.The views and opinions expressed here are solely those of the author and do not necessarily reflect the views of Cointelegraph. Every investment and trading move involves risk, you should conduct your own research when making a decision.

Solana surpasses Cardano, Tether to become 4th-biggest crypto, worth $76B