Cryptocurrencies and sport have continued to collide in 2021 with synergies between the two proving to be fruitful on a number of fronts.The relationship between the sports world and the various applications of cryptocurrencies and blockchain technology has slowly been expanding over the past few years. Humble beginnings of simple sponsorships building early brand awareness for exchanges and payment platforms have snowballed into worldwide recognition and collaboration between the sectors, with 2021 seeing a variety of different use cases come to the fore.From the basketball courts of the NBA to the soccer fields of Europe, crypto continues to build exposure to new users and markets. In this New Years Special, Cointelegraph highlights the ever-growing relationship between crypto and sport through 2021.

Nonfungible tokens (NFTs) have become a household word over the past 12 months. The entertainment industry has been at the forefront of this expansion with artists, musicians, celebrities, brands, institutions and content creators diving headfirst into the NFT craze to serve fans and collectors their own unique digital collectibles. Sports have always been a mainstay of the entertainment industry, serving up unrivaled and unscripted moments that leave an indelible mark on fans around the world. In the past, one-of-a-kind collectibles and memorabilia gave lucky fans bragging rights over their friends and family. The emergence of NFTs has converted this to a digital domain where fans can acquire, trade and flaunt valuable NFTs on blockchain-powered marketplaces and platforms. The NBA has blazed the trail in this regard, turning video highlights from season games into NFT collectibles that have generated hundreds of millions of dollars of revenue through the NBA Top Shot platform. The most expensive NBA Top Shot NFT, a legendary card featuring a dunk from Lebron James, sold for a mind-boggling $230,000 back in October 2020. Those numbers are not to be scoffed at. And it only got better in 2021.The world of American Football has also entered the space at both a player and team level. Tom Brady has written himself into the NFL history books and has become a commanding figure in the business and entertainment world as a bi-product of his success on the field.He made headlines in April, launching his very own NFT marketplace called Autograph. The platform has onboarded the biggest names in American sports, as well as influential figures from the world of Hollywood’s actors, musicians and other entertainment figures to mint and sell unique digital collectibles.We’re talking about the likes of golf great Tiger Woods, sprint sensation Usain Bolt, skateboarding icon Tony Hawk, United States gymnast Simone Biles and, of course, Brady himself, all offering their own unique NFTs to collectors around the world.Coming next week on @Autograph: I’ve retired five signature tricks, offering them in a collection that will last forever. Here is one that I recently did for the last time: varial 540. This trick has caused me many whiplashes over 30 years but I had to see it through. @DraftKings pic.twitter.com/iK6T2vtTexBrady’s long-time NFL partner in crime Rob Gronkowski set the bar high with his own Championship Series NFT digital trading card auction before the launch of Autograph. The series consisted of four unique “GRONK Career Highlight Refractor Card,” each of which had 87 digital editions on sale, while a fifth stand-alone Career Highlight card was the prize card of the lot.The auction lasted two days and saw a total of 349 trading cards sold at auction, as well as the one-off Career Highlight card to 95 different owners. The total trading value of the auction was 1,014 Ether (ETH) valued at $1.8 million at the time of the sale. Gronk went on to join Autograph to launch other NFTs.English boxer Tyson Fury established himself as the best heavyweight in recent times after another crushing defeat of Deontay Wilder in October. Following that success, the burly British boxer launched his own NFT which was auctioned off for $987,000.In Europe, Sorare has established itself as a notable player in the football NFT and fantasy sports space. The Ethereum-powered marketplace facilitates the minting and trade of NFTs that have been hugely popular among football fans. Users can buy and trade digital player cards that reflect their real-life player’s performances. Collectors can build a five-man team made up of their digital player cards that compete in fantasy leagues. 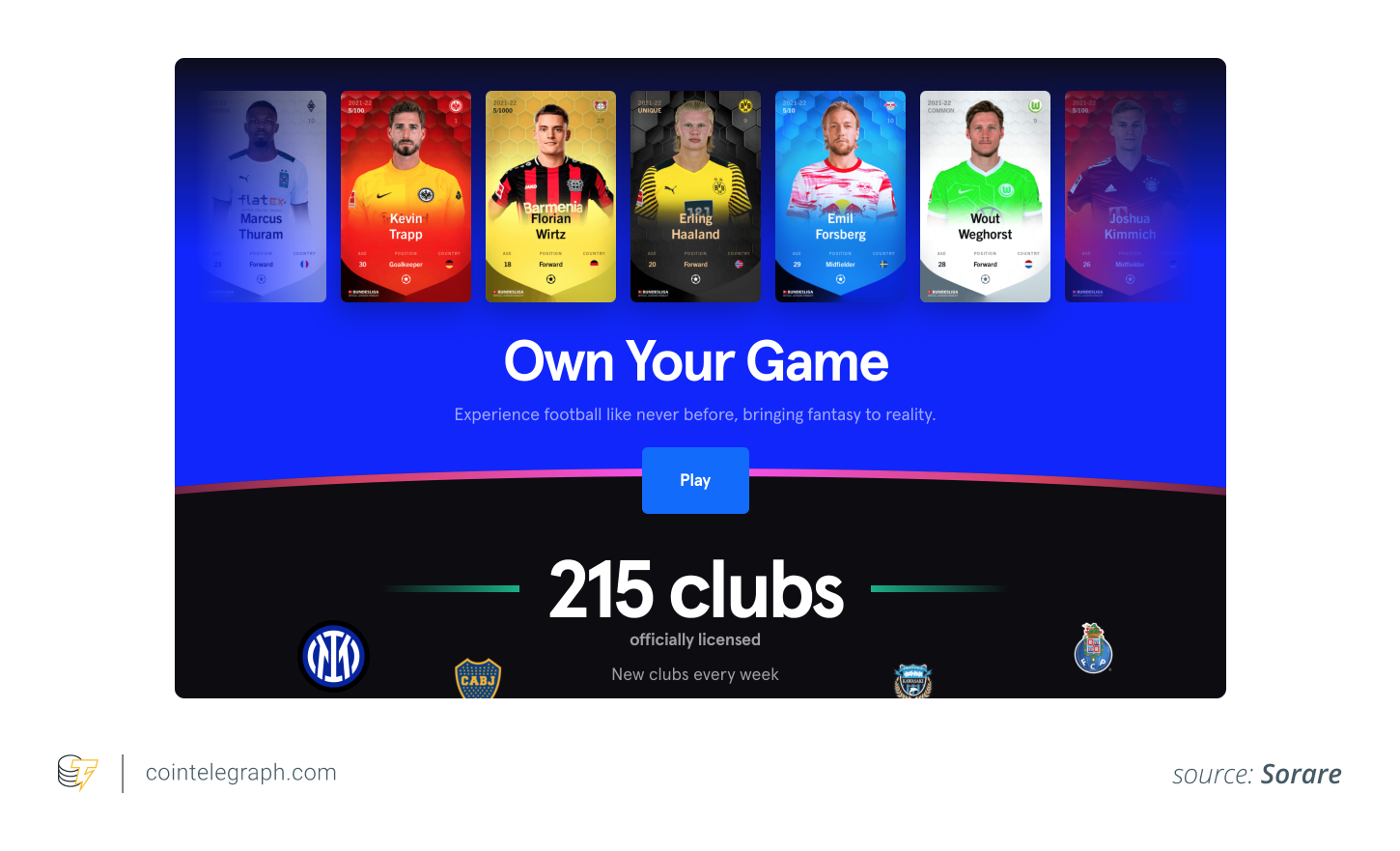 Socios is the other major player in the world of European football NFTs, digital trading cards and collectibles. The platform allows clubs to issue fan tokens on its proprietary blockchain that allows fans to vote on club decisions like kit changes, access exclusive content and get involved in other community activities. In 2021, Socios has sold $250 million worth of fan tokens since its inception while the market capitalization of the sports fan token space has increased by 60% in the last six months of the year. Sports brands are also looking to keep with the times, and the rise of the Metaverse has pushed two of the world’s largest sports brands into the space courtesy of strategic partnerships with industry participants.Adidas entered the NFT space by minting an NFT that will serve as a digital token that will give Metaverse users access to digital Adidas wearables. The NFT was made up of 30,000 copies, essentially tokens, that were auctioned. Its opening weekend netted more than 11,300 ETH in sales, worth $43 million at the time, as Metaverse users flocked to secure their Adidas swag. Impossible is (probably) nothing

10/10 pic.twitter.com/lHbwsthfZcDetermined to keep pace with its competitors, Nike followed suit by acquiring RTFKT, one of the biggest NFT collections on Opensea, in order to mint its own Nike wearables and items in the ever-growing Metaverse.

Marketing and advertising are big business and the world of sport has long been a prime means to reach large audiences to market products, services and offerings. Big brands have done it for decades to a great effect, and cryptocurrency firms and service providers are taking full advantage of it lately.Crypto.com’s branding can be seen on the soccer pitches of Europe’s biggest leagues, inside the massively popular UFC’s octagon and on the circuits of the gripping Formula 1 roadshow. The company has signed sponsorship deals with leagues, teams and organizations in all of these spaces to reach a varied and large viewership.Cryptocurrency trader and entrepreneur Sam Bankman-Fried and his cryptocurrency derivatives trading platform FTX have also enjoyed a good relationship with American sports this year. FTX acquired the naming rights to the Miami Heat Stadium early in 2021 in a $135 million deal that will last until 2040. From our fam to yours ❤️ pic.twitter.com/oHMg9VPIWFThe exchange also secured prime time commercial airtime for the 2022 NFL Super Bowl, one of the biggest sporting events in America, as it looks to attract new users. Coinbase, America’s largest cryptocurrency exchange, scored a big slam dunk with the NBA after securing a multi-year deal to be the exclusive cryptocurrency platform partner of the league and its various subsidiaries, associated leagues and brands.Rugby is a massive sport in South Africa and the country’s Springbok national team has a big support base being the reigning World Champions. When the British and Irish Lions toured South Africa, cryptocurrency exchange Luno ran a commercial that featured the Springboks’ director of rugby Rassie Erasmus coached viewers on “how easy it is to tackle Bitcoin,” as the exchange looked to target a large viewer base to begin trading cryptocurrencies on its platform. This is a prime example of localized and global advertising taking cryptocurrencies to broader audiences, which is only set to introduce more people to a space that hopes to move to mass adoption in the decades to come. 2021 has seen some major groundwork on this front.

Turn that $ into BTC

A number of sports stars have begun blazing a trail for people to begin accepting or allocating a portion of their salaries to receiving or buying cryptocurrencies. NFL players have made headlines again with contributions from Odell Beckham Jr and Aaron Rodgers, Trevor Lawrence and Saquon Barkley by either receiving or investing in cryptocurrencies. Tom Brady pops up again here after he acquired an equity stake in Bankman-Fried’s FTX that will see him receive payments in cryptocurrency in addition to being a brand ambassador for the firm.Down under in Australia, baseball club Perth Heat signed a deal with Bitcoin payment processor OpenNode to pay some of its players and staff in BTC. Again, adoption is taking place in decentralized parts of the world.

There have been individual instances where cryptocurrency and the sports world have collided. For a third time, Tom Brady is mentioned and for an equally good reason. In October, Brady became the first NFL quarterback in history to throw 600 touchdown passes. He whipped the ball to teammate Mike Evans who scored the touchdown. The Buccaneers wide receiver threw the ball into the crowd after he’d scored, handing over a priceless piece of memorabilia to a lucky fan.During the game, an official managed to chat to the fan and Brady went on to offer the lucky onlooker 1 Bitcoin (BTC) to give him back the historic ball. That 1 BTC was worth $62,000 while estimates of the value of the actual ball that completed the milestone were worth anything between $500,000 and a million dollars.It hasn’t been all good news with a few mishaps taking place through 2021. Manchester City and Barcelona, renowned in their respective leagues, had to cancel deals with smaller cryptocurrency firms for different reasons, which served as a reminder that the space is still nascent and some projects and firms may not deliver on the products and services they are looking to offer.Spanish football legend Andrés Iniesta was cautioned online by a Spanish regulator for promoting Binance on his Twitter and Instagram profiles. The National Securities Market Commission (CNMV) warned of “significant risks due to being unregulated products” in a Tweet in response hours later.It’s fairly innocuous but it does suggest that the integration of cryptocurrencies and associated offshoots into the world of sport can sometimes border on the realm of the unknown. Some things work fantastically and gain traction while others don’t enjoy the same success, but the adoption train still carries on going.

SEC chair has a new senior adviser for crypto

Crypto, like railways, is among the world’s top innovations of the millennium

How smart regulation can improve the future of blockchain