Bitcoin (BTC) bulls took another beating on Dec. 17 as a midday onslaught dropped the price to $45,500. The price did manage a quick bounce back to $47,000 but sweeping a new daily low could be a sign that additional downside is in store.Amid the wider market downturn, several altcoins provided weary traders with a source of refuge as token buybacks and increased network activity helped bolster their prices and provide shelter from the storm. 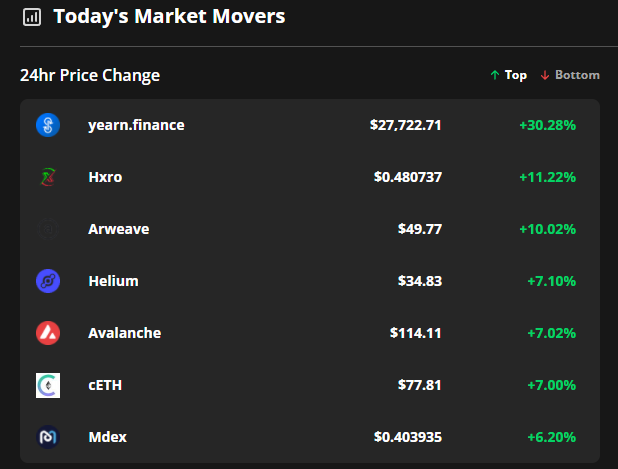 Data from Cointelegraph Markets Pro and TradingView shows that the biggest gainers over the past 24-hours were Yearn.finance (YFI), Hxro (HXRO) and Arweave (AR).

Yearn.finance is a decentralized finance (DeFi) aggregator service that utilizes automation to allow investors to maximize their profits from yield farming. Data from Cointelegraph Markets Pro and TradingView shows that after hitting a low of $18,844 on Dec. 15, the price of YFI shot up 56.48% to a daily high of $29,488 on Dec. 17 as its 24-hour trading volume spiked 220% to $844 million. 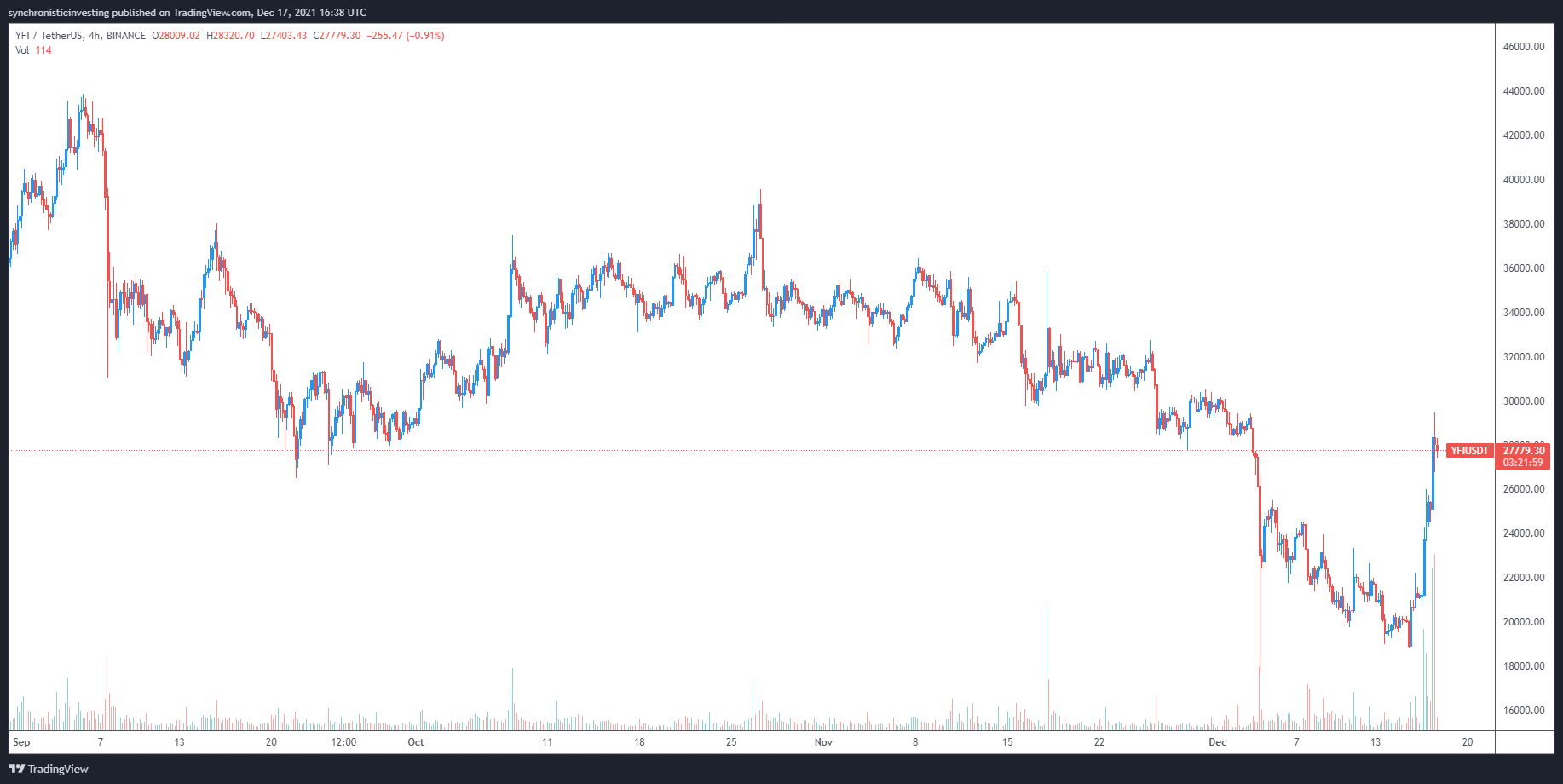 The sudden surge higher in YFI comes as the project revealed that it has been buying back tokens since November after the community voted to improve the tokenomics for YFI. To date, the protocol has purchased 282.4 YFI at an average price of $26,651 and has indicated that further buybacks will be conducted in the future using funds from the project’s $45 million treasury.

Hxro is a cryptocurrency options trading protocol that operates on the Ethereum (ETH) network and offers users access to popular cryptos including BTC, Ether, Dogecoin (DOGE) and Solana (SOL). VORTECS™ data from Cointelegraph Markets Pro began to detect a bullish outlook for HXRO on Dec. 14, prior to the recent price rise. The VORTECS™ Score, exclusive to Cointelegraph, is an algorithmic comparison of historical and current market conditions derived from a combination of data points including market sentiment, trading volume, recent price movements and Twitter activity. 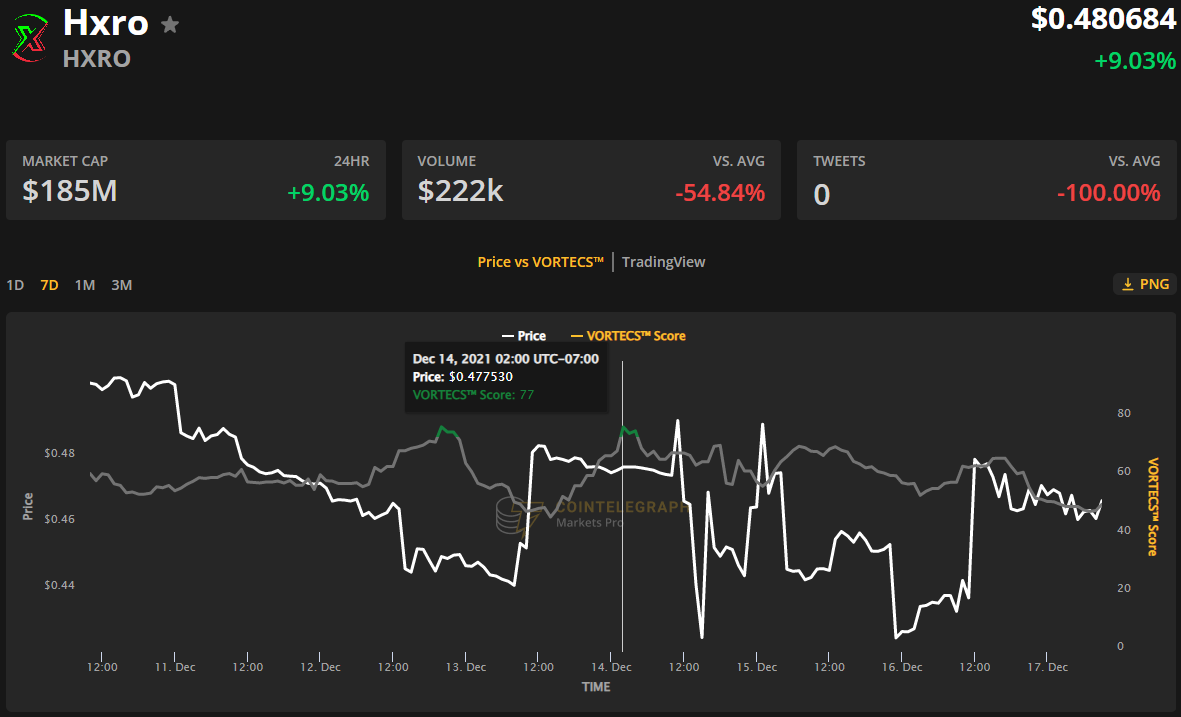 As seen in the chart above, the VORTECS™ Score for HXRO elevated into the green zone on Dec. 14 and reached a high of 77 around 45 hours before the price increased 13.2% over the next day. The boost in HXRO price comes after the co-founder of Dan Gunsberg was featured on the TD Ameritrade Network’s Market on Close podcast discussing the future of Bitcoin and the evolution of the wider cryptocurrency ecosystem.

Arweave is a decentralized storage network designed to be the first truly permanent information storage network that is backed by a sustainable endowment. VORTECS™ data from Cointelegraph Markets Pro began to detect a bullish outlook for AR on Dec. 14, prior to the recent price rise. 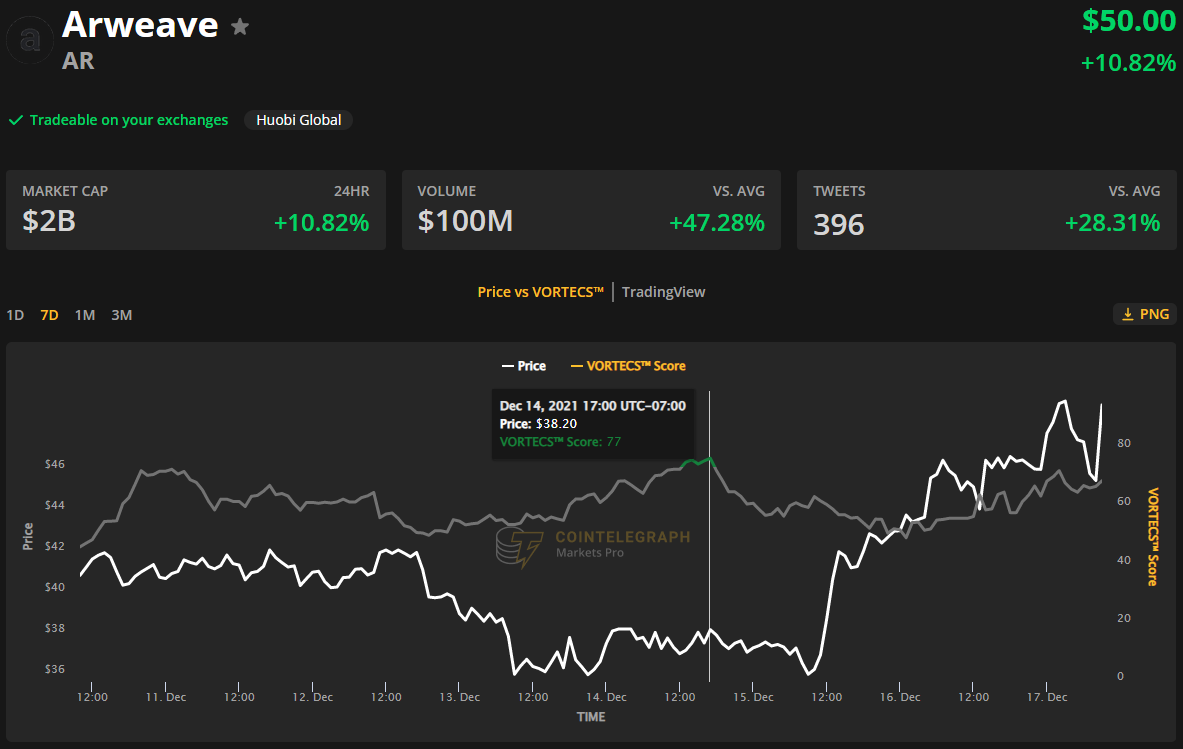 As seen in the chart above, the VORTECS™ Score for AR climbed into the dark green zone on Dec. 14 and hit a high of 77 around sixteen hours before the price increased 40.78% over the next two days. The move higher in the price of AR comes as the transaction count on the protocol’s Bundlr Network hit a new all-time high of 2.19 million transactions which marked a 50x increase in the maximum daily transactions from less than a year ago. The overall cryptocurrency market cap now stands at $2.192 trillion and Bitcoin’s dominance rate is 40.6%.The views and opinions expressed here are solely those of the author and do not necessarily reflect the views of Cointelegraph.com. Every investment and trading move involves risk, you should conduct your own research when making a decision.